9NEWS’ Jeremy Jojola follows up on a story first broke by the Colorado Times Recorder about one “Chevy McGee,” a local anti-government “Boogaloo Boi” militant connected with Bradley Bunn–who was busted with pipe bombs after attempting to organize an illegal open-carry armed protest with McGee at the Colorado State Capitol on May 1.

Jojola reports McGee says he just happened to be at the protests on Friday night with a trunk full of assault rifles, and despite everything you’ve heard about his buddy Bradley Bunn and the “Boogaloo” movement there is absolutely no relationship between those two data points:

“We were stopping by the protest to see what was going on and provided medical and water to people,” McGee said over text messages. [Pols emphasis]

McGee said the guns and tactical gear were in the trunk of his vehicle while he was out at the protest.

“… we are avid shooters so we always keep our guns in the trunk as we often go shooting,” McGee added over text…

Recall what Erik Maulbetsch of the Times Recorder reported about McGee’s role in the abortive May 1 armed protest:

McGee and Bunn were among a group of gun rights activists who intended to open-carry firearms at the state Capitol during the May Day “Reopen Colorado” protest. Open carrying is illegal in Denver, but they hoped to have so many armed supporters that police officers would decline to enforce the law. 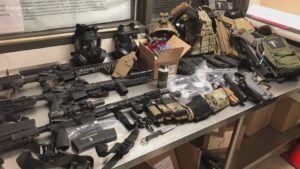 It was “Chevy McGee” who posted the manifesto to Facebook calling on like-minded individuals to show up at the state capitol on May 1 with their weapons “hot, locked, and ready to rock,” and outlining various hypothetical situations in which the group might start shooting at police during this event. Photos of the weapons seized from McGee at the protest Friday night include assault weapons and high capacity magazines that are illegal in the city of Denver. We don’t know the full circumstances of the police contact that led to the weapons being seized, but we don’t believe for a minute that this guy was at Friday night’s protest armed to the teeth for benign purposes.

Also proudly posting his protest pics to social media this weekend is another far-right militant readers may recognize, “Proud Boy” Level 2 Louie Huey (photo top right), who has been in the news a few times recently–from helping stink up the reputation of local right-wing talk radio station 710 KNUS to mixing with the crowds at anti-vaxxer protests and Trump rallies.

Level 2 Proud Boy Louie Huey is very proud of the rubber bullets he took to the chest:

Now folks, what do you think one of the state’s leading fascist agitators was doing out there in the streets of Denver when he got hit with these rubber bullets? “What everyone else was doing” is the answer we would naturally expect from a lot of readers.

Except he wasn’t doing what everyone else was doing. The “anti white guilt” Proud Boys, in case there was any lack of clarity on this point, do not support the Black Lives Matter movement. Huey’s rubber bullet wounds tell us that a fascist agitator was in the vanguard of the violent protests that took place after curfew, inciting others through his actions to commit crimes in order to discredit the entire movement.

And with that, the marked difference between the peaceful daytime protests and mayhem in the streets at night in Denver over the past few days becomes that much more suspicious.