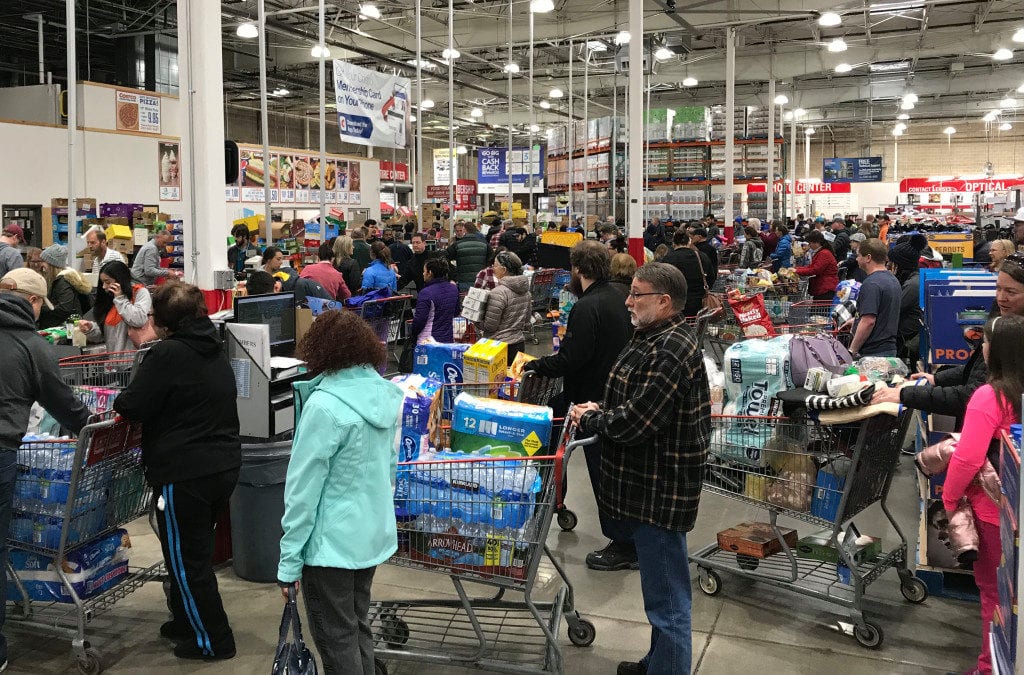 “People are rude; everybody’s scared and in a bad mood,” said Thornton resident Ashley Parker as she shopped at a King Soopers. “Not a single container of hand soap.”

Supplies wiped out first in stores across the Denver area include toilet paper, hand sanitizer, medicines and cleaning supplies, but others followed. Despite the bleak appearances in produce and meat sections everywhere, food retail representatives urged restraint from customers.

Shelves will be restocked and supplies restored, said Chris Howes, president of the Colorado Retail Council. The supply chain isn’t broken, so customers should buy only what they need and wait for the rest.

“The bridge isn’t out; the pass isn’t closed; the port isn’t damaged,” Howes said. “Just because we’re out of something in the short run, doesn’t mean we’re out of product.”

Restocking may take a few weeks, Howes said. But it will happen, and supplies will be distributed evenly among the state’s stores.

Many customers murmured about the virus, which causes the respiratory illness COVID-19, as they waited in lines reaching to the back of stores. Shopping carts grew scarce.

The request for patience does little to help Delores Davis, who said she couldn’t find all of the few items she sought from the Safeway at North Washington Street and East 22nd Avenue.

The 71-year-old woman said she is scared of what the virus might bring and will have to return for more food in a few days.

“I passed by a lab place the other day and said, ‘I sure hope they’re working on something,’ ” Davis said. “I’ll just go home and cook the best I can.”

Caitlin Plante had a similar experience at the Trader Joe’s on Logan Street and 7th Avenue in Denver. The store was completely out of frozen foods such as meat, vegetables and waffles. The pasta and soup aisles sat empty, and dairy, bread, eggs, fresh meat and produce also ran low.

“It’s really scary to see empty shelves,” Plante said. She wasn’t shopping to stock up but rather for a regular visit to the grocery store. “I normally never notice when we’re out, then I noticed we only had two things of shampoo left and one thing of coffee. It’s weird; you never notice what you’re out of.”

Shoppers at a King Soopers on 104th Avenue in Thornton braved extra long lines. People raced inside as produce and meat sections dwindled and only blank spaces remained where cold and flu medicines once sat.

Parker said she went to King Soopers to stock up on her normal supplies and ran into the massive crowd and short supplies.

Customers should resist the temptation to hoard, Howes said. Someone else could be in dire need.

Shoppers should also be patient with employees, take care to clean shopping carts, and avoid sneezing or coughing on produce, he said.

“Give the clerk at the point of sale a break; they’re having a hard time too,” Howes said.

In all, the Retail Council represents about 500 stores in Colorado, including Safeway, King Soopers, Walmart and Target locations, he said. So far, stores have yet to see any staffing problems as reports of the virus rise.

As of Friday afternoon, a total of 72 people were presumed to have contracted the virus, and the state’s first death was reported in El Paso County, according to the Colorado Department of Public Health and Environment. Thirteen of those cases are in Denver County.

Despite the run on groceries, cannabis dispensaries have largely been exempt from a similar hit. They’re stocked and ready for customers.

Dispensary representatives said they’re taking precautions to mitigate the spread of the virus, including having staff members wear gloves, offering hand sanitizer to staff and customers, and prohibiting buyers from putting their faces near marijuana jars to smell the product.

Some Denver dispensaries reported a slight decrease in business.

John Romero, assistant general manager of Rocky Mountain High Dispensary, said the company’s suburban locations have experienced a slight uptick in recent sales, though its LoDo store has not.

“We are a very touristy location,” Romero said, “so (a decrease in sales) could possibly be because of the restriction on travels and people not traveling as much.”

But traffic at Terrapin Care Station dispensaries is “definitely higher,” said communications director Peter Marcus, citing full waiting rooms at the company’s six locations in Denver, Longmont, Boulder and Aurora. The dispensaries began stocking up on their most popular items three weeks ago and are not experiencing product shortages, he added.