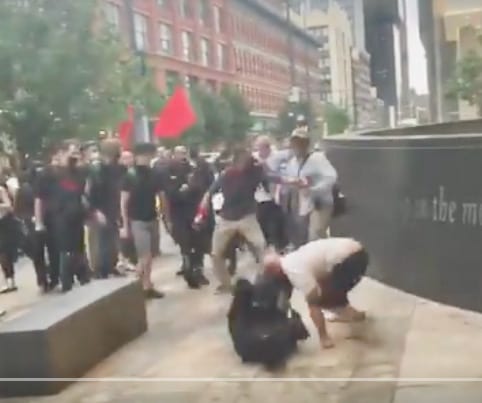 The Denver Post is either straight up lying or the most incompetent media outlet that covered the Western Conservative Summit over the weekend and resulting protest by leftist whacktivists.

Because according to the there was no protest:

Compare that headline to The Washington Times’s coverage:

As he spoke, several police officers stood sentry in front of the stage to protect him; they left when he left the stage. Ngo is often a target of protests, and Westword reported that a range of progressive groups, including the Denver Communists, would protest outside the Hyatt — an event dubbed the “Western BLM-Antifa Summit.” But no protesters were spotted inside or outside Saturday.

Got that? No. Protestors.

Meanwhile, here are some of the protestors who weren’t spotted by the Denver Post:

Antifa violently confronted a purported attendee of the Western Conservative Conference in downtown Denver. The antifa gathered & waited for attendees who were leaving the Hyatt Regency. (I am speaking there.) Video by @ElijahSchaffer: pic.twitter.com/m2tBMPjDri

DENVER: Riot police have been deployed as attendees leave the Western Conservative Conference.

Unfortunately the majority of her milkshake missed her mouth. pic.twitter.com/zIGo3xcLZA

This is outside the Western Conservative Summitt in Denver pic.twitter.com/jisO6pwP3R

This is one of our favorites, an antifa protestor harassing and threatening a “fuck the police” protestor:

ANTIFA member who goes by “Vixie” attacks an anti-police protester for filming at the event.

She was one of many violent members tasked with attacking anyone who was caught filming. pic.twitter.com/iMwzItWAXf

Those white and green lights self-identified members of Antifa are flashing at me? They’re intended to break my phone’s camera and blind me by burning my retinas. I do have a mild headache, but I stayed mostly safe by leaving after men told me they would break my phone or else pic.twitter.com/NhKbHHlck2

Maybe that’s why the Denver Post didn’t see any protestors, they were blinded by laser beams.

You can read reports by other media outlets about the protests the Denver Post didn’t see here, here and in the