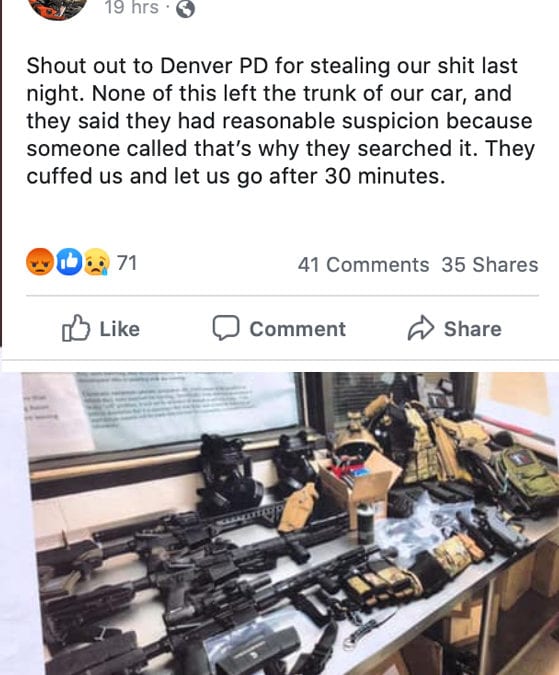 Most peaceful protesters had left downtown Denver by the time police searched a car that had been occupied by a group of young men, one of whom was wearing a military-style vest.

They found several semi-automatic assault rifles, numerous magazines and other weapons in the trunk.

CPR reporter Allison Sherry tweeted an image of the seizure:

Chevy McGee, a 20-year-old anti-government gun enthusiast who lives in Fort Collins, claims to own some of the weapons.

In a May 30 Facebook post, McGee shared the same image, writing, “Shout out to Denver PD for stealing our shit last night. None of this left the trunk of our car, and they said they had reasonable suspicion because someone called that’s why they searched it. They cuffed us and let us go after 30 minutes.”

McGee also alleges in the Facebook protest that the officers told him someone called the police after seeing one of his group wearing a military-style plate-carrier vest, which allows the wearer to add ballistic protection. McGee states that neither he nor his associates open-carried their rifles.

“Open carry is illegal in Denver and we did not have enough guys to open carry so I don’t wanna hear it,” wrote McGee on Facebook.

CBS Denver featured a portion of McGee’s May 1 livestream as part of its report on the Federal Bureau of Investigation’s arrest of his associate Brad Bunn for possessing pipe bombs.

McGee and Bunn were among a group of gun rights activists who intended to open-carry firearms at the state Capitol during the May Day “Reopen Colorado” protest. Open carrying is illegal in Denver, but they hoped to have so many armed supporters that police officers would decline to enforce the law.

Their plan fell apart due to the FBI and Larimer Sheriff’s raid on Bunn’s house the morning of the May 1 rally.

McGee, who describes Bunn as “one of our boys,” claims he was then followed by law enforcement and, while still livestreaming, drives to his house, where he argues with his mother.

McGee describes himself as a “Boogaloo Boi,” which is a slang term for a gun activist who believes that armed conflict against the government —a “boogaloo”— is inevitable.

JJ MacNab, a fellow with the Program on Extremism at George Washington University and one of the nation’s leading expert’s on anti-government groups chronicled McGee’s livestream via Twitter. The video was deleted when McGee shut down his old Facebook account, but the Colorado Times Recorder was able to confirm the accuracy of MacNab’s description.

So, a 20 year old Boogaloo boi who still lives with his parents talks a big game about killing cops and feds, decides to confront his mom to make sure she hasn’t called the cops on him.

It does not go well for Chevy. https://t.co/KyZ3Lr2DAo

During the course of the argument, McGee describes his rifle as having a short barrel, which is illegal unless the weapon is registered with the Bureau of Alcohol, Tobacco and Firearms (ATF). None of the rifles pictured in the Denver Police photo appear to have a short enough barrel to qualify for the ATF restrictions.

Along with his strong anti-police sentiment, McGee expressed his support for the George Floyd protesters and Black Lives Matter movement by posting a photo with signs in front of a Fort Collins police station on May 28.

He also livestreamed his participation in the Friday evening protest in Denver, which primarily consisted of offering water to other protesters and shouting profanity at police officers. No firearms are visible.

In cities without open carry restrictions, such as Salt Lake City, Boogaloo supporters have attended similar protest this weekend while carrying rifles:

Armed men have arrived outside the @slcpd public safety building. They say they’re here to protect the protesters. #GeorgeFloydprotest pic.twitter.com/LsEql9TItF

McGee did not immediately respond to a Facebook message requesting comment. If reached the Colorado Tiems Recorder would ask McGee how large a group of Boogaloo Bois he believes are needed to open carry in violation of Denver’s ordinance.

An email inquiry to the Denver Police Department about the incident was also not immediately returned. This post will be updated with any responses received.