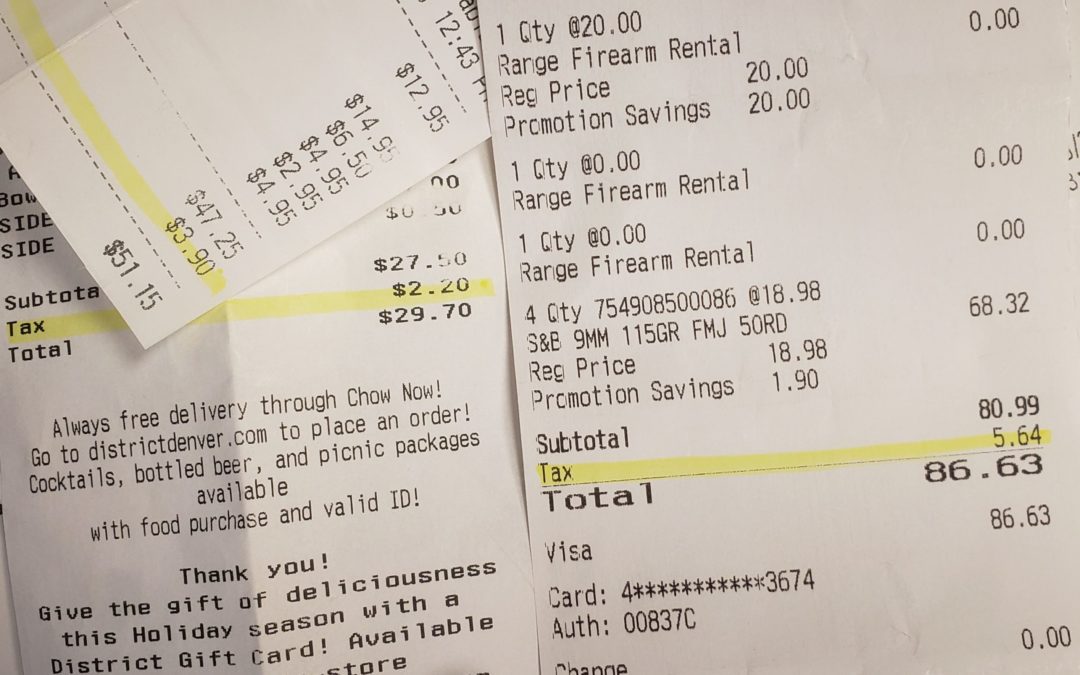 These tax increases have come without voter consent, raising the question of whether sales tax rates should be lowered to offset the increases.

On June 21, 2018, the U.S. Supreme Court ruled in South Dakota v. Wayfair that South Dakota can require collection of its sales tax on sales to its residents by out-of-state internet retailers. The 5-4 decision overruled two earlier precedents, National Bellas Hess, Inc. v. Illinois Department of Revenue (1967) and Quill Corp. v. North Dakota (1992), which held that a state or local government could only require businesses with a physical presence in the state or locality to collect and remit sales taxes. The new decision turned the table, allowing state and local governments to require out-of-state retailers to collect and remit sales taxes on purchases made within the state or locality.

The court decision effectively created a backdoor for the State of Colorado and local taxing districts to increase the amount of sales taxes paid by residents without amending tax rates or seeking voter approval. The state began collecting these new taxes back in 2019, which has already cost Coloradans around $100 million to date. Denver will begin collecting this year.

The Colorado Department of Revenue (DOR) wasted no time in exploiting this new ruling to increase state revenues without a public TABOR vote. On December 1, 2018, less than 6 months after the landmark ruling, DOR promulgated new rules, which “require that all out-of-state retailers collect and remit sales tax when they ship goods into the state.”[i] The General Assembly codified the rules in the following legislative session with HB 19-1240, signed into law on May 23, 2019.

While the rules and subsequent legislation imposed a mandate on out-of-state businesses, the cost of the new mandate—or in economic terms, the “incidence” of the tax—falls on Colorado residents. DOR’s explains, “The [sales] tax is paid by consumers and collected by vendors on the state’s behalf.” Put simply, the new mandate effects a tax increase on Coloradans. The state legislature, however, did not place the measure on the ballot for voter approval.

While the COVID-19 pandemic likely pushed actual collections downward in 2020 and early 2021, the tax changes will permanently increase the sales tax base even as retail sales recover in the coming months. In other words, retail sales declined for a time, but this tax increase is here to stay and will produce a permanent new stream of revenue to the state.

The City of Denver will follow suit with the state this year, though their public documents display less candor in discussing the source of the newfound revenue. The city’s 2021 budget claims that by integrating with the state’s Sales and Use Tax System (SUTS) Denver can “start collecting sales tax from third-party sellers on large online platforms.” The mayor’s budget almost reads as though integrating with state tax collection software will somehow increase tax collection efficiencies and thus increase revenues. It’s misleading at best. The language might also give the impression that new revenues are coming from big online businesses from out of state, not that the new tax is charged to Denver residents.

Buried in the 900-page budget document nowhere near the primary discussion around sales tax, a reader finds something a little closer to the truth but still wildly missing the mark. There the document calls the tax increase “revenues returning to the city and as a result of new sales tax revenue associated with out-of-state retailers.” At least here the mayor’s office admits that this is “new sales tax revenue,” though it’s strangely contradictory to call them “revenues returning to the city” in the same breath.

Clearly, the drafters of the city budget bent over backwards to avoid telling Denverites the truth: the city has found a way to increase sales taxes by millions of dollars annually without voter consent.

The city expects the tax policy changes to begin generating new revenues starting in the second quarter of 2021, resulting in an increase of $14.3 million in sales tax revenue this year. Retail sales are still down this year due to the pandemic, and this estimate only accounts for a partial year of tax collections. As retail sales recover and the city becomes more efficient and effective at enforcing the new rules, taxpayers should expect to pay in excess of $20 million in new sales taxes in coming years. The city budget does not provide an official forecast beyond 2021.

The City of Denver’s refusal to ask residents’ permission for this tax increase could be seen as a betrayal of public trust, especially since the city has received permission from voters to increase the sales tax just about every time such a question has appeared on the ballot in recent years.

In 2020, voters approved a .25 percent increase in Denver’s sales tax—the Homelessness Resolution Tax—to combat the city’s growing homelessness crisis. This came only two years after voters approved a sales tax increase to create the Caring for Denver Fund and program, also intended in part to address issues prolific in Denver’s homeless communities. Other recent voter-approved sales tax increases include a .08 percent increase for the Denver College Success Corporation and the Denver Preschool Program. The cumulative state and local sales tax rate in Denver currently stands at 8.81 percent, one of the highest in the state.

Ironically, the burden of each of these sales tax increases—most of which are intended to help the poor and disadvantaged—fall most heavily on lower earners. According to the Colorado Department of Revenue, “The effective tax rates of local taxes were substantially more regressive than that of state effective tax rates, largely due to local property taxes and local sales taxes.” Due in large part to local governments’ heavy reliance on regressive taxes to fund operations, particularly the sales tax, DOR concludes that the overall tax burden in Colorado is regressive, meaning the effective tax rate is higher for low earners than for high earners. If Denverites want to see a less regressive tax code at the local level, increasing sales taxes is one of the worst ways to get there.

Colorado and Denver have both increased their sales tax revenues—and the cost of the sales tax to their own residents specifically—by adopting new rules for the collection and remittance of sales tax from out-of-state retailers on the purchase of goods brought into Colorado. Rather than increasing sales tax revenues by raising the tax rate, this has allowed them to increase tax revenues by effectively broadening the sales tax base. By increasing taxes in this way, both have managed to increase tax revenues without voter consent in spite of the requirement in Colorado’s Taxpayers’ Bill of Rights (TABOR) that “any new tax…or a tax policy change directly causing a net tax revenue gain to any district” be approved by a vote of the people.

Voters have repeatedly approved sales tax increases when asked at the ballot box, particularly at the local level. Increasing sales taxes without voter consent betrays public trust and the spirit of TABOR. It also makes our tax code even more regressive, hurting those residents on the lower end of the economic ladder most. If state and local officials feel they need to generate more revenue, they should just ask.

In the meantime, the State of Colorado and City of Denver should either reverse the tax policy changes that caused this tax increase, or citizens should consider a ballot initiative to lower the sales tax rate, offsetting the tax increase promulgated without voter consent.