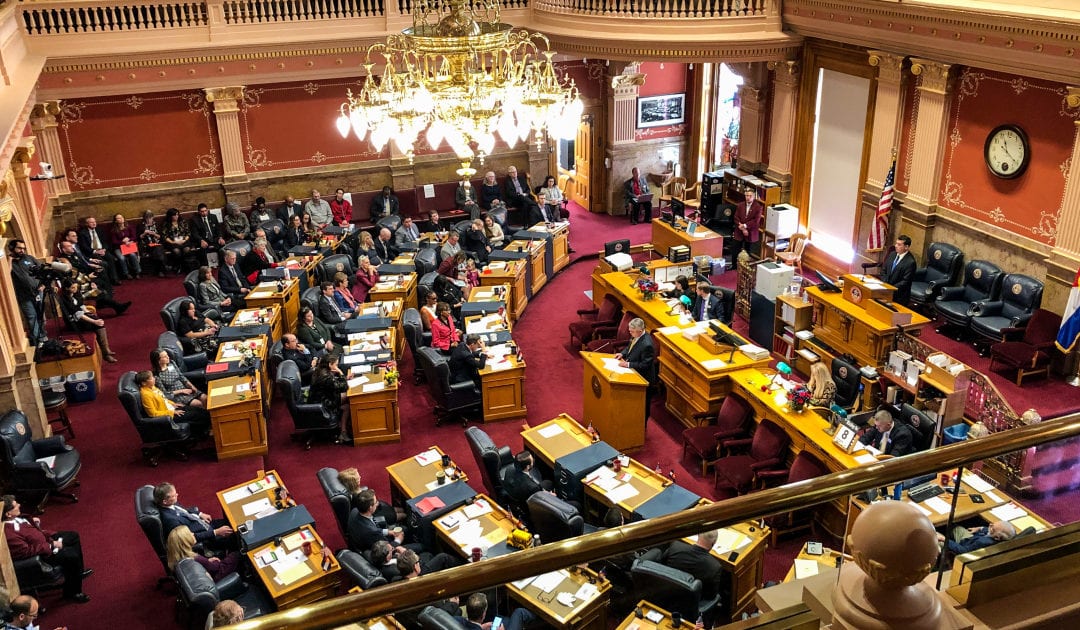 Republicans in Colorado look unlikely to reclaim the state Senate majority they lost two years ago, observers from both sides of the aisle say, relegating the party to another two years in the background as Democrats control Colorado’s government.

The party is grappling with an election year that forces them to play defense and the unpopularity of President Donald Trump, who could harm down-ballot candidates. Less than three months to the election, GOP lawmakers and candidates say they remain optimistic about their odds, but most acknowledge they are just hoping to hold control of three key swing seats Democrats want to win.

“Flipping the Senate is going to be a pretty heavy lift,” said Republican strategist Ryan Lynch. “I think the hope out there is that we’re able to maintain the status quo going into redistricting.”

Republicans need to gain two seats in order to retake control of the upper chamber and disrupt the complete power Democrats have over lawmaking in Colorado. Along with a 19-16 majority in the Senate, Democrats hold a 41-24 advantage in the state House and Gov. Jared Polis isn’t up for reelection until 2022. At best this year, Republicans are looking to regain a couple of House seats they lost in 2018.

In 2018, Democrats seized power and have passed legislation to require employers to provide sick leave, set pollution reduction targets to address climate change, added new police accountability measures and toughened regulations on the oil and gas industry. The party’s lawmakers are pledging to take on other progressive priorities should they remain in control and prioritize increased funding for transportation, education and health care.

“A majority will continue (to) help ensure we will be able to deliver on the types of policies we’ve passed,” Senate President Leroy Garcia, D-Pueblo, said in an interview.

In addition to flipping two seats, Republicans need to win every seat they currently hold and stave off Democratic challengers in open seats. It’s a big ask, and some Republicans believe that the party is more likely to have a net loss of one seat than it is to gain any. Democrats said they feel confident about holding the seats Republicans are targeting.

The electoral fortunes are a big reversal from the predictions from GOP leaders in the past two years. Conservatives suggested that voters would see the downsides of one-party control and Democratic overreach and demand a return to split partisan power at the Capitol.

Republican Senate leader Chris Holbert declined an interview request, but in a statement the lawmaker from Parker said voters in swing districts want bipartisan powerbrokers. “Putting Republicans back in control of the state Senate would provide balance, which is what those voters tell us that they want,” Holbert said.

GOP strategist Andy George, who ran the Republican state Senate campaign operation for more than a decade, said the party is facing an unfavorable map this year and is forced into a defensive stance. “Even is the best outcome they could hope for,” George said.

The most vulnerable state Senate seat for Democrats is believed to be the 19th District, which sits in Jefferson County and includes part of Denver’s northwest suburbs around Standley Lake.

Rachel Zenzinger, an Arvada Democrat, won the seat from Republican incumbent Laura Woods in 2016. The district has more unaffiliated voters than it does members of any political party and continues to trend in that direction, according to an analysis from conservative-leaning Magellan Strategies.

Republicans hope Zenzinger’s support for progressive policies during her term will alienate those unaffiliated voters. Jesse Mallory, who was chief-of-staff for Republicans the last time they held the Senate, from 2015 to 2018, and is now a senior advisor for Americans For Prosperity Action, said he thinks Zenzinger may have voted for more liberal bills than her constituents would be comfortable with.

But Zenzinger says her record is bipartisan and her independent-minded voters will see through the criticism. “They just don’t buy into those kinds of partisan attacks,” she said. To buttress her support, she also landed the endorsement of the pro-business, conservative-leaning Colorado Chamber of Commerce.

Though unaffiliateds now make up over 40% of her district, there are still slightly more Democrats than Republicans in it. Zenzinger also has a significant fundraising edge, having hauled in eight times more money than her Republican opponent Lynn Gerber, according to campaign finance records analyzed by The Colorado Sun.

Campaign funds allow candidates to spend on materials like mailers and flyers and also serve as an indicator of how much support they have and how well their campaign is run.

In the eyes of many Republicans, their next-best chance for picking up a seat is District 26 in Arapahoe County, which is held by Greenwood Village Democrat Jeff Bridges.

Bridges, who previously served in the House, was appointed to the seat in 2019 after the resignation of his predecessor, Daniel Kagan.

November’s election will provide all voters in his district with their first chance to weigh-in on that appointment. But many Republicans see their chances in that district as even less favorable than in the race to unseat Zenzinger.

Like Zenzinger, Bridges has a large fundraising edge, raising more than 10 times what Republican challenger Robert Roth has collected, according to campaign finance records. Arapahoe County was long a politically moderate part of the state, but Democrats swept into power in that area in 2018, led by U.S. Rep. Jason Crow, who defeated five-term Republican incumbent Mike Coffman. Voters also pushed out other Republicans, including Sheriff David Walcher, County Clerk Matt Crane and state Rep. Cole Wist.

Democratic lawmakers and strategists believe they are likely to hold Bridges’ seat. Senate Majority Leader Steve Fenberg, D-Boulder, said he thinks Bridges has served his district well and hopes he will be rewarded for it. “He is a good, solid representative of that community,”  Fenberg said.

Republicans are most vulnerable in formerly friendly seat

Republicans are two seats away from a majority, but that’s only if the party is able to hold on to all of its other seats. In all, 18 seats are in play this cycle. And on paper the breakdown would appear to favor Republicans.

GOP incumbents occupy four seats up for grabs, Democrat incumbents hold seven, and seven others are open. But two of the Republicans seeking reelection are facing tough challenges from Democrats and one of the open seats, formerly held by a Republican, is at risk of switching loyalties.

Republicans most difficult defense is likely Senate District 27, where Sen. Jack Tate, of Centennial, is stepping down. Vying to replace him is Republican Suzanne Staiert, who strategists from both sides say will have her work cut out for her to defeat Democrat Chris Kolker.

Staiert is a former deputy secretary of state who recently litigated the ethics case brought by a conservative nonprofit against former Gov. John Hickenlooper. She’s running in part on her role helping to create Colorado’s mail-in voting system during her time in the secretary of state’s office.

But Staiert said she isn’t getting much help from the Republican Party and instead is leaning on friends to help her win the Arapahoe County district. “I don’t have party activists,” she said.

She’s been outraised by Kolker, and even if she wins, Staiert said she thinks she will likely be legislating from the minority. “I think it’d be tough to take the majority,” she said. “We’d need to pick up two more seats.”

Kolker sought a seat in the state House in 2018, but came up short in his bid to unseat Republican Rep. Susan Beckman. Kolker is a financial planner and former high school teacher.

Each incumbent has outraised his Democratic challenger so far but will need to attract a significant portion of the unaffiliated vote to win.

Rankin will need over 40% of unaffiliated voters to pick for him, according to an analysis by Republican strategist Ben Engen. There’s some disagreement among strategists and legislators about how vulnerable Rankin is, but all political strategists who spoke with The Sun said his race was among the most competitive on the map.

Rankin, who moved from the House to fill the vacant GOP seat earlier this year, is running against Western Slope attorney Karl Hanlon, who lost in the 2018 Democratic primary for Colorado’s 3rd U.S. House district.

In state Senate District 25, Priola will need just under 60% of unaffiliateds to vote for him, according to Engen’s analysis. His Democratic challenger is Paula Dickerson, a longtime teacher.

Priola is a moderate Republican who often serves as a bipartisan vote on more Democratic-led legislation. But Democrats say they’re still hoping to knock him out of office. “When you’re playing for the majority, you’re playing for the majority, and every seat counts,” said Ian Silverii, executive director of the liberal group ProgressNow Colorado.

But in an election year that has been shaken by a racial reckoning, an economic disaster and a pandemic that has killed over 160,000 Americans, a lot could change in the months between now and Election Day.

In interviews with The Sun, multiple senators emphasized the volatility of the race, and said they’re looking for a curveball that could shift the race in their favor.

Sen. Paul Lundeen, R-Monument, a member of the Senate Republican leadership team, said he’s an “eternal optimist” and his party will continue to fight for seats through Nov. 3.

“They say in politics 90 days is a lifetime,” Lundeen said.