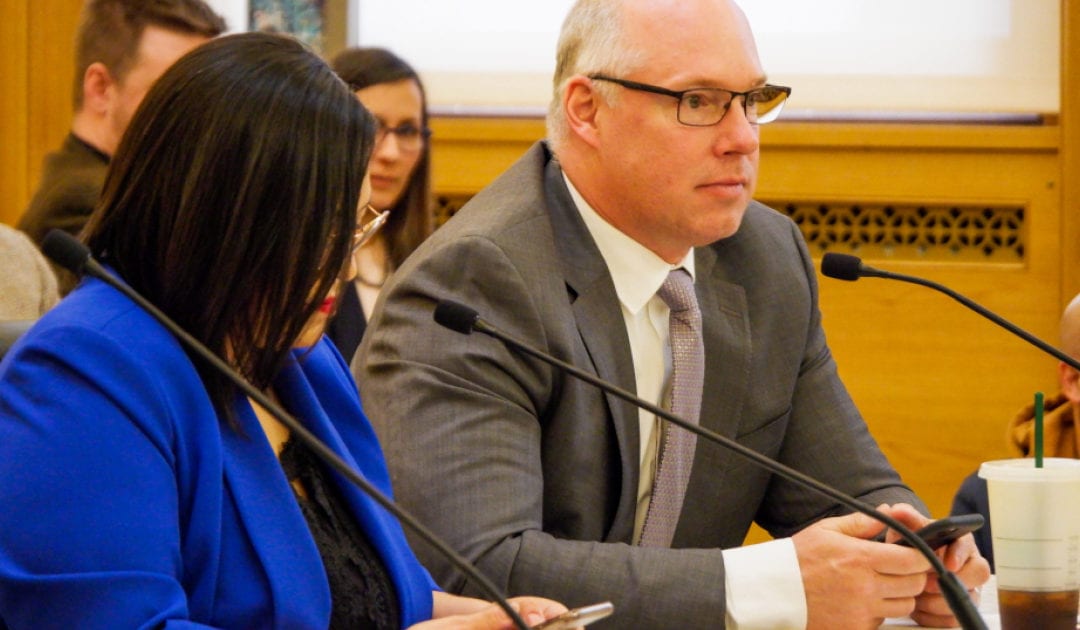 Democrats are outspending Republicans in state legislative races, and super PACs are pouring in $10 million, as the majority party looks poised to make gains in both chambers.

A few of the competitive races are exceeding the $1 million mark with the most expensive contest — a state Senate seat in Adams County — topping $2 million, according to campaign finance reports filed this week.

The political mood that gives Democrats double-digit leads at the top of the ticket in Colorado is trickling down to the statehouse level and the party’s fundraising totals suggests an enthusiasm advantage entering the final stretch of the 2020 election.

House Majority Leader Alec Garnett, a Denver Democrat who is poised to lead the chamber as speaker after the election, said he is looking to make gains in areas of the state that he never thought would be competitive, particularly in Douglas County.

“There’s just no way you can compete in Colorado if women of all stripes, of all different backgrounds — from the independent side to the Republican side — are abandoning the Republican Party,” he said.

Garnett went so far as to liken the situation to a supernova for Republicans: an explosion where afterwards everything goes dark. “I think that’s sort of where we’re at,” he said.

Senate Majority Leader Steve Fenberg, a Boulder Democrat, says he is competing in races that he didn’t think would be up for grabs this year.

“Six months ago our goal was to just keep the majority,” he said. “Now we’re saying the goal is to grow the majority, because we do think we have a shot in some of these Republican districts.”

Meanwhile, the spending levels by Republicans are lagging. The House and Senate committees raised a combined $3.2 million with most of that aimed at the upper chamber.

The Republican troubles are attributable to more than just the national political tide. A rift in the House Republican caucus is raising doubts among donors, and Minority Leader Patrick Neville recently announced he won’t seek another term at the helm.

“We’ve had certain people spreading around rumors about what we’re doing or even just telling folks not to come to our fundraisers,” Neville said in an interview.

The fundraising on statehouse races won’t reach the levels of 2018, when Democrats and Republicans spent nearly $17 million sparring over five state Senate races that decided control of the chamber. Republicans spent slightly more but Democrats won all five contests in a wave year for the party.

Leveraging their majority, Democrats are raising substantial sums from various interests who want to influence policy, and outside organizations are spending big to help keep them in power.

Each year before the legislative session, the Democratic and Republican super PACs hold parties where baskets for campaign donations are front and center. Other fundraisers follow the lawmaking term. These committees may take unlimited donations and spend unlimited amounts as long as they don’t coordinate with candidates.

The top two Democratic super PACs have spent nearly $5 million, compared with $2.5 million by the three top GOP spenders, according to an analysis by The Colorado Sun of reports filed through midday Tuesday.

The money is helping to boost Democratic candidates in battleground districts the party won in 2018, including Reps. Lisa Cutter, Brianna Titone and Tom Sullivan in Denver’s suburbs.

Cutter’s House District 25 in Jefferson County is drawing the most spending on a House contest to date at more than $782,000. She faces Republican Don Rosier, an engineer and former county commissioner. Better Colorado Alliance has spent $445,000 supporting Cutter while Republican education reform group Ready Colorado Action and Better Jobs Coalition has spent nearly $185,000 to support Rosier.

“Growing up in Colorado, when they built Highlands Ranch, when I used to visit Ken Caryl for a childhood sporting event, these were the Republican strongholds in the suburban metro area,” said Garnett, the House Democratic leader. “They have been for a generation. Never did I ever think that we were going to be in a place where we were trying to win seats in Highlands Ranch, in Ken Caryl, in parts of Littleton.”

The one seat where Democrats are playing the most defense is House District 47, a Pueblo seat currently held by Bri Buentello, a first-term lawmaker. Republicans hope to flip it back to their control.

Business groups are supporting Buentello in her contest against Republican Stephanie Luck, where more than $732,000 has been spent thus far. Nearly $443,000 of that cash comes from Better Colorado Alliance, the Democratic super PAC.

Take Back Colorado, the GOP organization, has spent $36,000 opposing Buentello.

Republicans hoped to play offense, now they are trying to defend their limited turf

The impact of the limited fundraising on the Republican campaign side is being minimized by the dark-money funded super PAC Unite for Colorado Action, which is targeting state Senate races.

The most expensive legislative race in the state is Senate District 22, where Republican incumbent Kevin Priola, the most bipartisan member, is seeking reelection against Democratic educator Paula Dickerson, who is facing criticism for her personal financial history that includes two bankruptcies. Presidential candidate Hillary Clinton won the district by 2 points in 2016, so Democrats see potential to pick up a seat.

The outside spending exceeds $2.2 million split about evenly between the parties. Priola’s campaign spent another $49,000 and Dickerson spent $80,000.

Two other Senate races topped the $1 million mark as Republicans look to hold a district on the Western Slope and an open seat on the Front Range.

Retired Carbondale businessman Bob Rankin, appointed to the seat in early 2019, faces Glenwood Springs attorney Karl Hanlon, a Democrat. The spending in the race totals about $1.4 million with $750,000 going to support Rankin in a district Trump won by 5 percentage points in 2016.

Nearly $1.4 million is being spent in Senate District 27 in Centennial. Democrats are the big spenders, with the Leading Colorado Forward super PAC putting in more than $1 million. Most of that is going to oppose Republican Suzanne Staiert, a former deputy secretary of state who faces Democratic financial adviser Chris Kolker. Clinton won the district by 7 points in 2016, and it’s considered a key pickup opportunity for Democrats.

On the House side, Take Back Colorado received $455,000 from Values First Colorado, the super PAC operated by House Republicans, and spent $283,000 on contests in several House districts.

Three of the races targeted by the House campaign committee are considered safe for incumbent Rep. Kim Ransom, a Douglas County Republican, and Democratic Reps. Barbara McLachlan, of Durango, and Tom Sullivan, of Aurora.

“We went into this year thinking we’d be able to go on offense and flip seats, and more and more we are playing defense,” said Joe Neville, a strategist at Take Back Colorado and the brother of outgoing House GOP leader Patrick Neville.

“We can look at the numbers,” he added. “We know this is a tough year with the way the ballot shakes out. There’s a lot that depends on what happens with the top ticket races.”

State Rep. Colin Larson, a Littleton Republican, questioned the House Republicans’ campaign tactics. He said Democrats started advertising in competitive House districts much earlier than the GOP while it spent in safer districts.

“They were advertising in mid-August in many of these competitive races, races that were very much winnable back then,” Larson said. “They started a drumbeat of steady negative mail against all of our candidates starting in August. The first spend that I saw on the caucus side didn’t really hit until the week before ballots dropped.”

Take Back recently spent $6,800 on a mailer supporting Larson, but Democrats have spent more than $200,000 to oppose him or support his opponent, Mary Parker. Larson survived a brutal primary after opposition from some traditional allies of the Neville family.

Larson said he thinks spending in safe districts was a “serious strategic error” that hurt the party’s chances. But Joe Neville said Democratic gains in Douglas County made him nervous so he spent money to shore up the seat.

The House District 38 in Arapahoe County, where he was appointed to the seat in February, is one Democrats expect to flip to their side.

Champion said he’s sending postcards and mailers and putting out yard signs to boost his bid and emphasize his vast experience, including as former Columbine Valley mayor. But the spending gap didn’t go unnoticed.

Republicans groups have yet to report spending any outside cash in the district, while Democrats have spent nearly $130,000 opposing Champion in support of David Ortiz, a disabled veteran.

Champion thinks the spending on the Democratic side is just too much. “I think it’s pretty sad when it’s over one-hundred-plus thousand dollars people are targeting for a House district race. Goodness gracious they must have way more money than I think what is necessary,” he said.

In terms of help from Republicans, Champion said he’s “gotten a little bit.” Take Back Colorado sent one mailer in the race, he said, although the committee has yet to report that spending. Champion said any support from the Colorado Republican Party is not obvious.

Joe Jackson, a spokesman for the state party, said it created a program dedicated to helping statehouse candidates work on messaging and build their own canvassing operations to better coordinate with top-ticket races. But he didn’t respond to questions about the spending deficit compared to Democrats and lack of financial help for down-ticket races.