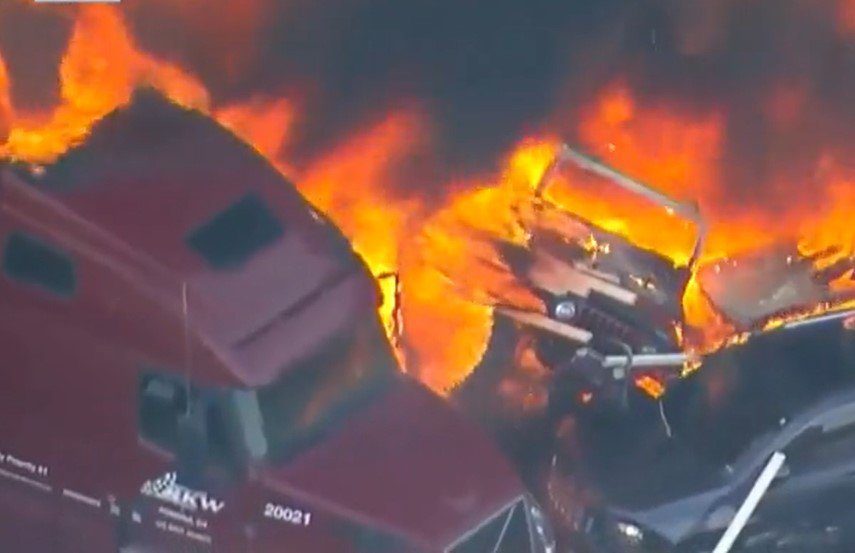 #BREAKING Colorado governor will reduce sentence to 10 years for truck driver Rogel Aguilera-Mederos who is facing 110 years in fatal crashhttps://t.co/ULYz5NBRBd

Polis announced Thursday he would commute the sentence for Rogel Aguilera-Mederos, reducing his sentence from 110 years to 10 years. Under the new sentence, the 26-year-old would be eligible for parole in five years.

“I am writing to inform you that I am granting your application for a commutation. I believe you deserve clemency for several reasons. You were sentenced to 110 years in prison, effectively more than a life sentence, for a tragic but unintentional act.”

Polis announced the news Thursday along with two other commutations, fifteen individual pardons, and an executive order granting 1,351 pardons for those convicted of possessing two ounces or less of marijuana.

“The length of your 110-year sentence is simply not commensurate with your actions, nor with penalties handed down to others for similar crimes.

“There is an urgency to remedy this unjust sentence and restore confidence in the uniformity and fairness of our criminal justice system, and consequently I have chosen to commute your sentence now.”

Aguilera-Mederos was given the 110-year sentence on Dec. 13. The judge who handed down the sentence was bound by the state’s mandatory minimum sentencing rules.

Cuban immigrant Rogel Lazaro Aguilera-Mederos said he was “working for a better future for my family.” Sad, tragic case all the way around. pic.twitter.com/fnUOtnrXPg

“The judge’s sentence of 110 years is unjust and not in line with prior case law, and we are thankful that the Governor agrees with us.

“We are reviewing this commutation of the sentence with Rogel and his family. The potential for Rogel to be reunited with his family rather than spend a lifetime behind bars is exciting for all involved.”

A truck driver who received a 110-year jail sentence for a crash that killed 4 people near Denver will have his sentence revisited by a judge.

Rogel Aguilera-Mederos said his brakes failed during the crash. Some 5 million people signed a petition calling for his clemency. pic.twitter.com/jzZFfYSAor

Prosecutors had asked the judge for a sentence modification to 20-30 years but expressed disappointment with the 10-year sentence. First Judicial District Attorney Alexis King said:

“I joined the surviving victims and families of those who lost their loved ones in their wish to have the trial judge determine an appropriate sentence in this case, as he heard the facts and evidence of the defendant’s destructive conduct that led to death, injury, and devastating destruction.

“We are meeting with the victims and their loved ones this evening to support them in navigating this unprecedented action and to ensure they are treated with fairness, dignity, and respect during this difficult time.

We look forward to sharing more information with our community that we were ethically prohibited from releasing while the case was pending.”

Aguilera-Mederos, a Cuban immigrant, said the crash unfolded in April 2019 when his brakes failed, sending his truck plowing into dozens of cars and causing a 28-car pile-up.

Twenty-eight vehicles, including four semi-trucks, were damaged or destroyed in the wake of the fiery crash on April 25, 2019. Investigators estimated he was going at least 85 miles an hour just before the crash as he was driving a semi-truck carrying lumber on eastbound I-70.

Truck drivers, celebrities, and the general public expressed shock and outrage over the original sentence, with about five million people signing an online petition seeking his clemency.

“This case is so egregious. It boggles the mind that here we are in 2021 and that somebody who was not intoxicated, not on drugs… It’s an accident, the brakes went out. But here’s the Latino driver, he gets charged, convicted and given 110 years of prison on his first offense.”

DENVER, CO- The obsession with trying to soft-pedal criminal offenses is getting beyond absurd. In some cities, they have stopped using the term “criminal” and instead use the much less offensive to bad guys term “justice involved persons.”

Now in Colorado, sex offenders are no longer allowed to be called exactly what they are…sex offenders, according to CBS 4 in Denver.

According to the board that sets “standards”…for what we have no idea, they have decided to change the term “sex offender” to reflect what they call “person-first” language.

The board, otherwise known as the Sex Offender Management Board, is comprised of people from public defenders to prosecutors sets standards and guidelines for treatment providers and alleges the new terminology will only be used in that specific context. While the term sex offender as defined in the law or criminal justice system will not change…for now…some worry that the change is a step in that direction.

One such person is Kimberly Corbin, a rape survivor who spoke out against changing the term “sex offender” to something “less stigmatizing.”

“I’m involved today after hearing that it would be improper or offensive in some manner for me to refer to the man who raped me, as a sex offender,” she said.

She said that labels based on traits people are unable to control is one thing, however, believes sex offenders are different.

“It’s very, very damaging for those people who are labeled when it has to do with gender, race, sexuality, ability, but those are not their choices; the biggest thing for me is these are choices that sex offenders make.”

One such sex offender, a man named Derek Logue told the outlet he didn’t feel he should carry the label for life.

“Referring to me by a label for something I did half my life ago is inappropriate and downright offensive,” he said.

Well, we certainly wouldn’t want to “offend” a sex offender, would we?

Logue claimed the word “client” is a more appropriate title…you know, like a customer of an accountant or something. Much less offensive than sex offender.

Kathy Heffron, a public defender agrees, “It takes into consideration the uniqueness of individuals who are receiving treatment.”

The term “client” was apparently one of five options being considered by the board.

Without a basis for believing so other than virtue signaling for sexual deviates, supporters of the plan claim it will reduce recidivism, while opponents of the idea believe it will reduce accountability, making the obvious point that both victims and survivors have to live with those labels for life.

After discussion, the board voted 10-6 to change the term to “adults who commit sexual offenses.” People literally waste their time thinking stuff like this up. Your tax dollars hard at work.

“I think this strikes a balance that honors the impact to victims and recognizes the current and ongoing impacts of sexual assault, but also avoids the labeling term that has negative impacts on those who commit sex offenses.”

Oh, we see. We need to make sure we don’t hurt the feelings of rapists.

However Jessica Dotter, who works with the Colorado District Attorneys’ Council believes changes won’t end with the Sex Offender Management Board.

“I’m concerned that the use of person-first language generally is an intent to remove accountability from offenders and to diminish the experience of the victims,” Dotter said.

Last year Colorado lawmakers, who clearly have too much time on their hands, proposed a bill which would have eliminated the term “sexually violent predator,” from the vernacular, along with some other changes, however they ended up pulling it from consideration.

At the same time, a task force currently investigating sentencing reform is looking to have the legislature change terms such as defendant, convict, and felon to the aforementioned “justice-involved people.”

While the Sex Offender Management Board changed the name to which sex offenders are known as, the board will still be known by the same name. Why you might ask? Because only the state legislature can change the name of the board.