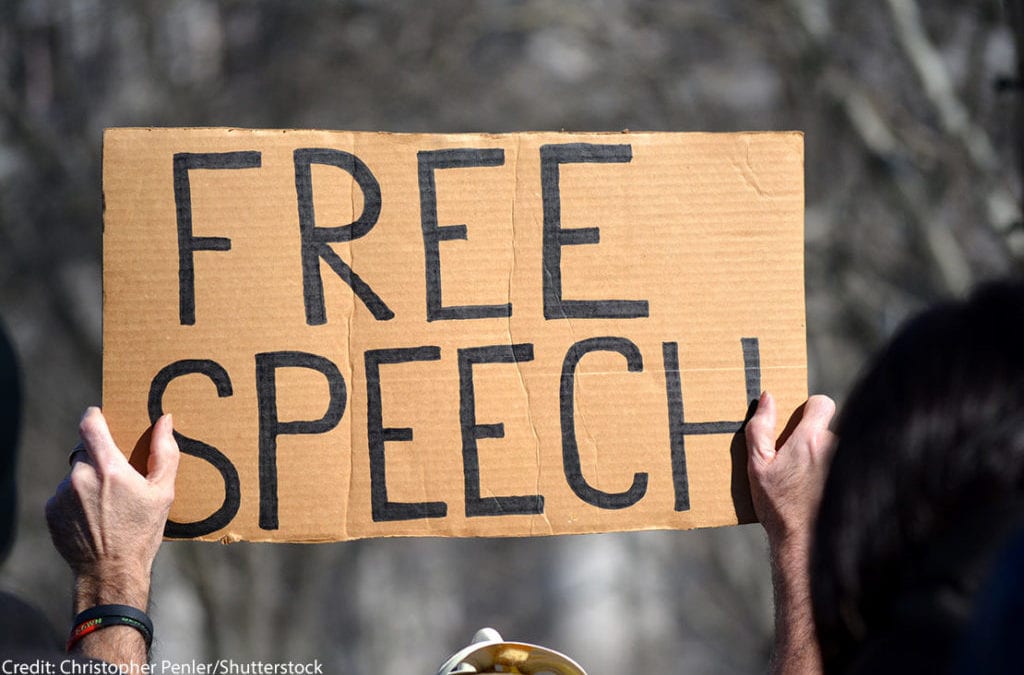 The record demonstrates the ACLU’s unwavering commitment to First Amendment rights for all.

Has the ACLU lost its way? This appears to be a perennial question. In 1994, then-ACLU President Nadine Strossen wrote a 17-page article with 54 footnotes, responding to the charge that the organization “is abandoning its traditional commitment to free speech and other classic civil liberties and is becoming a ‘trendy’ liberal organization primarily concerned with equality and civil rights.” Sixteen years before that, in 1978, J. Anthony Lukas wrote a feature for The New York Times Magazine titled “The ACLU Against Itself,” recounting the controversy over whether the group should have represented a group of Nazis who sought to march in Skokie, Illinois. The question is not new.

But the answer remains the same. The ACLU is committed to the principle of free speech today, just as it was in the 1990s, 1970s, and long before that. And we are specifically committed to the proposition that the First Amendment’s guarantees (like those of the rest of the Constitution) apply to all, not just to those with whom we agree. At the same time, the ACLU also remains devoted to defending other fundamental civil rights and civil liberties, including equal protection of the law — as we always have been. Addressing the tensions that sometimes arise between these commitments is not easy. But we seek to do so, today as always, not by abandoning any of our core commitments, but by acknowledging and confronting the conflicts in as forthright, inclusive, and principled a way as we can.

Some have charged that in doing so we have abandoned our fidelity to the First Amendment in the years since our representation of a white supremacist protester in Charlottesville. In that case, we challenged the revocation of his permit to protest the removal of a monument to Confederate General Robert E. Lee. The protest turned violent, the police failed to intervene, and ultimately one of the alt-right adherents, Alex Field, rammed his car into a group of counter-demonstrators, killing one person and injuring 19 others. The Charlottesville tragedy and the ACLU’s role in defending the protesters’ permit led to considerable controversy, inside and outside the ACLU.

In its wake, I led a committee representing a wide range of divergent views within the ACLU in developing guidelines for selecting cases where they present conflicts between values that the ACLU defends. We reaffirmed in that document that “As human rights, these rights extend to all, even to the most repugnant speakers — including white supremacists — and pursuant to ACLU policy, we will continue our longstanding practice of representing such groups in appropriate circumstances to prevent unlawful government censorship of speech.”

At the same time, we acknowledged the costs that can come with that representation, including to other interests and work of the organization, and outlined ways to address and mitigate the costs when we do decide to embark on that representation. That can mean making clear in public statements that we abhor the speakers’ views even as we defend their right to express them, supporting counter-protesters, and investing any attorneys’ fees we obtain in connection with the work to advance the views that the speaker opposed and that we support. Some saw even this document’s acknowledgment of the complexity of such work as an abandonment of principle, but we saw it as an honest effort to confront the challenge of being a multi-issue organization.

Some of our critics argue that by considering the content and impact of the speech in assessing how to proceed, we are walking away from a commitment to all free speech. That’s an ahistorical and overly simplistic analysis of our free speech work: One must consider the content of the speech and the nature of any regulations to assess whether a First Amendment claim is likely to prevail. Thus, we considered the content of speech in choosing to defend the Nazis in Skokie in the 1979; in representing NAMBLA when it was sued in 2000 for allegedly inciting a murder; in filing a brief in the Supreme Court supporting the Westboro Baptist Church’s anti-gay protests in 2010; and in filing another Supreme Court brief in 2014 supporting the First Amendment rights of a man charged with threatening his ex-wife on the internet. The guidelines we adopted did not change our policy, and in fact reaffirmed it. Instead, they merely codified our best practices, and sought to provide guidance and a process for assessing future cases that involved conflicting ACLU commitments.

One thing we rejected was any abandonment defending those with whom we disagree. Yet a small number of disgruntled voices continue to charge that we have done just that. But the record demonstrates otherwise. Since 2017, we have supported the constitutional rights of the NRA, the Koch-funded Americans for Prosperity Foundation, anti-Semitic protesters, Trump supporters, Trump himself, Republican challengers to a Democratic gerrymander, right-wing provocateur Milo Yiannopoulos, and conservative and anti-gay student groups, to name but a few. We have filed multiple Supreme Court briefs with the Cato Institute, the American Conservative Union, and the Institute for Justice. Here is just a sample of the work we have done since 2017 in which we have defended or stood alongside conservative voices and groups, because we believe constitutional principle demanded it, even if we disagreed with what the groups and individuals had to say.

Over the same period, the ACLU also represented many liberal and progressive groups and individuals in First Amendment and other cases, including: Deray McKesson, a Black Lives Matter activist sued for injuries caused by someone else in a protest that McKesson allegedly led; protesters tear gassed outside the White House to clear the way for a President Trump photo opportunity during last summer’s protests provoked by the killing of George Floyd; and supporters of a boycott on Israel. We also represented individuals who engaged in speech that was not political at all, including a pending Supreme Court case involving a high school freshman suspended from the high school cheerleading team for saying “fuck school fuck softball fuck cheer fuck everything ” on her personal Snapchat on the weekend.

In our view, the First Amendment protects everyone, whether you are on the left, the right, or somewhere in between. For a century, the ACLU has not only defended that right on behalf of others, but has exercised the right in all that we do. It’s the First Amendment that protects our organization’s rights to speak out, to organize, to demonstrate, and to petition for a redress of grievances. It’s the lifeblood of democracy, and the oxygen of a civil society. And most important, the First Amendment is what ensures that those without political power can work to demand justice. At the end of the day, that’s why we believe the First Amendment has to protect everyone — and why we remain committed to defending even the rights of those with whom we disagree.