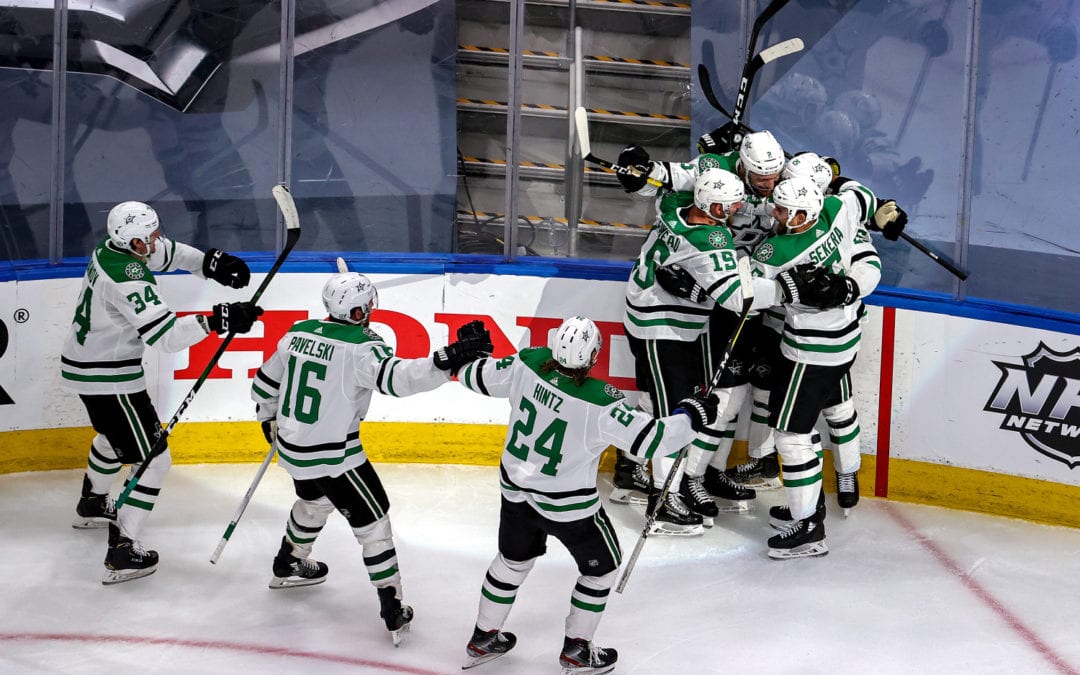 EDMONTON, Alberta (CBSDFW.COM/AP) – With a little more than 12 minutes to go in the first overtime, the Stars’ Joel Kiviranta scored a goal and Dallas won the seven-game series in sudden death overtime to advance to the Western Conference Finals for the first time since 2008.

Joel Kiviranta #25 of the Dallas Stars is congratulated by his teammates after scoring the game-winning goal against the Colorado Avalanche during the first overtime period to win Game Seven of the Western Conference Second Round during the 2020 NHL Stanley Cup Playoffs at Rogers Place on September 04, 2020 in Edmonton, Alberta, Canada. (Photo by Bruce Bennett/Getty Images)

The Stars led the series 3-1 before the Avalanche battled back and won the next two games.

Kiviranta scored on a quick shot after a pass from Andrej Sekera from behind the net. Kiviranta was playing only his third postseason game, on the ice for the series finale with Andrew Cogliano unfit to play, after scoring once in 11 regular-season games.

“Pretty unreal. This is what you dream about when you’re a young kid,” Kiviranta said. “I played the first Game 7 of my life. I didn’t know what to expect. … Maybe their D just lost me a little bit. They didn’t know who was picking me up. I tried to find a soft spot. It was a great pass.”

Dallas will open the conference finals Sunday night against Vancouver or Vegas, who played a Game 7 of their own Friday night at Rogers Place There had never been an NHL Game 7 played at a neutral site before the two games.

The Avalanche were trying to get to their first Western Conference finals since 2002, and forced Game 7 after being down 3-1. Third-string goalie Michael Hutchinson, a 30-year-old journeyman who had never started a playoff game before winning consecutive elimination games, couldn’t make one more save. He had 31 saves in the final game.

Dallas won the previous two Game 7s it played against Colorado, beating the Avalanche in the Western Conference finals in 1999 and 2000 to make it to the Stanley Cup final. The Stars won their only title in 1999.

Alexander Radulov scored two goals for Dallas, tying it at 3 with 8:32 left with assists from John Klingberg and Jamie Benn. That was only a couple of minutes after Radulov came out of the penalty box for an interference penalty.

But in a series when the two teams combined for 57 goals, and were tied four times in the finale, they scored 10 seconds apart late in regulation.

Nazeem Kadri had a goal and an assist for the Avalanche, who played without captain Gabriel Landeskog (unfit to play) and didn’t get a point from scoring wizard Nathan MacKinnon for the first time in 15 games this postseason.

The Avs led 3-2 with 14:15 left in the second period when Stars goalie Anton Khudobin couldn’t control get control of a puck, and Kadri scored on a backhander from the left side of the net. That was Kadri’s sixth power play goal, matching Joe Sakic (1996) for the second-most in an Avalanche postseason behind Michel Goulet’s seven in 1985.

And Kadri twice came oh-so-close to scoring again in that period. He had one shot ricochet off the post and Khudobin was falling back when he extended his left arm for a glove save on another Kadri shot that looked like it was head into the net.

Dallas had an extra skater on the ice during a delayed penalty early in the second period when tying the game at 2-2. Rookie Denis Gurianov took a shot toward traffic, and it went off Kiviranta’s blade and past Hutchinson.

Andre Burakovsky, who won a Stanley Cup title with Washington in 2018 but was traded by the Capitols after last season, converted a turnover by Dallas defender Jamie Olesksiak into an unassisted goal and a 2-1 lead midway lead through the first period. Burakovsky got his fourth goal in six career Game 7s.

The Stars scored only 2 1/2 minutes into the game when Radulov jammed in a loose puck soon after Hutchinson was unable to clear it out of the zone from behind the net. But their lead lasted only 69 seconds, with Colorado getting even on Ian Cole took a shot into traffic that went off the stick of teammate Namestnikov for a 1-1 tie.

NOTES: It was the 45th time in NHL history that a Game 7 went to overtime. … Neither team had a Game 7 overtime victory in its current home. The last for each franchise was the Minnesota North Stars in 1984, a year before the Quebec Nordiques had one.