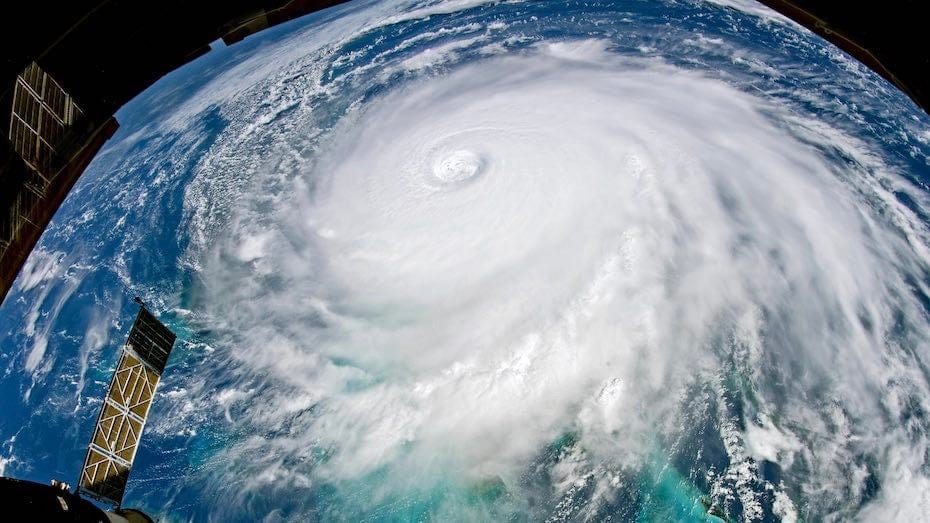 Above: A photo from the International Space Station of Category 5 Hurricane Dorian on September 2, 2019, during its devastating stall over the northwestern Bahamas. ()

This is only the fifth time in the 26-year history of CSU’s April forecasts that the team has called for at least 16 named storms. Of those four other years, all but one ended up producing at least 14 named storms.

Unusually warm sea surface temperatures (SSTs) during the first quarter of this year, in two distinct parts of the globe, are among the main factors that pushed CSU’s forecast toward the high side.

—Warm SSTs across the eastern Atlantic, from the tropics to latitude 50°N, are associated with weaker trade winds, lower surface pressures, and warmer SSTs over the tropical Atlantic during the subsequent hurricane season.

—Warm SSTs in the Coral Sea, northeast of Australia, tend to inhibit the development of El Niño, which typically acts to suppress hurricane development in the Atlantic.

Seasonal forecast models—especially those from NASA, NOAA, and the Australian Bureau of Meteorology—have leaned increasingly toward the development of a La Niña event later this year. The long-range outlook from the European Centre for Medium-Range Weather Forecasts (ECMWF) is calling for neutral conditions.

A cautionary note: “The early April forecast is the earliest seasonal forecast issued by Colorado State University and has modest long-term skill when evaluated in hindcast mode,” notes the outlook, which is produced by CSU’s Phil Klotzbach, Michael Bell, and Jhordanne Jones.

For this year’s April outlook, the CSU team debuted a more sophisticated (and more complex!) version of its forecast strategy. The CSU outlooks originated as a statistical product, correlating observed features with characteristics of the hurricane season to come. Last year the team added a statistical-dynamical component, based on output from the ECMWF’s SEAS5 seasonal modeling system and developed with the Barcelona Supercomputing Centre. Like other statistical-dynamical models, SEAS5 incorporates the state of the oceans and sea ice to produce longer-range outlooks than would be possible using the atmosphere alone.

This year CSU has added a second statistical-dynamical scheme, this one based on the UK Met Office’s GloSea5 seasonal prediction system. When evaluated in hindcast mode (predicting past events as if they were occurring in real time), the SEAS5 and GloSea5 models show measurable skill as soon as March in predicting surface winds for July over the Main Development Region of the Atlantic (see graphic below). In turn, July wind shear is a useful index to the amount of tropical cyclone activity one might expect in the Atlantic over the following months.

This year’s 2020 outlook from CSU is based on five sources of input:

—the two statistical-dynamical schemes above

—a new incarnation of the statistical scheme, based on data from 1982 to 2019

—the analog method, which looks for years that had conditions similar to those observed in February-March and those being projected for August-October

The best analog years for 2020, as identified by CSU, are:

Notably, the statistical-dynamical input from SEAS5 correctly called for a busier-than-average season in 2019—whereas the statistical and analog guidance was much more bearish, helping to pull pulling CSU’s April outlook toward a quieter-than-average season. This year’s SEAS5 guidance is even more bullish than last year’s, with a projected ACE of 180.

“There is a maze of changing physical linkages between the many variables. These linkages can undergo unknown changes from weekly to decadal time scales,” notes the forecast team. “It is impossible to understand how all of these processes interact with each other. No one can completely understand the full complexity of the atmosphere-ocean system. But, it is still possible to develop a reliable statistical forecast scheme which incorporates a number of the climate system’s non-linear interactions.”

CSU is also calling for higher-than-normal probabilities of hurricane landfall along the U.S. Gulf and Atlantic coasts, with each coast having close to a 45% chance of landfall compared to the usual odds of around 30%. However, as CSU stresses in its outlook, just one landfalling hurricane can lead to disaster even in an otherwise “quiet” season. See the report by weather.com’s Jonathan Belles and Brian Donegan for more perspective on the latest CSU outlook.

WU co-founder and Cat 6 founder Dr. Jeff Masters had this to say about today’s release:

“I think the April 2020 CSU forecast has an above-average chance of success, given strong model agreement and very warm Atlantic SSTs currently in place. However, April forecasts of hurricane season activity have had little or no skill in the past, primarily since they must deal with the so-called ‘spring predictability barrier’. April is the time of year when the El Niño/La Niña phenomenon commonly undergoes a rapid change from one state to another, making it difficult to predict whether we will have El Niño, La Niña, or neutral conditions in place for the coming hurricane season.

“The next CSU forecast, due on June 4, is worth paying more attention to. Their late May/early June forecasts have shown considerable skill over the years.”