‘Craziest I Have Ever Seen It’: Gun Sales Surge Amid Coronavirus Fears – Washington Free Beacon 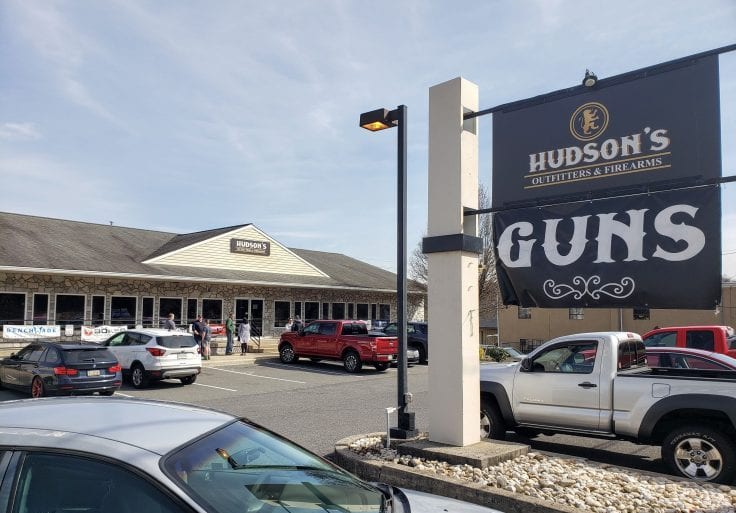 The coronavirus pandemic has put a strain on the gun and ammunition industry, as well as the FBI’s background check system, due to surging demand.

So many Americans are flocking to local gun stores to stock up on firearms and ammunition in the face of the novel coronavirus that dealers say they are scrambling to keep up with demand. The surge is also causing delays in FBI background checks, forcing gun owners and first-time buyers alike to wait for their purchases to be approved. In the worst affected areas, the normally instantaneous checks could begin to take weeks.

“This is the craziest I have ever seen it. We sold out of all FMJ in the main calibers … and are only left with some high-end self-defense ammo,” Scott Blick, a managing partner at Ammunition Depot, told the Washington Free Beacon. “We have ammo coming in by the truckload to restock, but it will be a long time before we are back to normal inventory.”

The FBI said it only publicly releases data on the National Instant Criminal Background Check System (NICS) monthly but the National Shooting Sports Foundation (NSSF), the firearms industry’s trade group, said the number of gun checks tripled at one point.

“We did have a conversation with the FBI yesterday. And they told us on Monday, March 16, 2020, NICS checks were 300 percent higher than they were March 16, 2019,” Mark Oliva, a spokesman for the NSSF, told the Free Beacon. “Since February 23 through present, on average, every day has been at least double what it was last year. There certainly has been a run on people buying firearms and people buying ammunition.”

At local gun shops visited by the Free Beacon in Pennsylvania and Virginia, the increased demand was evident, as well as precautions against spreading the virus among customers and staff. At Hudson’s Outfitters & Firearms in Pottstown, Pa., on Wednesday, the staff limited ammunition purchases to those who also purchased a firearm from their dwindling in-store stock. The store also restricted the number of people allowed inside the store at a single time to 10 customers. Customers stood in line outside the store about six feet apart.

“It’s been like this for a couple of days,” Spencer, a salesman at Hudson’s, said.

The sudden surge in gun and ammo sales are similar to ones America has experienced in the wake of terror attacks. Police in major cities, including Philadelphia and New York, have already publicly announced they will temporarily forgo some arrests due to the pandemic. A 21-year-old, who did not wish to be named, told the Free Beacon he currently lives in Philadelphia for school and cited the city’s announcement as the reason he wanted to purchase a handgun for the first time.

“I’m kind of worried. I want to be able to protect myself,” the man said.

The rush was just as evident at Sharpshooters in Lorton, Va., on Thursday. The store hung a sign on the door informing customers of the increased cleaning regimen it has instituted, and many employees wore gloves. The stock of guns was mostly depleted but the store was still selling some common ammunition, including 9mm and 5.56 NATO with a two-box limit.

Sales of some items had surged as much as nine-fold, retailers said. Anthony Welch, a spokesman for ammunition seller Lucky Gunner, said sales of .223 and 5.56—rounds used in the AR-15 and other semiautomatic rifles—are up 900 percent, while 9mm ammunition increased by 500 percent.

“We’ve definitely been busy,” Welch said. “We’ve added customer service team members, and our crew is working overtime to try to keep up. So far, our guys at the warehouse are doing great. It seems there’s little doubt this is as a result of the coronavirus and everything that could come with it.”

He added that shotgun rounds have also surged “a disproportionate amount.”

“It’s usually a decent seller but this week, it’s really taken off. I suppose that makes sense because of its reputation as a great round for home defense,” Welch said.

The dealers said they experienced spikes in response to specific pieces of news surrounding the virus. Welch said sales at Lucky Gunner started to pick up in February after news of the virus taking hold in Italy emerged.

“Things were about twice as busy the first week of March as they were the first week of the month in 2019,” he said. “When President Trump gave his Oval Office address [on March 11] it was like someone turned things up to 11. We saw things really start to get wild. In terms of sales, we then started running anywhere from 8 to 10 times where we were in 2019.”

Blick of Ammunition Depot said March 12, the day most sports leagues either canceled or suspended their upcoming games, was the beginning of a run of all-time record sales days. Pallets of ammunition were sold out minutes after they were released.

“While demand has been elevated all year, we saw a large ramp in ordering starting last Thursday [March 12] and set single-day sales records for three days in a row,” Blick said. “We are currently running double shifts in the warehouse to try to keep up with demand, but orders are still coming in at an unprecedented rate.”

The FBI said it is still operating NICS with a full staff but asked for understanding as it tries to handle the demand while taking precautions against the virus.

“The FBI is taking appropriate measures to ensure the safety of their employees while remaining committed to ensuring national security and pursuing violations of federal law,” Holly Morris, an FBI public affairs specialist, told the Free Beacon. “At this time, the FBI’s National Instant Criminal Background Check System Section remains fully operational and will continue to process requests. The NICS Section appreciates the public’s patience during this period of national emergency.”

Still, Oliva said NICS is experiencing delays on normal gun sales across the country—even some extreme ones.

“Those one-minute answers now may take a few minutes,” he said. “And those other places, where before maybe they took a few minutes, may take a couple hours now just because demand is so high.”

He said checks processed by the FBI have been less affected than those conducted by state-level agencies.

“Where we’re starting to see issues on are states that are ‘point of contact’ states that do their own background checks,” Oliva said. “Colorado is up to two days now. Washington state, they’re looking at waits up to three weeks.”

“Those business days only count if the state offices are open,” he said. “So, we’re trying to remind all those retailers to be mindful of that 72 hours. We want to make sure our retailers are completely aware of the effects of this on the law.”

In the face of unprecedented demand and slowed background checks, manufacturers are already ramping up production, and retailers expect shelves to be restocked in the coming days and months. Oliva said the companies underpinning the industry are healthy and the supply chain remains strong.

“For the short term you may see a few hiccups, but I think, over time, like your hand sanitizer folks, your toilet paper manufacturers, they’re all going to be adjusting to the new normal and will be able to fill some of the holes that are out there,” Oliva said. “So, I think that you’re going to see the same thing with firearms and ammunition.”

Spencer from Hudson’s said the store expects to restock “in the next day or two.” Welch said Lucky Gunner is getting new shipments on a daily basis and even though the supply chain is “getting picked over pretty well,” manufacturers are continuing to run production lines, which means more product is on the way. Blick said Ammunition Depot is restocking at an unprecedented rate and has already secured new manufacturing capacity for the next year.

“Currently, we are able to resupply and have quite literally tens of thousands of tons of ammunition on the road on its way to our warehouse,” he said. “Additionally, we have secured manufacturing capacity for hundreds of millions of rounds over the next year.”

Blick warned that the increased demand will likely drive up prices as more Americans than ever seek a way to provide for their own personal safety in a time of crisis.

“We expect to be feeling the shocks of this elevated buying for several months if not longer,” he said. “Wholesale prices have already increased significantly, an indicator that manufacturers and distributors do not have enough stock or manufacturing capacity to keep pace with consumer demand.”