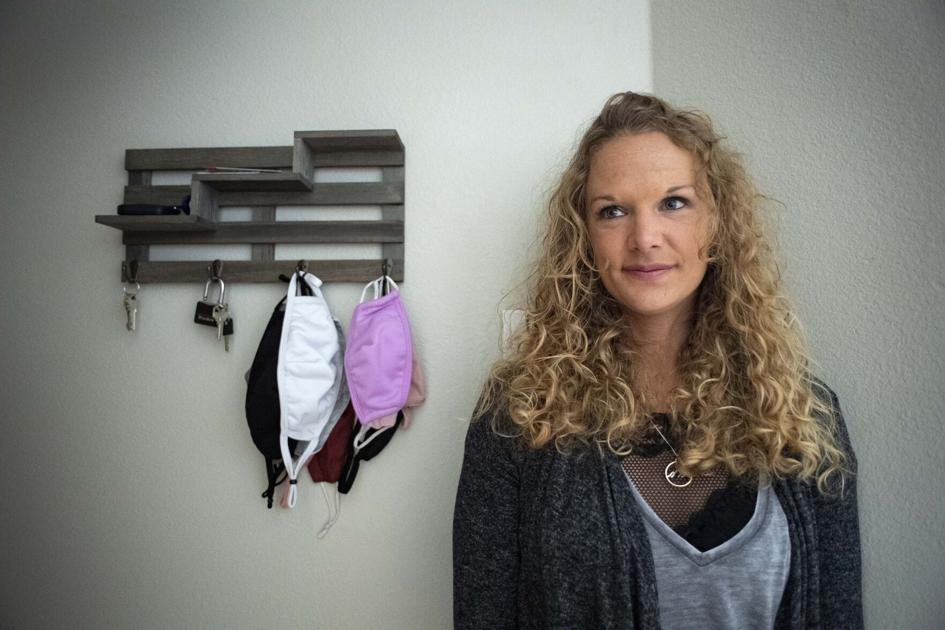 Sarah Linster hiked trails near Woodland Park, managing each with relative ease. She had a fulfilling job. She was an A student in graduate school.

Now she’s unemployed, gets Cs and can barely make it up the stairs in her house — her body held hostage by a lingering disease that’s a mystery to scientists the world over.

“It’s hard to be patient, and it’s frustrating,” Linster said. “And there’s a little fear, too, that maybe it won’t come back — maybe this is the new normal.”

A year after the first COVID-19 patients were rushed to intensive care units across Colorado, many survivors continue to suffer from fatigue, difficulty breathing and debilitating “brain fog.” For these so-called “long-haulers,” the past year has become a weary, painful slog, one that’s left some people unable to work and others unsure when they’ll ever recover.

Even though it’s mid-March, Sarah Linster asked her family to keep up their Christmas tree so she could have something “happy to look at”. Linster is a long-hauler with COVID-19 and has been struggling with the symptoms for the last four months. Sunday, March 14, 2021. (Photo by Jerilee Bennett, The Gazette)

For Linster, who tested positive for the coronavirus in November, nearly every day is consumed with overwhelming fatigue, bouts of coughing and difficulty concentrating.

She has counted more than 20 ongoing symptoms since her initial infection, highlighted by unbearable fatigue, dizziness, intestinal issues and headaches that have become “like my daily companion.” As a result, she quit her job in customer service at an online couponing service.

“My limbs feel really heavy,” said Linster, 44, of Colorado Springs. “I have a set of stairs in my house to go up to the bedroom, and there are days when I have to basically drag myself up using the bannister. Like, I don’t even feel I can lift my body weight.”

There is no official diagnosis for people with lingering symptoms of COVID-19, and until recently, there was no agreed-upon term for describing those symptoms. Dr. Anthony Fauci, the nation’s top infectious disease expert with the National Institutes of Health, recently coined the term “post-acute sequelae of COVID-19,” or PASC, to describe ongoing symptoms from COVID-19 infections. Informally, it has been referred to as “long-haul COVID,” or “long COVID.”

Doctors also don’t yet understand exactly why COVID-19 causes some people to have such long-lasting symptoms.

“That’s the million-dollar question,” said Dr. Aruna Subramanian, clinical professor of medicine in the division of infectious disease at Stanford School of Medicine.

Other viruses have long been known to cause other health issues months or even years after an initial infection. Chicken pox can lead to shingles later in life, for example, and the human papillomavirus can cause cancer.

Some researchers are beginning to examine whether some long-suffering COVID-19 patients are suffering from a chronic autoimmune neurological condition that affects the body’s blood flow. Called postural orthostatic tachycardia syndrome, or POTS, it has been known to cause extreme fatigue, dizziness and difficulty concentrating, and up to half of such cases follow viral infections, such as influenza, said Dr. Tae Chung, an assistant professor at Johns Hopkins University. Still, no clear answers exist.

Count Jenna Bruce among those doctors suspect to be suffering from that autoimmune disorder.

Jenna Bruce, 32, hugs her daughter, Jade, 3, while her husband, Jordan Bruce sit on the couch with them Friday, March 12, 2021, at the Colorado Springs home. Jenna became sick with COVID-19 in March 2020 and still is suffering from the effects of the virus. Jordan was sick for a couple days, but never bedridden. The couple worried about who would take care of their daughter if they were both as sick as Jenna. (The Gazette, Christian Murdock)

Before the pandemic, Bruce, 32, could race up the Manitou Incline in about 28 minutes. She climbed 14,000-foot peaks. She worked as a group fitness instructor.

But after becoming ill with what she suspects was the coronavirus in March 2020, all of that stopped. Her symptoms are legion: a burning feeling along her spine and brain stem, tightness in her chest, unusually low blood pressure, double vision, “brain fog,” full-body tremors, tingling sensations in her hands, phantom feelings on her face, a months-long sore throat and coughing.

They forced her to quit working. And she’s spent at least $10,000 on treatments that have, at best, offered relief lasting only a few weeks.

“Now I’m in this cycle of not knowing what symptom I’m going to have each morning,” Bruce said. “It’s horrible. It’s scary. It’s frustrating.

“The unknown is really scary: Am I ever going to get through this? What’s actually happening in my body? Did I do this to myself by exercising too much? Or am I better off because I’ve been exercising? No one can really give me any answers.”

She is among many people who fell ill during the opening days of the pandemic and have yet to recover a year later.

After recovering from the flu in early March 2020, she fell ill once more after having spent five hours tending to a coughing, hacking COVID-19 patient whose family had recently returned from Italy, one of the first countries to be ravaged by the virus.

She never tested positive for the virus while sick, which she blames on the dearth of available testing early last year. And while her subsequent antibody test was negative, her husband, who also became mildly ill last March, did test positive for antibodies of the virus.

Similar symptoms hit Ravi Turman, 52. She was among the first people discharged from an intensive care unit in Colorado last April. But she never fully recovered — instead falling victim to extreme fatigue and “brain fog” that has limited her ability to work.

“I don’t really feel like I’m past it,” Turman said. “I view life with a little trepidation now, because I’ve been vulnerable, and I’m like ‘I wonder what’s next on the horizon.'”

The lingering symptoms appear to affect both people with severe coronavirus infections, and those with mild cases.

A study of people discharged from March through September last year from UCHealth Memorial Hospital’s Central and North locations found that about one-third of respondents still had symptoms up to six weeks later, according to Dr. Robert Lam, an assistant professor at the University of Colorado School of Medicine who helped lead the study.

“It’s really a time to really stay vigilant,” Lam said. “Because we know that — as we continue to still have high numbers of patients who are infected with COVID 19 — a portion of them will probably still have this long-haul journey.”

Other studies found people with mild cases also struggled with ongoing symptoms. University of Washington researchers found one-third of people who had COVID-19 still had symptoms up to nine months after being infected. And the Stanford School of Medicine found two-thirds of respondents in its study continued struggling with at least one symptom three to four months after their initial infection, though researchers said people with persistent symptoms may have been more willing to participate in the study.

The results highlight the perils of allowing the virus to run rampant without protections, as some have advocated doing over the last year, said Subramanian, the Stanford researcher who led the study.

“I don’t know that they understand really the long-term effects and how much of a burden this is going to be for the economy and the country,” Subramanian said.

No set treatment exists for people with lingering COVID symptoms, and many “long-haulers” say doctors are reluctant to believe their symptoms are tied to the virus.

Physical therapy appears to hold some promise, said Dr. Janna Friedly, a professor at the University of Washington School of Medicine and co-director of its post-COVID rehabilitation and recovery clinic.

Patients in her clinic typically suffer from anxiety and depression, as well as fatigue, trouble sleeping, shortness of breath and tachycardia, or a racing heartbeat.

Her team takes a holistic approach — focusing on improving patients’ sleeping habits while prescribing gentle exercises, such as yoga, stretching and core strengthening exercises. That, along with medications for fatigue, anxiety and depression, appear to show promising results, Friedly said.

“I’d say there’s a great deal of hope,” Friedly said. “And it often times takes some trial and error, and from my experience, it usually takes multiple strategies to help people.”

Any relief would be welcome for Bruce.

She plans to start working again at Children’s Hospital Colorado in April as a health coach. But as she reaches a year of suffering from an illness with few answers, she is at a loss for what to do next.

“I know I’m going to get better, because I’m a fighter and I’m going to fight this until I get an answer,” Bruce said. “This just can’t be my life.”