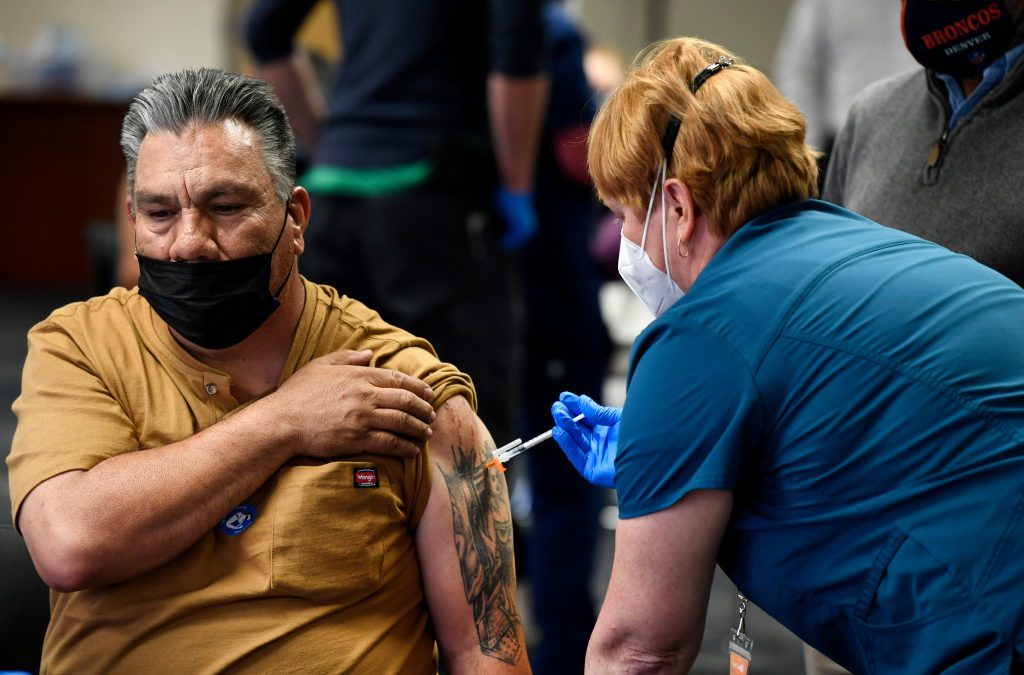 In December, when the first COVID-19 vaccines were administered in the arms of Fort Collins hospital workers, Gov. Jared Polis acknowledged the hopeful moment by declaring it to be “the beginning of the end of the pandemic.”

Five months later, and with more than 2 million people fully immunized, Colorado is still inching toward that long-awaited finale. But it may not come as swiftly or as defined as hoped, according to local medical and public health experts.

It’s likely the coronavirus that causes the disease COVID-19 will linger for the foreseeable future rather than be snuffed out entirely — even if the state is able to hit the “herd immunity” threshold needed to protect residents from another severe wave of infections.

And that threshold is also increasingly looking out of reach as the pace of vaccinations slows and the virus continues to rapidly change and produce new variants, the experts said.

“It is going to be challenging to reach herd immunity,” said Dr. Rachel Herlihy, state epidemiologist. “I actually believe Colorado has a better shot than many states right now.”

Colorado’s COVID-19 modeling team estimates that between 67% and 80% of the community will need to be inoculated against the coronavirus to reach herd immunity. State public health officials, however, acknowledged the threshold is a moving target that depends on multiple factors, including future variants, vaccination rates, receiving federal authorization to inoculate children, and potential waning of immunity from either infections or immunizations.

So far, about 45% of Coloradans are believed to be immune to the virus either through vaccinations or prior infections, Herlihy said.

“At this point, if we are looking at herd immunity, we are not winning that race with the vaccination rates that we have,” said Dr. Oswaldo Grenardo, co-chair of the Colorado Vaccine Equity Taskforce.

This view that Colorado won’t reach herd immunity is in line with national officials who told The New York Times last week that they believe the coronavirus will become a “manageable threat” in the U.S., meaning it will stick around but cause fewer hospitalizations and deaths.

Becca Arndt, left, and Christy Deem, right, administer a COVID-19 vaccine to Cecil Hadden of Red Mesa, Colorado, during a drive-up vaccination POD, or point of dispersing at San Juan Basin Health in Durango, Colorado on Feb. 12, 2021. The event was created to assist those that have difficulty making it to other vaccination sites.

To be clear, most medical and public health experts believe that even if the state doesn’t hit herd immunity through vaccination, Colorado will be in a much better situation by late summer or early fall, making it possible for more people to return to work in person and move about the state with less concern about getting sick.

But vaccinations remain a key factor in ensuring the state doesn’t experience another deadly wave of infections and hospitalizations like it did late last year.

“It’s also important to recognize that the more people immune now, the fewer cases that will occur in the fall,” Herlihy said.

In the future, it’s possible that a lower level of transmission could continue to occur. There also could potentially be another wave of infections in the fall, but the size of that wave will depend on how many people are protected against the virus, Herlihy said.

She said it’s also possible people will need booster shots to bolster their immunity from the vaccines. This could be needed if future variants develop and are able to break through the protection offered by the current shots or because immunity from inoculations wanes.

The vaccines already available are also believed to protect against the various variants circulating the state. In fact, a May 5 study in The New England Journal of Medicine found that Pfizer’s COVID-19 shot offers strong protection against the B.1.351 and B.1.1.7 variants.

The B.1.351 variant, first found in South Africa, and B.1.1.7, first found in the United Kingdom, have been identified in Colorado. The B.1.1.7 variant makes up roughly half of the new cases in the state and is believed to be more contagious then the previous strain circulating the state.

The fact that the coronavirus is changing rapidly, and spawning such variants, is why public health experts said it is so important for people to get inoculated. A concern is that in the long term, if the virus continues to spread widely, a new and more contagious variant could develop that could hospitalize people despite their immunization.

“There’s a lot of uncertainty where the future will take us,” said Dr. Jon Samet, dean of the Colorado School of Public Health. “People just need to get vaccinated.”

With 2 million Coloradans fully vaccinated, the state is seeing vaccinations slow, even as public health officials are making the shots more widely available by eliminating appointments for drive-thru sites and sending mobile clinics to vulnerable communities.

Recently, as cases increased in Colorado, there has also been a rise in infections in children and in schools. Yet children under 16 aren’t eligible for the vaccine. That soon could change if the U.S. Food and Drug Administration authorizes Pfizer’s shot for those ages 12 to 15.

“That’s a big portion of the population that we have to think about vaccinating,” said Dr. Sean O’Leary, pediatric infectious disease specialist at Children’s Hospital Colorado. “We need to vaccinate kids not just to get herd immunity and pass this pandemic, but to protect the children themselves.”