COVID crushed the poor. Can Colorado make it right? 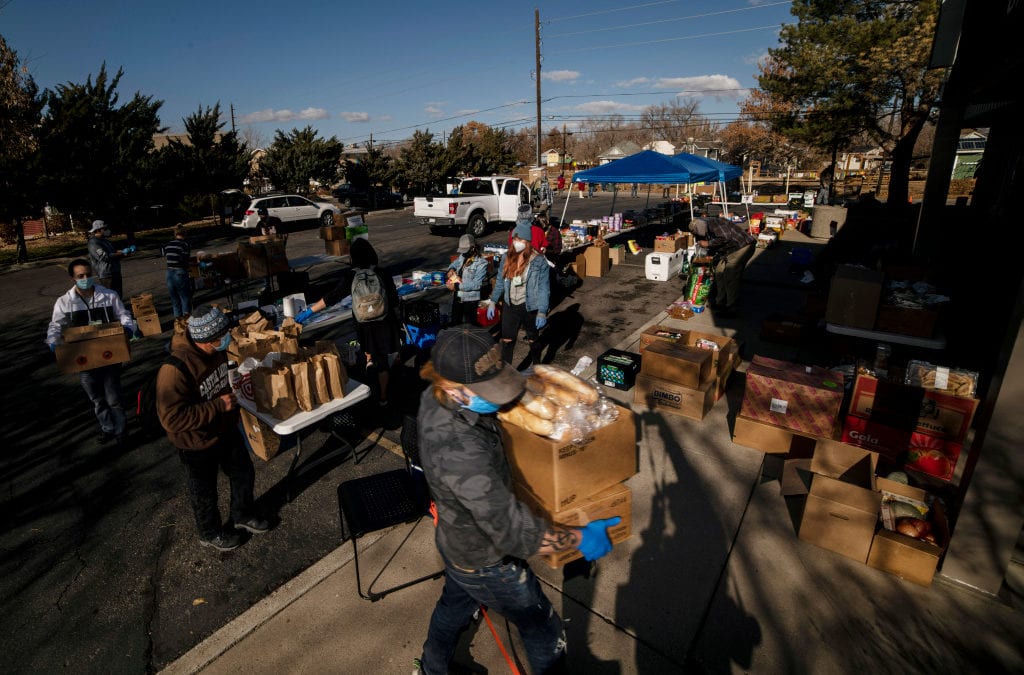 The pandemic has heaped suffering on so many — killing at least 2.6 million people around the world, over 527,000 Americans, and over 6,000 of our fellow Coloradans.

Since the pandemic began, only 55% of Coloradans report that they have enough money to pay for basic expenses, according to a December 2020 survey by Hunger Free Colorado. Hunger was a concern for 42% of respondents with 1 in 4 households calling it a “top concern.”

“The pandemic has laid bare the structural inequities of our economy, our state budget, and our tax code.” That’s what Senator Dominick Moreno, chairman of the legislature’s powerful Joint Budget Committee said when I asked him what the pandemic has done to the state budget. “We keep talking about a ‘K Shaped Recovery;’ some are actually doing better than before the pandemic. But plenty of others, especially those who were already struggling, are much worse off. So what are we going to do about it? We must have incredibly difficult conversations about changing the structure of our economy, our tax code, and the state budget. That’s the only thing that’s going to help people in a meaningful way.”

According to that Hunger Free Colorado survey, he’s right.

Almost 2 in 5 Coloradans lack reliable access to nutritious food, with people of color and households with children faring worse. In fact, 52% of non-white individuals are struggling to put food on the table. One out of four adults in Colorado reported having to skip meals because there wasn’t enough money for food, including one in five children.

It is a massive policy failure to allow any kid in the U.S. to go hungry. But food isn’t the only basic need that has been put further out of reach for those already struggling before the pandemic. At least 100 Coloradans have starved to death in the last year.

Cathy Alderman with the Colorado Coalition for the Homeless told me, “more than 75% of low-income households in Colorado can’t find an affordable place to live. Meanwhile, thousands of people across the country have second and third homes here that often remain empty more than 6 months out of any year.”

The housing crisis in Colorado is currently being made worse by speculators outbidding first-time homebuyers with all-cash offers, putting homeownership out of reach for many. Encouraging houses to become investment vehicles instead of homes for regular people is another policy failure.

The same people who lie to us about tax cuts for the rich lie about who fills in the gap if their dream of eviscerating government comes true. We’re told that all we have to do is get the government out of the way so that billionaires can step in with their enormous generosity. Well, billionaires have made trillions, and they have not lifted everyone out of poverty or blunted the impacts of the pandemic.

We can do better than a world where the whims of the wealthy determine who starves and who eats.

Colorado’s tax code is riddled with holes. Each one put there by a special interest group or a lobbyist hired to get an industry or sector special treatment, often in the form of uncollected taxes under the guise of economic development. Each of these individual measures may have seemed reasonable at the time of their passage, but when it all adds up, a quote comes to mind, “A billion here, a billion there, and pretty soon you’re talking real money.”

When the economy is down or an industry takes a beating, legions of lobbyists flock to the legislature asking for a carveout, a tax credit, or some other form of special treatment. Over time, these things add up, and when these industries begin to prosper, do they come back to the legislature, thank them for their support, and give the money back? Nope. So we’ve piled all of these little loopholes on top of each other over the years, and it’s costing us billions in funding for roads, schools, child hunger, and lowering the high cost of housing to put homeownership within the reach of families instead of investors.

There are a few specific conversations that we can have right now to recalibrate the scales so that the next decades don’t look like the past year. We need to start by ensuring that those of us who can’t afford high-priced lobbyists to get us special treatment at the Capitol still have an opportunity to earn a decent living, and not fall into the gutter if we fall on hard times.

In mid-January, Speaker of the House Alec Garnett addresses House members at the Capitol in Denver.

A progressive income tax starting with those making $250,000 per year could generate $2 billion per year and give anyone making less a tax cut. If we increase property taxes on second homes, we can send that money directly to first-time homebuyers to help them invest in the American dream. We can reclassify “residential property” to be the place where owners actually live. Anything else is an investment and should be taxed at a higher rate. With an estimated 30,000 unhoused Coloradans, there is no excuse to pretend that investment properties for AirBnB or VRBO or rental units are residences. If they’re businesses, or they generate business income, they should be taxed like businesses, and the revenue should ensure everyone has the opportunity to put a roof over their heads.

“The US hasn’t signed onto the Universal Declaration of Human Rights which lists food, housing and health care not as commodities, but as human rights. There are any number of ways to get there, but if you start with the idea that those are human rights, try different solutions, see the results, and iterate and improve, we could get a long way,” said Teva Sienicki, the CEO of Metro Caring, a Colorado anti-hunger organization and food bank.

Her ideas about how we can come out of the pandemic stronger include job guarantees, the childcare credit in President Joe Biden’s stimulus package, and a “food utility,” where you treat access to food like water, heat and electricity. Teva also said, “I’ve seen that if you put cash in people’s pockets, they can make the choices they need to, so that people don’t have to choose between food, clothes, or medicine or therapy. I’m a fan of anything that puts agency back in people’s hands.”

I’m one of those rare progressives who doesn’t think the government should be administering giant bureaucracies or programs, but instead build fairer systems to rebalance the scales when things get out of whack. The government is pretty good at resource distribution, as we’re beginning to see with the vaccine rollout now that people who actually believe the government should exist are in the driver’s seat instead of the other folks.

Carol Hedges, the director of the Colorado Fiscal Institute sums it up well, “the pandemic has revealed that we don’t have a system where money trickles down, it gets sucked up. By concentrating more and more in the hands of the wealthy few we undermine economic vitality because real economic growth happens when everybody has money to buy things — to pay rent, buy shoes and clothes and healthcare and movie tickets. Not only is this concentration of wealth immoral, but it undermines the sustainability and viability of our entire economy.”