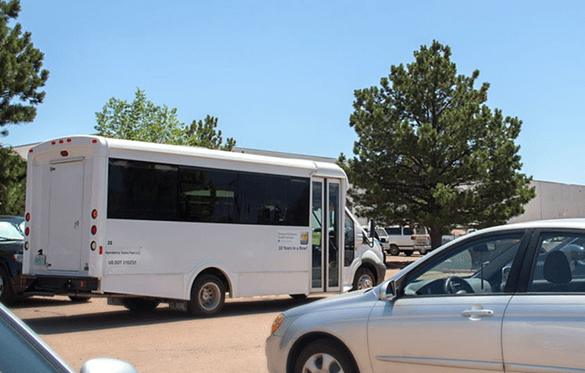 Shuttle buses and vans, restaurants and private special events could host more people amid the coronavirus pandemic under a variance application unanimously approved by El Paso County commissioners on June 23 and now awaiting approval by the state.

Under current state orders, up to 10 people can travel in shuttle buses and vans, which must have windows open during transport. Larger vehicles can contain no more than 50 percent of capacity, or less if distancing requirements cannot be met.

Under the county’s proposal, shuttle buses and vans would operate at 75 percent capacity or the maximum allowed as long as 6-foot distancing is observed. Riders must wear face coverings and windows must be open. In addition, hand sanitizer must be available to riders upon entering and exiting the vehicle, and the buses and vans must be cleaned and disinfected at least three times a day.

The county wants to change that to 50 percent capacity or 175 people, whichever is less, in restaurants and for private special events.

That would be an important change for hotels that host conferences and other events, notably The Broadmoor.

“This is important for the economy and for the tourism industry,” he said. “The one size fits all doesn’t really apply and should not apply. Those who have larger facilities should have a larger capacity particularly in conjunction with outdoor space.”

The Broadmoor’s facilities can handle thousands of people under normal circumstances.

“We need to get this economy rolling again,” Commission Chair Mark Waller said. “Travel and tourism is a big deal.”

El Paso County has seen an uptick in cases and deaths in the last nine days, compared to the nine days prior to that. From June 6 through June 14, 110 cases and four deaths were reported. Since June 15, nearly twice that number, 211 cases, have been tallied, and 11 people have died, according to El Paso County Public Health data.

Statewide, Colorado has 30,893 cases as of June 22, the most recent available; 5,366 people have been hospitalized, and 288,079 tests administered. The death count stands at 1,455 for those who died from COVID-19, and 1,665 for those who died with the disease but not necessarily because of it.

The number of commercial sales, however, dropped by 80 percent in April compared to January.

Total sales fell by about 10 percent during that time, which didn’t surprise Schleiker. “It’s not alarming, because title companies had to go through major business process changes to comply with social distancing,” he said.