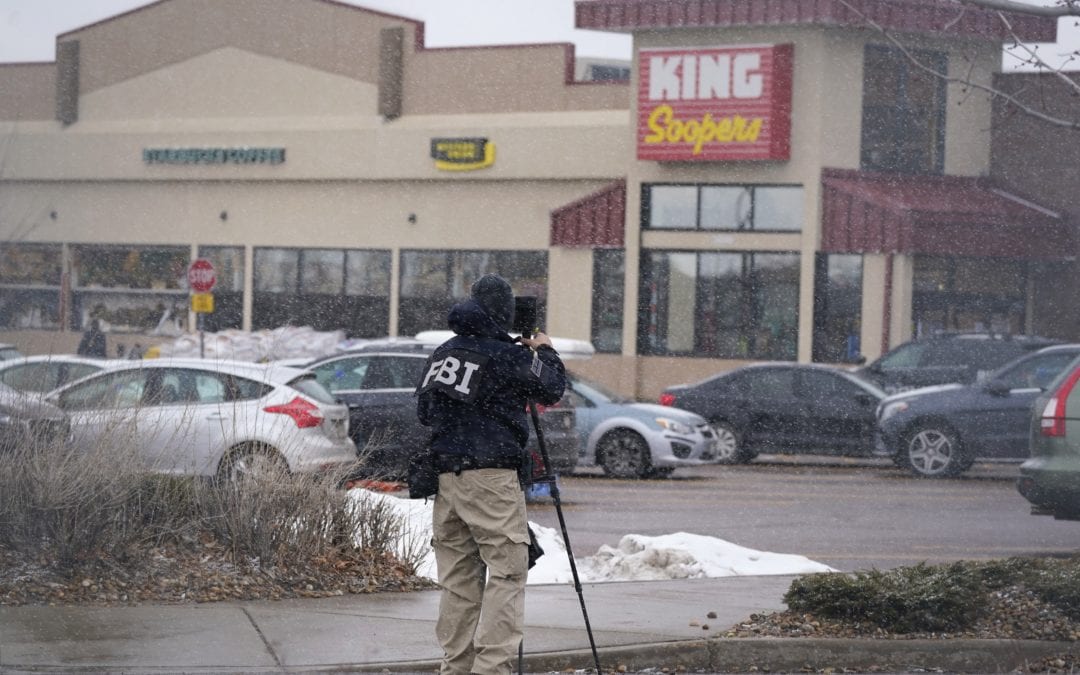 The headline on the front page of Tuesday’s Denver Post: “A Nightmare.”

The Boulder Daily Camera: “A Tragedy.”

The headline in the Colorado Springs Gazette: “Nightmare in Boulder.”

While it was all gut-wrenching, frightening and sickening, it was, sadly, all too familiar. Another mass shooting — just days after a shooting in metro Atlanta killed eight. We were still wrapping our brains around what happened in Georgia when we learned of the shootings in Colorado.

And now we go through what we always go through: heartfelt remembrances of the victims, the possible motives and background of the suspect, and conversations about gun control, which are usually split down political party lines.

As my Poynter colleague Al Tompkins wrote, “We will soon learn more about the victims of the latest mass shooting even before families have buried the dead from the last one. In time, we will learn more about the killer and a possible motive while politicians will offer thoughts and prayers. Following a high-profile mass killing, the public usually becomes briefly interested in some kind of gun control. But the support always fades.”

Unfortunately, journalists have gotten proficient at covering these awful tragedies because they happen far too often.

But just because we’ve been down this horrific path before and undoubtedly will again, that doesn’t mean journalists should treat this as just another day in America — although the frequency of such shootings makes it feel like it is now a part of our routine. This is now believed to be the 29th shooting with at least four fatalities in the past five years. (You can see the list compiled by The New York Times’ Daniel Victor and Jenny Gross.)

And journalists haven’t treated this as just another day. Here is some of the news coverage that stood out on Tuesday:

If you’re a journalist at The New York Times and you want to do some outside work, you better check with the Times first. In a memo obtained by several news outlets, the Times told staffers that they need to run all outside projects past a committee to make sure it doesn’t create a conflict or take them away from their Times jobs.

The memo said, “The committee will primarily review outside projects that have the potential to be competitive with our journalism and business, could conflict with or distract from your work or The Times, involve payment or could be covered in any other way by the policies defined by the Ethical Journalism Handbook.”

Examples of outside work might include book deals and TV and film projects, including consulting work. In addition, the committee will review audio projects such as podcasts, paid or unpaid newsletters and, according to the memo, “any activity requiring you take a leave of absence from The Times.”

The Hill’s Thomas Moore wrote, “The new committee won’t review unpaid or low-paid outside activities or work that would probably not be competitive. However, reporters should still run them past the standards editor or other approvers, the memo stated. These activities include one-off speaking invitations, panels and conferences, freelance articles, short form interviews, part-time teaching gigs, contests and competitions and reporting partnerships.”

Who is on this committee that will review outside projects? That hasn’t been made public.

The latest mandate appears to be in reaction to a recent controversy involving longtime Times columnist David Brooks, who was receiving money from an Aspen Institute project that was partly funded by Facebook. Brooks mentioned the project he was working on and Facebook in his writing, but never revealed that he was being compensated for it.

Honestly, it’s hard to believe this is coming up now. Seems pretty standard for a news outlet to have to sign off on work outside the company that could be viewed as a conflict of interest.

Join our free Election SOS summit on April 7 to learn insights from reporters around the country, including Vox, Enlace Latino NC, USA Today, and more.

Explanation for an appalling act

As I mentioned in Tuesday’s newsletter, the Asbury Park Press newspaper in New Jersey ran a caption over the weekend that was misogynistic, racist and included an expletive. The paper removed the caption from the website and executive editor Paul D’Ambrosio apologized. But how in the heck did it happen in the first place?

D’Ambrosio wrote a piece Tuesday with the headline: “How an offensive caption ended up online and the new checks we put in place.”

D’Ambrosio said he was “shocked and disgusted” when he learned about the headline. He originally thought someone had hacked the newspaper’s computer system, but wrote, “In reality, it was a reporter who admitted that he did a ‘stupid, stupid thing.’”

D’Ambrosio said the person who wrote it is “no longer with the company.” He also admitted that while an editor normally reads everything before it’s posted online, in some instances, reporters have the ability to post themselves, and that occasionally happens on breaking news stories. In this case, no second pair of eyes looked at the offensive caption. The caption was live from Saturday night and well into Sunday before it was discovered.

D’Ambrosio said he takes responsibility for what happened and wrote, “I instructed our staff to always put two sets of eyes on each piece of content, including stories and photos. No photo and caption will be published without another staffer looking it over, regardless of the time of day.”

According to The Seattle Times’ Jim Brunner and Lewis Kamb, the whole thing started because the sheriff, who is white, was following Sedrick Altheimer, a Black newspaper carrier, while Altheimer was on his morning route. Altheimer said he stopped during his route and asked Troyer why he was following him. Troyer, who was not in a police car and did not identify himself as a sheriff, accused Altheimer of trying to steal packages from house porches.

Altheimer got back in his car and continued to deliver the paper while Troyer continued to follow him. There was another confrontation, at which point Troyer called 911 and said someone was threatening to kill him. More than 40 officers showed up at the scene. Altheimer was searched for weapons and told police he was a delivery man, showing police the newspapers in his car.

Troyer reportedly told police on the scene that Altheimer didn’t threaten him but that it was clear Altheimer “wanted to fight.” Police did not detain Altheimer.

Troyer is now under fire locally for his actions that night. The Seattle Times editorial board is calling on Troyer to apologize, and others in the community want him to resign. As of Tuesday, Troyer had put out a statement saying, “I am saddened to learn that Mr. Altheimer felt he was treated in an unfair manner.” But he never did apologize.

Troyer then complained about The Seattle Times, telling KIRO Radio, “They didn’t let me respond to some of their accusations, they clearly guided it in one direction. I believe that can possibly be attributed to, and I believe it’s been made very clear on this show and other shows and throughout my election that I said I will not let Pierce County become King County, and I hope our area doesn’t become like Seattle. I don’t think they like me to begin with, because it seems like every time I have a conversation with The Seattle Times, it’s adversarial.”

The Poynter Report is our daily media newsletter. To have it delivered to your inbox Monday-Friday, sign up here.