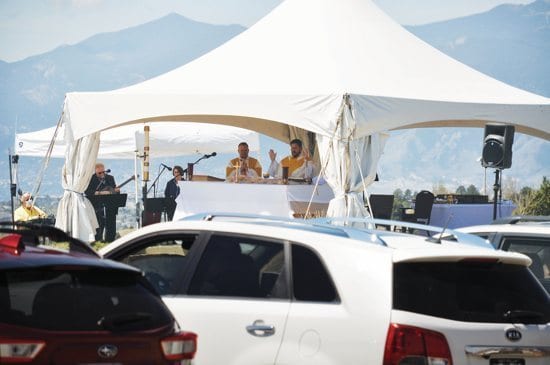 The court’s move was made in light of its recent decision in late November to lift similar restrictions for the Diocese of Brooklyn, New York. In early December, the court also told federal judges to reexamine limits on California churches based on this decision.

The justices sent the lawsuit against Colorado back to the lower courts with a 6-3 vote. High Plains Harvest Church in Ault had sued the state in May, calling the governor’s limit of 50 people for indoor worship too restrictive.

In a Dec. 9 filing with the Supreme Court, state officials said they had since amended the public health order “to remove capacity limits from all houses of worship at all times” in response to the Supreme Court’s recent decisions.

The Colorado officials said the case was moot because the church “already has the relief it seeks,” but it also defended the restrictions the state had imposed as valid measures to curb the spread of COVID-19, stressing they weren’t meant as a discrimination against religion.

Justices Stephen Breyer, Sonia Sotomayor and Elena Kagan reiterated the state’s recent action to lift restrictions and they said in their dissent, written by Kagan, that “there is no reason to think Colorado will reverse course — and so no reason to think Harvest Church will again face capacity limits.”

In its second ruling, with no recorded dissents, the court granted similar relief in the New Jersey lawsuit challenging worship restrictions. The suit against the state was filed by a priest and a rabbi.

The priest, Father Kevin Robinson, from St. Anthony of Padua in North Caldwell, belongs to the traditionalist Society of St. Pius X. The Vatican and the society have been in ongoing talks to seek a way to fully reintegrate its members back into the life of the Catholic Church.

The rabbi is from a synagogue in Lakewood. Both religious leaders said the state’s restrictions, limiting attendance at houses of worship to the smaller of 25% of capacity or 150 people, treated religious gatherings less favorably than secular activities and was a violation of their First Amendment rights.

The New Jersey plaintiffs also challenged the state’s mandate on face masks, requiring they be worn indoors. The religious leaders said this mandate similarly treated religious groups less favorably than secular groups where there were exemptions for eating and health reasons.

New Jersey officials, in a response filed Dec. 3, said the state’s lower courts did not have the benefit of the Supreme Court’s decision about New York church restrictions when they denied the challengers’ request for relief and said it would be appropriate for the Supreme Court to send the case back to the lower courts in light of that ruling, which is what happened.

The Supreme Court’s recent decisions have been a reversal from the 5-4 decision it issued in the summer when Justice Ruth Bader Ginsburg was on the bench. Then, the court upheld Nevada’s limits on congregation sizes, denying a request by a Nevada church for permission to have larger gatherings, like those permitted in the state’s casinos, restaurants and other businesses.

The court specifically singled out the provisions of Newsom’s “Blueprint for a Safer Economy” and his “Regional Stay at Home Order” as failing to treat houses of worship in a manner “equal to the favored class of entities” permitted to engage in indoor activities.

And on Dec. 11, the Archdiocese of Washington petitioned the U.S. District Court for the District of Columbia to lift the 50-person cap on indoor religious gatherings. The archdiocese said the restriction, part of an executive order issued in November by the District’s Mayor Muriel Bowser, violated the Religious Freedom Restoration Act, the First Amendment’s free exercise clause, and the First Amendment’s guarantees of freedom of speech, assembly and association.

It also said the cap on religious services singled out religious groups for more restrictive COVID-19 limitations on public gatherings than those placed on businesses and other venues in the city.