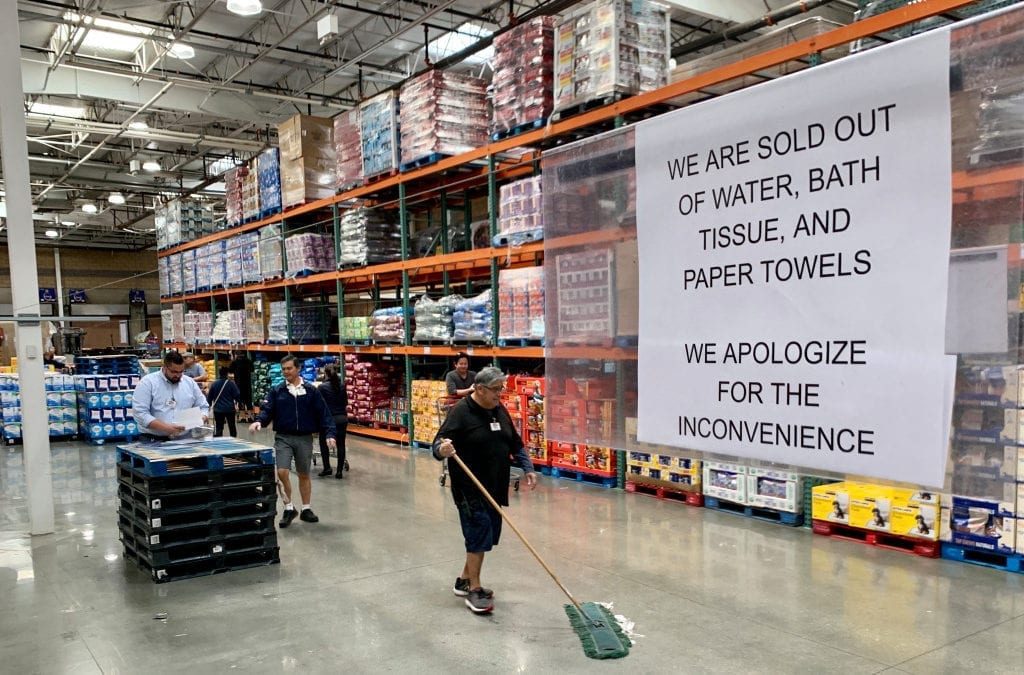 Big-box stores throughout Southern California are grappling with dwindling supplies of bottled water, toilet paper, bleach and hand sanitizer as worried shoppers stock up amid news of the spreading coronavirus and local quarantines.

Shoppers at the Sam’s Club in Fullerton walk past empty bays that once held cases of Member’s Mark bottled water. The membership club owned by Walmart sold out of its namesake water after rationing supplies over the weekend, according to one employee. All that remained Monday was a few cases of Arrowhead bottled water. Shoppers were busy stocking up on household supplies amid coronavirus headlines that could spur some residents to stay home. (Samantha Gowen/SCNG)

Signs hanging inside a Costco store in Cypress notified customers that they were out of supplies on Monday, March 2. (Photo by Jeff Gritchen, Orange County Register/SCNG)

The gallery will resume inseconds

Signs hanging inside Costco notify customers that they are out of supplies on March 2, 2020, in Cypress, CA.
(Photo by Jeff Gritchen, Orange County Register/SCNG)

Signs hanging inside Costco notify customers that they are out of supplies on March 2, 2020, in Cypress, CA.
(Photo by Jeff Gritchen, Orange County Register/SCNG)

Shoppers visit a Costco Wholesale in Tigard, Ore., Saturday, Feb. 29, 2020, after reports of Oregon’s first case of coronavirus was announced in the nearby Oregon city of Lake Oswego on Friday. (AP Photo/Gillian Flaccus)

Shoppers visit a Costco Wholesale in Tigard, Ore., Saturday, Feb. 29, 2020, after reports of Oregon’s first case of coronavirus was announced in the nearby Oregon city of Lake Oswego on Friday. (AP Photo/Gillian Flaccus)

What began as a busy shopping weekend Feb. 29 spiraled into a scene more typical of storm preparations: empty shelves and carts teetering with bulk supplies at Costco, Sam’s Club, Target and local drugstores.

By Sunday, supplies were waning and stores from Ontario to south Orange County were rationing water and toilet paper. At Sam’s Club in Fullerton, the Member’s Mark store-brand water was sold out Monday after a “crazy weekend,” according to one employee.

A typically quiet shopping day, Monday wound up almost as hectic as the weekend as more shoppers lined up to buy their share.

“This is not normal,” a Sam’s Club employee said with a laugh.

News on Friday of 600 people quarantined in Orange County, plus burgeoning numbers of confirmed coronavirus cases in the U.S. and California likely spooked residents into their buying binge.

Shelves ordinarily stocked full of hand sanitizers, rubbing alcohol and bleach at a Target on East Colorado Boulevard in Pasadena had gaping holes, while the store’s inventory of cold and flu medicine was virtually depleted.

Pasadena resident Julie Ward said she was stocking up before supplies ran out.

“I’m just re-stocking the medicine cabinet to make sure I have everything on hand in case we need to have it … and I’m going to use it at some point, anyway,” she said. “It’s just in case we get stuck in the house for two weeks.

A manager at Target on Arlington Avenue in Riverside said her store was dealing with an ongoing shortage of masks, hand sanitizers and cough medicine. Face masks have been selling fast over the last three weeks, she said.

Will these big-box stores be able to replenish all of the merchandise that’s flying off the shelves?

It depends on the store, according to Burt Flickinger III, managing director for the retail consulting firm Strategic Resource Group.

“Albertsons, Vons and Kroger, which owns Ralphs, have all invested extensively in having their own trucking fleets and local warehouses that are half a million to a million square feet in all of their major markets in California and across the country,” he said. “They have the working capital to re-supply their stores quickly.”

But Target, he said, will have a tougher time keeping up.

“Target has outsourced its distribution to third-party wholesalers which tend to be very lean on inventory,” he said. “When other competitors are increasing deliveries, it will be hard for Target to get extra deliveries on a weekly basis.”

When contacted Monday, Target declined to comment on how the coronavirus has affected its operations.

Costco also had resupply issues Monday. Shoppers at a store in Signal Hill circled an uncharacteristically barren aisle, exchanging confused glances — all the water was gone. A manager who declined to give his last name at the Lakewood Costco said it was chaotic at his store as well.

“It’s busier than Christmas,” he said. “Yesterday the lines were all the way to the alcohol section.”

Is all the shopping overkill or appropriate?

“We’re still in the flu season, so any precautions you might take for the flu we recommend you apply to this,” he said. “Frequent hand washing is good, and if you are sick don’t go to work or school. Stay at home, unless you are so symptomatic that you need to go to the emergency department.”

Nordt also advises people not to buy up masks in an effort to protect themselves from the virus.

“If you aren’t sick it doesn’t make a whole lot of sense,” he said. “And there’s a shortage of masks. Hospital providers need those masks for people who are really sick.”

Nordt said Southland residents shouldn’t necessarily avoid public places, as the Centers For Disease Control and Prevention has not declared the outbreak a pandemic.

“People have to make their own risk assessment regarding that,” he said. “I don’t know of any universities or workplaces that are closed. It’s pretty much business as usual.”

The coronavirus outbreak has so far sickened more than 90,200 people, according to official counts.

At least 3,081 people have died, all but 169 in mainland China, the New York Times reported. Of the six reported U.S. deaths, four were residents at the Life Care Center nursing care facility in Kirkland, ironically the home of Costco.

Global health officials have sought to reassure the public that the virus remains a manageable threat.

“Containment is feasible and must remain the top priority for all countries,” World Health Organization chief Tedros Adhanom Ghebreyesus said.

The virus may not be a pandemic, but its effect on U.S. markets is close. The Organization for Economic Cooperation and Development warned that the world economy could contract this quarter for the first time since the international financial crisis more than a decade ago.

The Dow Jones Industrial Average soared nearly 1,300 points, or 5%, Monday as stocks roared back from a seven-day rout on hopes that central banks will take action to shield the global economy from the effects of the coronavirus outbreak.

Correspondent Kat Schuster and The Associated Press contributed to this report.