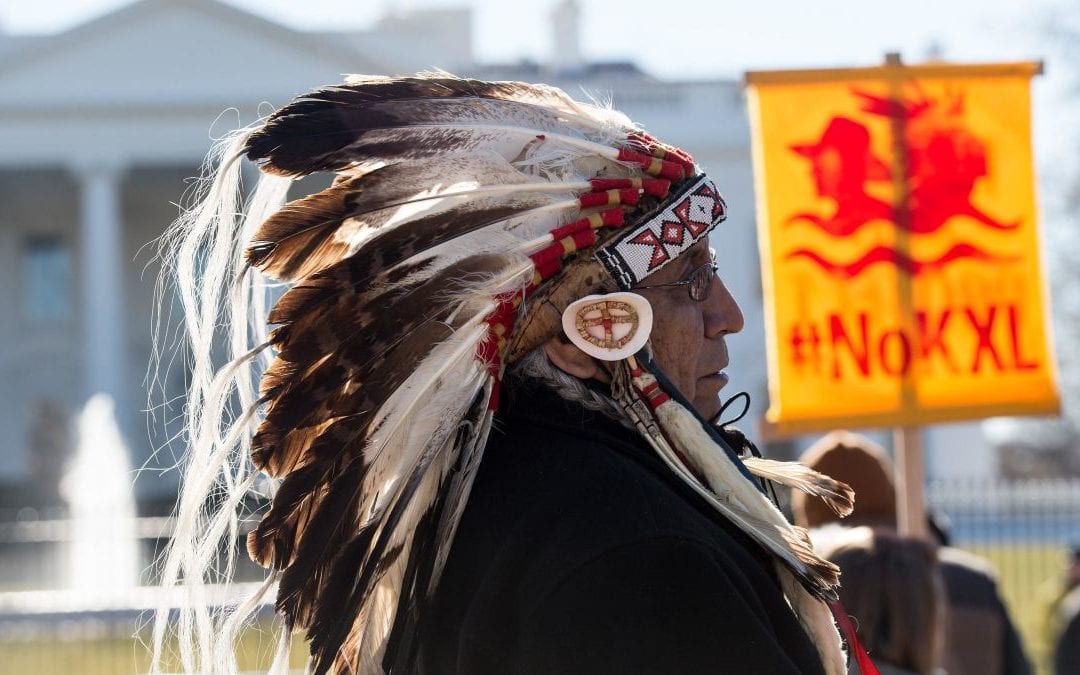 The threat of an unfamiliar virus devastating Native American communities is as old as colonialism itself. When European empires sailed to North American shores in the 15th century, settlers arrived with death as a companion. Diseases such as smallpox and influenza decimated tribal numbers, pushing some to the brink of extinction. Germs were the first genocide against indigenous peoples, long before the direct violent assault they faced from white colonizers.

Now, the threat looks a little different. The covid-19 pandemic has killed thousands globally, and the U.S. officially has the most cases in the world. To protect public health and prevent the virus from spreading further, health officials are advising non-essential businesses to close and people to stay home. Despite the global health crisis, however, energy company TC Energy (formerly TransCanada) still plans to start the construction of the controversial Keystone XL Pipeline by April. The move would continue a long line of colonial violence.

“This is an established genocidal act by those who deem themselves conquerors,” Faith Spotted Eagle, a grandmother with indigenous women-led organization Brave Heart Society that’s been challenging the pipeline, told Earther. “It has been occurring since contact.”

Several tribes that have sued the company and the federal government over Keystone XL. These tribal communities–which include the Rosebud Sioux Tribe in South Dakota and the Fort Belknap Indian Community in Montana—have always worried about the impacts this proposed pipeline would have on their water and cultural resources buried in the soil. Now, they’re adding the coronavirus to their list of concerns. In January, TC Energy set April as the official launch of construction. Since then, the parties have been in a legal back-and-forth over construction. Unfortunately, the court pushed back its hearing on this decision to April 16—more than two weeks after construction should begin.

In response to the urgency of the covid-19 pandemic, the tribes filed a temporary restraining order against TC Energy and the federal government March 17. The goal was to immediately halt the pipeline’s construction as a temporary restraining order is pretty extraordinary, Wesley Furlong, a staff attorney representing the tribes with the Native American Rights Fund, told Earther. Still, the court said the order would not be discussed until the mid-April hearing. In this filing, however, the tribe adds the more recent issue around the coronavirus.

“[The argument] is certainly a product of the moment we’re living in now,” Furlong said. “We just happened to be in the middle of briefing… when this [virus] really exploded across the country  and [presents] itself as an issue the tribes are very concerned about—and there is a mechanism that we had to be able to incorporate those concerns going forward .”

TC Energy has responded that this argument is invalid because tribes never raised these concerns during public comment periods in 2014 and 2019. But of course those comment periods were long before the coronavirus posed a threat to the world, let alone their communities. The company goes further in its legal response to argue that the virus is (emphasis theirs) “not an adverse environmental effect of construction of Keystone XL” and, therefore, not protected under the National Environmental Policy Act (NEPA).

Two legal experts told Earther that this defense is weak as hell. Federal environmental laws, such as NEPA, exist to protect public health, Carla Fredericks, the director of the American Indian Law Clinic at the University of Colorado, told Earther. In addition, the law also looks at how a project would impact the quality of the “human environment,” so such impacts from the virus should fall under its umbrella, Deborah Sivas, director of the Environmental Law Clinic at Stanford Law School, wrote in an email to Earther.

“It seems unlikely that the risk of spreading disease does not fall within that framework,” Sivas said.

One of the biggest concerns is the risk of “man camps” that pop up whenever construction on a project like this begins. These temporary constellations of workers already pose a threat to the physical safety of women and children, but they could be vectors for covid-19 to spread into indigenous and surrounding communities, too.

“When TC Energy brings those men in, it’s like bringing smallpox blankets in ,” Spotted Eagle said. “It’s no different. It’s exactly the same action, and it’s sanctioned by the government.”

Proving the risk of something that has yet to happen may be challenging in court. Still, the threat to tribal communities is something to take seriously, especially because of the health issues they already face and the lack of easy access to quality healthcare. And the unknowns are in some way more of a reason to act and delay construction.

“In some ways, this crisis is new and unprecedented, and, in other ways, the health implications are a reality that Naive Americans communities have been facing for a long time,” Fredericks told Earther.

The health crisis already afflicting Indian Country doesn’t help the situation. Native Americans are most likely to have diabetes in the U.S., which is a major risk factor for the coronavirus. This population also sees double the rate of heart disease than the rest of the U.S. and has the highest prevalence of cigarette smoking in the country, which weakens the respiratory system the virus attacks.

So far, Indian Health Services has confirmed at least 83 covid-19 cases among the 2,156 Native Americans and Alaska Natives who have been tested. The Rosebud Sioux Tribe confirmed its first coronavirus case on Thursday. Tribes across Montana, including Fort Belknap, have already declared states of emergency in preparation for the virus reaching their communities.

The added threat of man camps bringing this contagious virus to communities while building a pipeline they don’t want adds salt to an already-bloody wound.