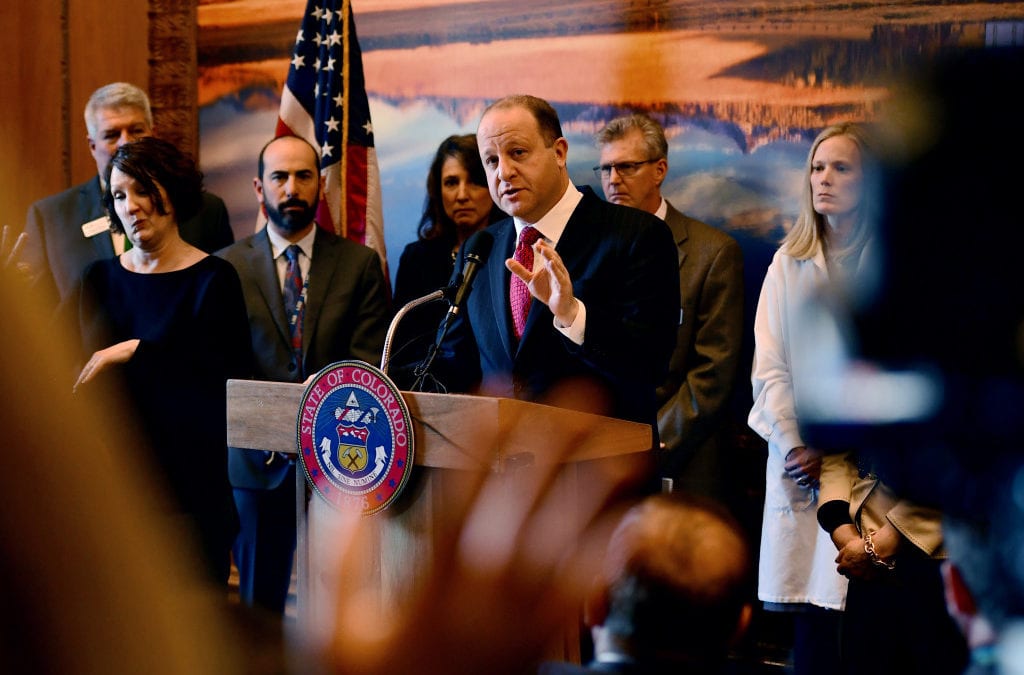 Gov. Jared Polis declared a state of emergency Tuesday, saying the heightened step will help Colorado control the spread of the new coronavirus by expanding testing and helping those most at risk avoid exposure to the highly infectious virus.

While Polis stressed Colorado remains “open for business,” the move to declare an emergency reflects the gravity the state finds itself in as the coronavirus outbreak grows in the United States.

“What it does is it gives us access to resources and more legal flexibility to take steps now to protect the most vulnerable and better contain the outbreak, truly reducing the chances of the trajectory that has occurred in countries like Italy from occurring here in Colorado,” Polis said.

The number of cases in Colorado reached 17 on Tuesday, and state officials expect that figure to grow as the new measure gives them more flexibility to test individuals, including through a major private lab.

And while health officials have not yet confirmed that the coronavirus is spreading through any Colorado communities, that appears to be inevitable, with the governor saying such a case is expected in a matter of days.

“We need to have a heightened sense of urgency about this and take really bold acts to prevent the spread,” said Scott Bookman, who is overseeing the Colorado Department of Public Health and Environment’s response to COVID-19, the disease caused by the new coronavirus.

Wendy Greenwald’s doctor wanted to test the Denver resident for the new coronavirus last week after she came up negative for the flu and other respiratory viruses.

But, Greenwald said, the hospital told her the state wouldn’t process the test because the two places she recently had traveled to — Arizona and the District of Columbia — aren’t transmission hotspots.

“They said I didn’t fit the (testing) protocol because I didn’t go to China or Italy,” she said.

So instead, they sent her home with an antibiotic for possible pneumonia. Then, on Monday, Greenwald’s doctor received permission to test her for COVID-19. She’s now waiting on the results and in self-isolation.

“It would be nice to know since I was around a lot of people” in Washington, D.C., she said. “I would love to know if I can leave when I’m getting better, or if I should stay inside.”

This is expected to change as the emergency declaration gives state health officials an opening to significantly ramp up testing for COVID-19. The governor’s goal is to reach a point where anyone exhibiting flu-like symptoms can get tested for the disease.

The state has 900 test kits for the coronavirus, but Polis said he asked Vice President Mike Pence for 1,500 more testing kits on Monday.

“We need more testing because the sooner we can identify positive cases and hotspots… the more effectively we can isolate those who test positive and we can limit and slow the spread of the virus,” he said.

“We don’t want any red tape to get in the way of people getting the test or the treatment that they need,” he added.

Previously, Colorado’s state lab, which has a capacity to run up to 160 tests a day, had to follow guidelines from the U.S. Centers for Disease Control and Prevention on who to test. This limited testing to those who were sick and traveled overseas or had close contact with an infected person.

Now, the state health department is opening a drive-up lab, at 8100 E. Lowry Blvd, for testing at 10 a.m. Wednesday, which individuals can use if a doctor orders them to get a coronavirus test.

Patient samples taken by doctors and hospitals in Colorado also can now go to LabCorp, one of the nation’s largest testing companies. Hospitals may also begin performing tests themselves in the future.

“That gives us more information about where cases are being seen,” Bookman said. “The more we know, the better.”

Health officials are also concerned about 13 Australians in Aspen who are experiencing coronavirus symptoms after contact with an infected person. Local health officials took samples from the individuals and sent them to the state for testing.

Both the U.S. Air Force Academy and Fort Carson, noting the spread of COVID-19 in the state, raised their health alert levels on Thursday.

It’s expected more people will have to stay home, either because they are sick or part of a vulnerable group, such as older Coloradans and those with underlying health issues. With that in mind, the governor also issued orders to address disruptions to daily life.

And, Polis said, he “won’t hesitate” to use his authority to issue additional orders regarding the coronavirus in the future.

“Our goal is not only to save lives, but it’s also to prevent the widespread disruption that we’re seeing in Italy, China” and elsewhere, he said.

Polis has requested that private employers in the state “voluntarily” provide paid sick leave to workers during the outbreak.

The state Department of Labor and Employment is also directed to ensure Coloradans that handle food or work in hospitality, child care, health care and education can get paid sick leave so they can stay home if they develop flu-like symptoms.

The state is also looking at ways to address individual wages when a person tests positive for the coronavirus and lacks access to paid leave, so “that people are able to make their rent and afford food,” Polis said.

Another move the state is making is to temporarily lift the requirement that people 65 and older must go to the Department of Motor Vehicles in person to renew their driver’s license. With this requirement waived, individuals 65 and older can renew their license online.

The waiving of this requirement comes as local health officials said Monday that one of the Douglas County coronavirus patients visited the Castle Rock Department of Motor Vehicles, at 301 Wilcox St., on March 3. She visited between noon and 3 p.m.