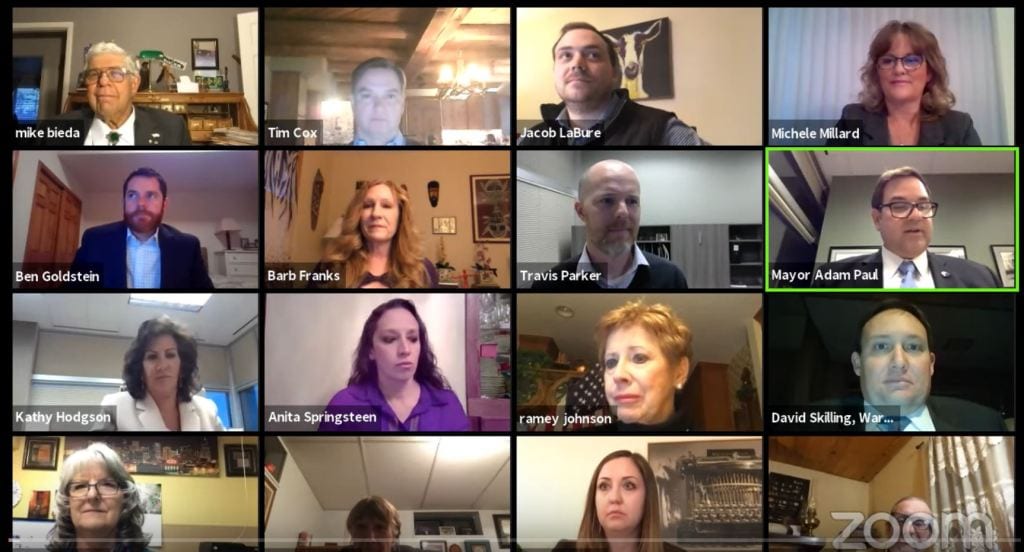 As state officials close countless public gathering places to slow the spread of the coronavirus, cities and towns across Colorado are leveraging the latest technology to continue doing their civic duty — though the efforts at virtual democracy haven’t come without fits and starts.

Municipalities across Colorado have long broadcast public meetings on a local cable channel or livestreamed them on the web, but unprecedented crowd restrictions prompted by the pandemic have forced local officials to scramble to keep city and county agendas intact while not violating the requirements of the state’s open meetings laws.

“We don’t want public participation being lost in any of this,” said Lakewood City Councilman Charley Able. “It’s an important part of governance.”

Able said he felt unsettled during Lakewood’s first virtual city council meeting on March 23, for which the city’s elected leaders convened in a Hollywood Squares-like grid on the virtual meeting platform Zoom. He said public input wasn’t taken during the proceedings, but residents did have a chance to submit commentary on the city website ahead of time.

“I would like to have something in place (for public comment) by the next meeting,” he said. “I don’t think there’s anything more important in our roles than our attention to public attitudes as expressed by the public.”

Colorado law doesn’t require that government meetings allow people to speak — only that the public be able to watch or listen in person or electronically, said Colorado Freedom of Information Coalition Executive Director Jeff Roberts.

But having a chance to speak has long been the norm in Colorado and, Roberts said, that’s where some cities and counties are coming up short in the mad dash to radically change the way elected leaders meet.

Aurora Mayor Mike Coffman, who has presided over some of the more tumultuous council meetings in the metro area of late as community members have taken to the microphone to challenge the city on police practices and immigration policies, said the city’s first virtual council meeting last month featured emailed questions from the public read aloud by the clerk.

“However, for our next meeting, we are looking at a call-in system that would allow residents to give their input in their own voices during the meeting,” Coffman said. “I believe that our residents have a right to be heard and, without this technology, that right would be sadly abridged.”

Leaders in Arvada, who will hold their first meeting on Zoom on Monday, are committed to postponing hearings on contentious topics such as a proposal to change garbage collection.

“I think it is best to take public testimony where the Council can observe the speaker, and our citizens can look into our collective eyes when we make our decisions,” Mayor Marc Williams said.

That follows the spirit of a recent request made by more than 100 media and free-speech organizations to local governments across the country, which is posted to the National Freedom of Information Coalition website.

“Government bodies should not opportunistically take advantage of the public’s inability to attend large gatherings to make critical decisions affecting the public’s interest if those decisions can reasonably be postponed,” the letter states. “Just as citizens are being asked to defer nonessential travel and errands, so should government agencies defer noncritical policy-making decisions until full and meaningful public involvement can be guaranteed.”

Denver City Council has met in person so far but starting Monday members will have the option to participate electronically.

Professor Todd Ely, director of the Center for Local Government Research and Training at the University of Colorado at Denver, said no matter how good the technology gets, virtual meetings will never trump in-person gatherings when it comes to conducting local civic business.

“I highly doubt that anybody is going to come out of this and say we’re going full remote,” he said. “Politics is a contact sport.”

Still, there is a recognition that while technology shouldn’t replace the old-fashioned council or county commissioner meeting, society is fortunate to have the option in an emergency. Williams said if the coronavirus pandemic had struck 20 years ago there would have been far more disruption to city business.

“Technology has become a great tool to allow our city team to work remotely and efficiently,” the Arvada mayor said. “Meetings would likely have been canceled back then.”