Coronavirus bills push lobbying to record total in Colorado. Here’s a look at the big spenders. 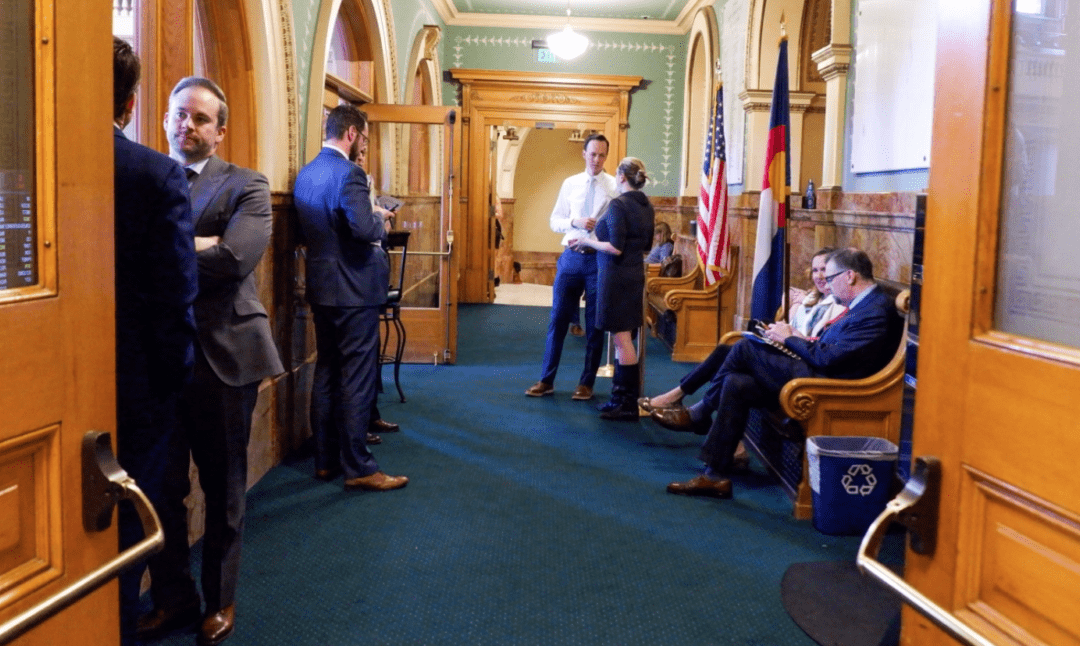 The total spent on lobbying at the Colorado Capitol topped $40 million this session — a record driven in part because of contentious last-minute legislation introduced in response to the coronavirus.

The spending to lobby the Democratic-led General Assembly is nearly 12% higher than 2019 and $10 million more than in 2016, according to an analysis by and The Colorado News Collaborative (COLab) of state lobbying records.

A measure requiring employers to provide paid sick leave drew the most attention of lobbyists and their clients, followed by a bill to free up more cash for education by eliminating some tax breaks.

Six of the 15 most lobbied bills were introduced after May 26, when the legislature returned from a two-month hiatus prompted by concerns about the spread of COVID-19. All those bills, including a police reform measure introduced after protests over the death of George Floyd, became law.

Another seven of the most lobbied bills died, with several abandoned as lawmakers focused on the battered budget and issues surrounding the pandemic. Only two heavily lobbied bills introduced early in the session – increased regulation of tobacco products and higher fines for environmental violations – became law.

Nearly 600 lobbyists and firms reported being paid by more than 1,100 companies, associations, local governments and others to influence lawmakers in the fiscal year from July 2019 through June, an analysis by The Sun and COLab found.

Earlier this year, a new spending record appeared likely even though the General Assembly took a break March 14. The final flurry of legislation when lawmakers returned only amplified the influence game at the Capitol pushing spending to $40.1 million, The Sun and COLab found.

The increased lobbying — in particular on business issues such as sick leave and tax breaks — is not a surprise to Loren Furman, the lobbyist for the Colorado Chamber of Commerce.

“What you are seeing is the legislature is introducing legislation that goes against business interests,” she said. “So the increase in lobbyists is to try to find a middle ground or way to defeat those bills that are going to hurt the economy.”

Looking ahead, she said, “you’re going to continue to see the lobbying effort grow and grow” in response to efforts to put more regulations on businesses.

Legislation introduced in response to the pandemic shifted the attention of lobbyists, as Democratic leaders in the two chambers abandoned some high-profile efforts.

A bill to create a public option health insurance plan and a measure that required businesses to provide extended paid family leave were both abandoned by Democratic sponsors, as was a bill to regulate arbitration that had passed the state Senate. All three were among the most heavily lobbied measures in the first half of the session.

The day the session resumed, lawmakers introduced legislation mandating paid sick leave to ensure essential employees won’t report to work sick amid the COVID-19 crisis. About 170 companies and organizations hired lobbyists to work on the bill.

“We ended up fighting a lot of business interests,” said Kjersten Forseth, lobbyist for the AFL-CIO, a union and a prime supporter of the bill.

But she said the coronavirus pandemic, combined with previous discussion about a considerably more expansive paid family leave, helped pave the way for the narrower paid sick time measure. “Before COVID hit, people were still going to work with the flu,” she said. “They were sending their kids to school with the flu.”

A measure to remove some business tax breaks to find more money for education as the state faced a $3 billion budget shortfall drew about 160 lobbyists and firms. The lobbying, along with pressure from Democratic Gov. Jared Polis, led lawmakers to significantly pare back the proposal that would have ended nine tax breaks to generate $1.6 billion over four fiscal years. In the end, the bill eliminated only four tax breaks to add $189 million to the state coffers in the same period.

“It was heavily lobbied because a lot of businesses hire people and make investments based on statutes like these,” said Mike Beasley, a lobbyist who represented several clients on the bill. “Someone’s loophole is someone else’s bottom line or investment needed to hire people.”

Beasley predicted the measure will be revisited next year, depending on the outcome of November ballot initiatives seeking to change tax policy and whether the federal government offers more financial assistance to state governments.

Other coronavirus-related legislation that drew heavy lobbying included measures to provide workers compensation coverage for those who contract the virus on the job, improve affordability of health insurance and protect whistleblowers during public health emergencies.

In terms of the companies and organizations paying to influence lawmakers, the records show Xcel Energy, the state’s largest electricity provider, once again topped the list for spending to lobby at the statehouse. The company employed three in-house lobbyists and three independent lobbyists or firms, including Beasley. The lobbyists reported nearly $441,000 from Xcel.

Xcel lobbyists reported working on nearly 20 bills, including a failed measure that would have studied the impacts of allowing communities to choose energy providers that the company opposed. The company supported another failed bill that would have allowed utility companies to create new clean energy projects in parts of the state suffering from loss of coal-powered plants. That measure was among the many killed when the legislature returned in late May.

COPIC, the state’s primary medical liability insurer, was the second largest spender, putting nearly $240,000 into influencing lawmakers. The company supported a bill to allow certain investments by insurance companies that became law, and it opposed an insurance regulation measure that failed early in the session.

The lobbying reports from the Secretary of State’s Office often include duplicate income reports, such as payments from lobbying firms to their employees or to subcontractors, but those were excluded from the analysis when possible.

Others in the top 10 list of entities that hired lobbyists are not traditional big spenders in Colorado.

But the group’s national lobbying firm also spent $4.8 million in expenses aimed at defeating the measure, including $4.4 million in broadcast and digital ads.

AARP was the No. 4 spender at $226,000, records show. But the big total reflects the fact that the group’s Colorado director, Bob Murphy, registered as a lobbyist and reported much of his income to the state.

Kelli Fritts, AARP’s associate state director for advocacy, noted that 2020 brought a success the group has worked on for years: a retirement savings plan for private sector employees. Fritts said it was a major accomplishment to get the bill passed in the final three weeks of the disrupted session. It will impact 900,000 Coloradans, she said.

Then there’s the Colorado Catholic Conference, which spent nearly $209,000, almost twice the $111,000 the group spent in 2019. That was partly because the conference was searching for a new executive director during the legislative session, a spokesman for the Archdiocese of Denver said in a statement. “Thus (we) relied more heavily on contract lobbyists than in past sessions,” said Mark Haas, the director of public relations for the archdiocese.

Three lobbying firms represented the conference’s interests on more than 20 bills, including the successful repeal of the death penalty. Denver Auxiliary Bishop Jorge Rodriguez testified at committee hearings supporting the end of capital punishment — long a priority for Democrats and the church.

The church also actively opposed a bill that would have expanded the statute of limitations for people who’ve been sexually assaulted to sue their perpetrators. That measure died in the final days of the session.

In a typical 120-day session that runs from January to early May, the peak activity comes in April as the term nears the end. But this year’s bifurcated session extended the lobbying into June, which is when the spike in spending came, an analysis of the spending records shows.

Ahead of the next term, the focus on the statehouse is only expected to continue. Beasley agrees that spending will continue to rise, particularly if Democrats retain the majority in both chambers and join the governor in seeking fundamental changes in government.

“Colorado has been an incubator of ideas from the center and center-left that folks not just here but across the country are interested in pursuing,” he said.

This story is a part of #FollowtheMoneyCO, a project of the Colorado News Collaborative (COLab), edited by The Colorado Sun with support from the Colorado Media Project.