Construction rolls on despite COVID-19 | The Colorado Springs Business Journal 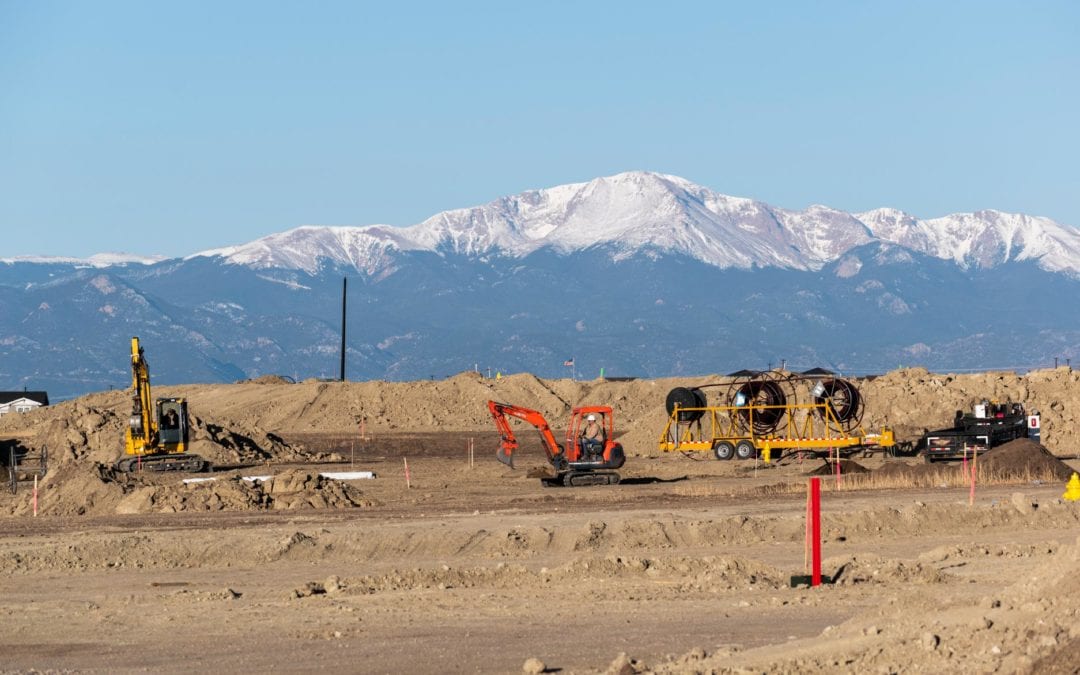 The construction work Colorado Springs has been counting on — the City for Champions projects, road and infrastructure improvements, and apartment and home construction — is continuing despite the COVID-19 pandemic.

No one knows how long it will be able to proceed if things get worse. But for now, construction has been deemed an essential industry by the state and is one of the area’s employment bright spots.

Keeping workers safe is a critical concern, construction managers say, to protect them and prevent spreading the disease, and to make sure companies are able to meet their contractual obligations.

Most projects are still aiming for completion according to their original timelines; contractors are focusing on getting the jobs done while adjusting to new conditions and procedures.

“We’ve never seen the entire world turn off like this, said Jeff Finn, vice president at Nor’wood Development Group. “We’ve never had to adapt to still doing our jobs remotely and trying to stay as productive as we can.”

But from a community perspective, Finn said, “we are really well positioned. I don’t think we have overbuilt. We have some really great economic development prospects out there, like Space Force. I believe we’re on about as solid a footing as we could possibly be.”

The construction industry is a mainstay of the national and local economies.

“In my opinion, housing is important to keep going with, especially rental housing,” Finn said. “We know we have a housing shortage, not only in the community but in the country. Stopping housing would only contribute to the adverse effects of the economic fallout we’re seeing.”

Construction on infrastructure such as roads and bridges is critical for keeping supply lines open and keeping people healthy.

In southwest downtown, where Nor’wood is heavily invested, construction continues on the U.S. Olympic and Paralympic Museum, the Vermijo and Sierra Madre streetscapes, the pedestrian bridge that will connect America the Beautiful Park to downtown’s core and the Downtown Stadium.

Work on the stadium and bridge has just begun, but the museum is nearing completion.

Demand for one of Nor’wood’s nearby apartment projects, The Mae on Cascade, hasn’t slackened, Finn said.

“Our interest list is up to almost 100 people — that’s almost double from when we started,” he said. “People still have to have places to live.”

Nor’wood Vice President Fred Veitch said the company’s projects in northern Colorado Springs also are proceeding. In the Interquest area, those projects include a building for Chase Bank and Subway and a multitenant building at Interquest, both undergoing finish work.

“We’re continuing with our permitting for a Marriott Courtyard hotel and expect to start that next month,” Veitch said. “We’re working on leasing another inline [multitenant] building; we won’t start that building until we’re over 50 percent.”

Construction also is continuing on projects being built by the city, county and state.

“With fewer vehicles on the roads, CDOT crews will be able to work more efficiently and safely,” she said.

Paving will not start until the weather warms, but five concrete crews are working on pre-overlay sidewalk, curb and gutter projects, he said.

“The construction industry and manufacturing are the two things propping up our economy right now,” Easton said. “It keeps people working and moves us further along for getting these projects done that we told citizens we would complete for them.”

One of the biggest projects underway now — and one of the most critical — is the extension of Powers Boulevard from Voyager Parkway to Interstate 25, a joint undertaking involving the state, city and a metro district.

“To shut that down would leave a lot of things undone for an undetermined amount of time, and it wouldn’t be safe to do that,” Easton said.

While concerns have been expressed on social media by construction workers reluctant to go to work for fear of getting sick, most want to work because they need their paychecks, Finn said.

Nor’wood and other contractors have developed new procedures to keep workers socially distant as they work.

At The Mae at Cascade, for example, an electrician could be installing light fixtures in one unit while a painter works in a different unit and a carpenter does trim work in a third. Nor’wood also is making sure that employees don’t congregate on breaks.

The new protocols have taken a little getting used to, but Finn said the construction industry is used to making adjustments to events that aren’t strictly under their control.

Companies like Nor’wood are concerned about how the industry will sustain itself during a long-term shutdown, but they are also looking ahead to the post-COVID future.

“There is going to be loss and tragedy economically with our businesses,” Finn said. “But I feel like we have to start talking about hope and what is the picture that we want on the other side. We’re still the same community; we’re still filled with the same spirit and the same people; we’re still blessed with the same natural resources that we were before all this. I think we’re pretty dexterous.”