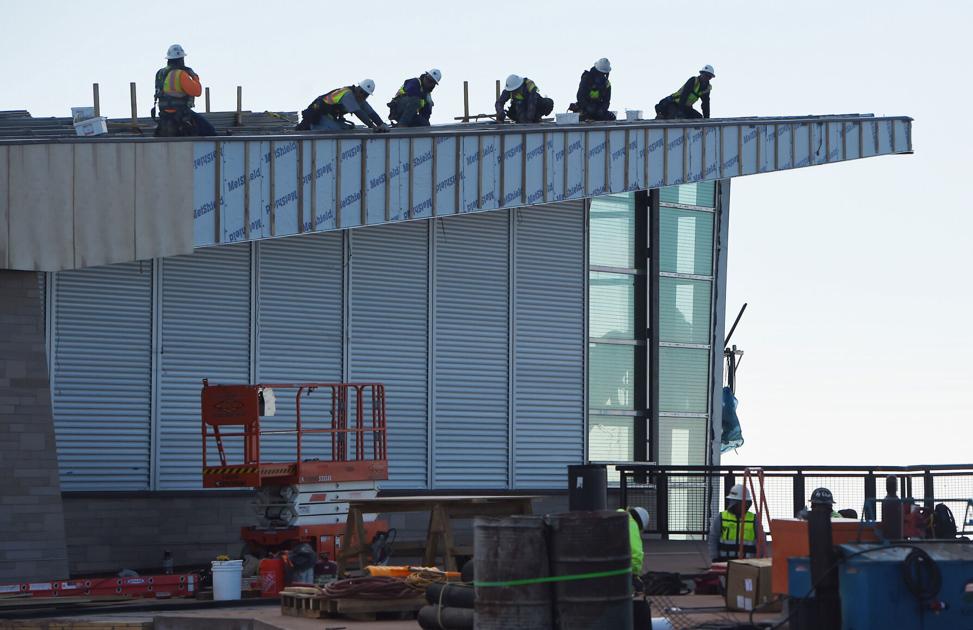 “There’s a lot going on and I think it’s going to be a little while until the peak is as organized as we want it to be,” Alan Reed, principal with GWWO Architects, said. “The grand opening is the 30th. We’re hoping we’ll make that deadline.”

Weather set back construction on the peak by at least 30 days during the last three months of construction, Rob Clough, the project manager with GE Johnson Construction Co., said.

“Weather has just been very tough on construction, especially as we wrap up the site work,” Clough said. “We were hopeful for an early spring, but Mother Nature had another plan for us.”

Trucks and massive digging machinery rolled over uneven gravel through the summit complex near the north side, where metal platforms formed walkways around the edge of the peak, which led to outcroppings and overlooks with breathtaking views.

The summit will be accessible to those with disabilities, Clough said, “so now people who may not have been able to access, say, this boulder field … now have the ability to walk through here and experience a different piece of Pikes Peak.”

As workers bustled around wearing hard hats and neon orange vests, a train load of passengers filed out of The Broadmoor Manitou and Pikes Peak Cog Railway cars onto the platform.

Inside the summit house sparks flew as workers welded metal, stood on ladders adjusting ceiling fixtures and knelt under bathroom sinks with wrenches in hand.

The interior of the building includes ceiling-to-floor glass windows overlooking the view, a dining area that serves the mountain’s iconic doughnuts, a museum-like room filed with a 3D model maps of the mountain, a timeline of its exploration and factoids about oxygen at 14,115 feet above sea level.

But piles of tools, blueprints, ladders and other equipment littered much of the space. Exterior work is expected to last through September, a Colorado Springs news release said.

“I think construction has been a challenge all the way through,” Reed said. “But again it’s going to be a wonderful outcome when we’re done.”