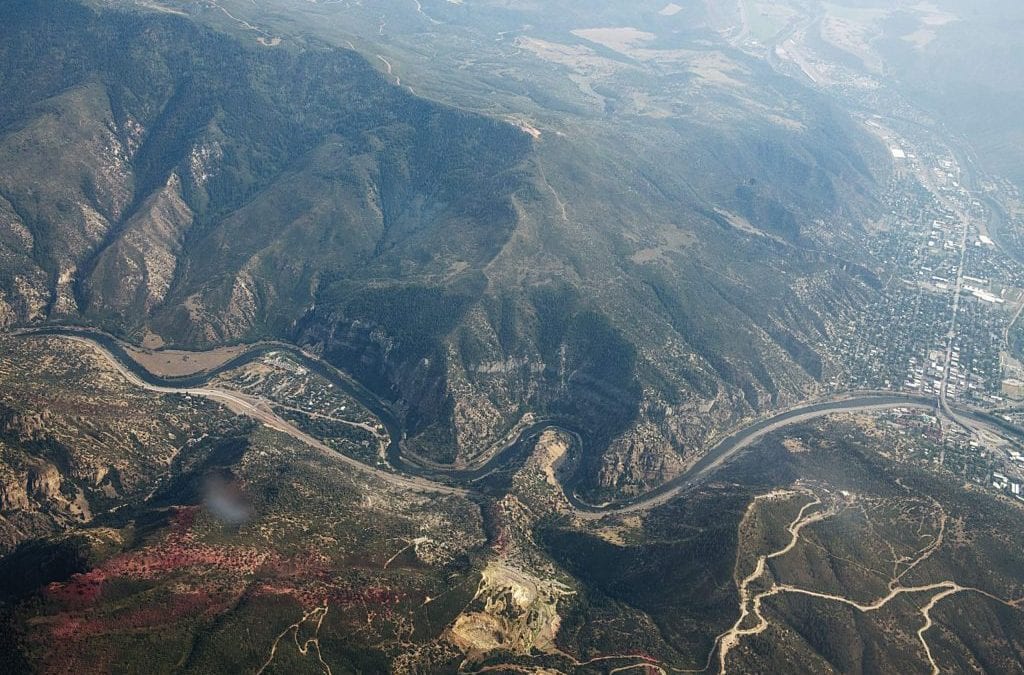 The Grizzly Creek Fire in Glenwood Canyon has many people praying for rain. But the very thing that could douse the blaze, which has burned 32,000 acres as of Tuesday, has some experts concerned it also could create problems for downstream endangered fish.

A heavy rain could wash dirt — no longer held in place by charred vegetation — and ash from the steep canyons and gullies of the burn area into the Colorado River. Scorched soils don’t absorb water as well, increasing the magnitude of the flood. And the heavy sediment load in the runoff could suffocate fish. A similar scenario played out in 2018 when thousands of fish were killed by ash and dirt that washed into the Animas River from the 416 Fire burn area.

“Yes, we are very concerned about a fire in that kind of terrain that close to critical habitat. There’s just no question,” said Tom Chart, director of the U.S. Fish & Wildlife Service’s Upper Colorado River Endangered Fish Recovery Program. “There’s a probability we could have an effect all the way down into the 15-mile reach.”

Between these diversions and the confluence of the Gunnison River is a problem spot where water managers constantly work to bolster water levels through upstream reservoir releases. According to Chart, there is currently a total of about 250 cubic feet per second being released from Ruedi, Wolford and Granby reservoirs for the benefit of fish in the 15-mile reach.

With hot, dry weather, a weak monsoon season and the ongoing diversions for irrigation season, which continue into the fall, current river conditions are already stressful for the fish, Chart said. Water managers say they have seen fish using fish ladders to swim upstream and downstream of the 15-mile reach in search of deeper, cooler water.

“As far as concern about the ecological health of the 15-mile reach right now, we are very concerned about conditions there right now,” Chart said. “Native fish do move out of those dewatered stretches in search of better conditions.”

A debris flow on top of these already-challenging conditions could be devastating for fish populations.

“The potential with the Grizzly Creek Fire could be as bad as it gets if we get a rainstorm on top of a low baseflow,” Chart said. “You pray for rain, but at the same time this would be a tough time to get a flow of ash and retardant off the burned area.”

The U.S. Forest Service’s Burned Area Emergency Response team has done a preliminary assessment of the severity of the soil burns to determine where debris flows would most likely occur, according to Lisa Stoeffler, deputy forest supervisor for the White River National Forest.

Areas of concern include Dead Horse Creek, Cinnamon Creek and No Name Creek, among others. More than an inch of rain in an hour — or a quarter-inch in 15 minutes, as occurs in a fast-moving thunderstorm — could trigger a debris flow, the BAER team found.

But this initial assessment, Stoeffler said, is mostly focused on potential impacts to Interstate 70, and water and power infrastructure, not on impacts to the aquatic environment.

“We may look at environment later on, once we have a final footprint of the fire,” she said. “The BAER process is really looking at things that we would need to address because it would cause an emergency-type situation.”

When the Grizzly Creek Fire first broke out, the city of Glenwood Springs switched its municipal water source from Grizzly and No Name creeks, which are near the burned area, to the Roaring Fork River.

“We are concerned about the ash and debris entering the water system and the costs we are going to incur because of this,” said Hannah Klausman, public information officer for Glenwood Springs.

Since preventing the dirty runoff from reaching the river would be difficult, if not impossible, in the steep, rocky terrain, the best bet, Chart said, would be tapping into upstream reservoir water to flush sediment and ash.

In other words: The solution to pollution is dilution.

The Roaring Fork River, which flows into the Colorado at Glenwood Springs, also would help dilute the ash and sediment before it got to the 15-mile reach. Some of it would probably settle out before it got there anyway. But that would do little to help native fish populations closer to the burn area. Although not listed as endangered, other species such as flannelmouth sucker, bluehead sucker and roundtail chub also could be impacted.

“We get concerned about the endangered fish the most, but it’s really the entire native fish community we need to be paying attention to,” Chart said.

The Colorado River Water Conservation District has some water in Wolford and Ruedi reservoirs that could potentially be used for a flushing flow. But it would take careful coordination between reservoir operators. And it could be a complicated juggling act to figure out how to accommodate all the different demands for that limited water supply, said River District chief engineer John Currier.

“I think we stand ready to try and figure out how to do something,” Currier said. “It will be a topic of discussion sooner rather than later.”

Managing the impacts of the burned landscape on the fish will be ongoing long after the fire is extinguished.

“I think this is going to be an issue for years to come,” Chart said. “That landscape is going to take a long time to heal.”

Aspen Journalism is a local, nonprofit, investigative news organization covering water and rivers in collaboration with The Aspen Times and other Swift Communications newspapers. For more, go to aspenjournalism.org.