Colorado’s young voters turned out in record numbers, largest in the state 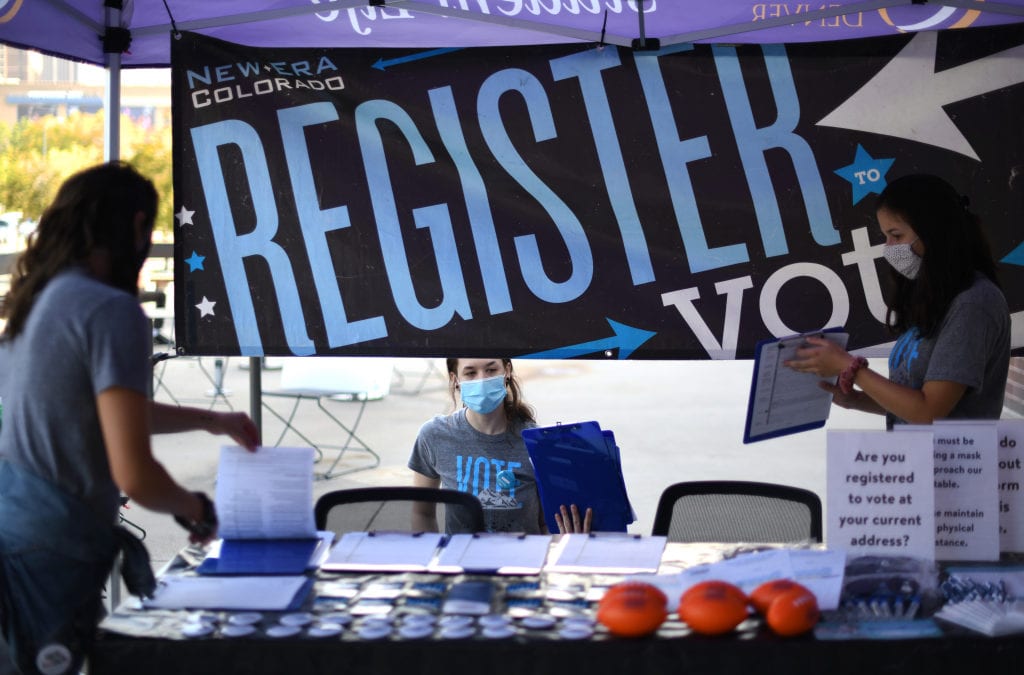 When 18-year-old Apshara Siwakoti cast her ballot on Nov. 3, she felt a sense of relief. Up until the day before, she didn’t think she could vote.

Siwakoti immigrated with her family to the United States at the age of 8 after leaving a refugee camp in Nepal. She became a naturalized citizen in 2018 when her mother obtained her citizenship.

But Siwakoti was still waiting for the paperwork, even though it had been approved. And she thought — and was incorrectly informed — she would need it to vote. On Nov. 2, she received a phone call from a campaign telling her she was registered.

Colorado’s youth turned out to vote in record numbers this year, and at one of the highest rates in the country. Nationwide, young voters — particularly those of color — fueled President-elect Joe Biden’s path to victory, according to early research from Tufts University’s Center for Information and Research on Civic Learning and Engagement. Experts credit a variety of factors for the high level of engagement, including targeted turnout efforts.

In Colorado, voter turnout increased across the board this year, but the level of enthusiasm was most apparent in younger voters, said Robert Preuhs, a political science professor at Metropolitan State University.

“For the most part, what we saw is a relatively energized youth vote and the benefit of this is actually going forward in that one of the key predictors of voting is whether you voted in the past or whether folks have established a habit early on,” he said.

About 70% of registered 18- to 34-year-old Coloradans cast ballots in the 2020 election, a 9 percentage point increase from 2016, when turnout was 61%, according to New Era Colorado, the largest young voter registration organization in the state. The nonprofit advocates for progressive policies.

Their share of the vote was 27% of all ballots cast, cementing them as the largest voting bloc in the state, said Nicole Hensel, executive director of New Era Colorado.

Hensel wasn’t surprised. The state saw record youth turnout in 2018, and young people, particularly Black activists, led the police reform and racial justice protests that sprang up in Colorado and across the country after George Floyd’s killing in May.

Both Democratic and Republican campaigns worked to engage younger voters in Colorado, particularly on college campuses, but only a third of voters ages 18 to 29 cast ballots for President Donald Trump, according to Tufts’ data from Nov. 6.

Preuhs said some of the young vote that went to Biden was probably carryover from their excitement about Bernie Sanders.

And, as with other demographic groups, an urgency to vote against Trump affected turnout, Preuhs noted. In 2016, youth and people of color did not turn out in the numbers Democrats expected, so they tried to make a more concerted effort to reach them in 2020.

Asian-American youth, in particular, showed strong engagement this election, according to the Tufts data.

For Vietnamese American Chloe Nguyen, getting to vote in her first presidential election at 21 helped her feel like she was making her voice heard for herself and her immigrant parents.

“In 2016, it was hard being a bystander because I was just 17 on the brink of turning 18,” the University of Denver student said. “Watching the results, I felt disappointed and I felt terrible knowing that I was only a few months away from my 18th birthday and I couldn’t do anything.”

Volunteers with the Colorado Immigrant Rights Coalition Action Fund talked to 186,000 voters this election cycle and reached another 458,000 through digital ads. They were mostly young voters of color.

“I knew that when I joined this campaign, I wanted to do everything that I could to think about how are people reaching out to me and my peers and how can I work off of that and make this campaign more successful,” said 26-year-old Ian Pham, communications and development manager.

Pham believes young people aren’t contacted enough, and there were a lot of issues that really mattered to immigrant communities on the line this year. Part of CIRC Action’s work is also about ensuring Colorado’s leaders better reflect the communities they serve.

“More and more people are seeing how their vote is just one way to use their voice in this country,” he said.

As other groups were forced to do because of COVID-19, New Era Colorado switched many of its efforts online. While that limited voter outreach, it helped groups meet Generation Z and younger millennials where they were at: on social media.

The Colorado Votes Act, passed by Democratic lawmakers last year, also added voting centers and drop boxes at every college campus, expanded voting in primaries to 17-year-olds who would be 18 by the time of the general election and increased voting access on tribal lands.

“We love to see record youth turnout and what we hope that translates into is a mandate for centering a youth agenda in the minds of our elected officials,” Hensel said.

But that work has to go beyond Election Day, organizers say. Research shows that people who vote in the first three elections they’re eligible to vote in will likely vote for the rest of their lives.

“Voting is something that takes practice in order for it to become habit,” Hensel said.

Eighteen of Colorado’s college campuses have taken part in the ALL IN Campus Democracy Challenge to encourage that habit, joining more than 800 others across the country. Metro State received an award in 2016 for having the highest undergraduate student voting rate: 65.3%. In 2018, the university was recognized for having the highest voting rate among large four-year public institutions: 65.9%.

Ryan Drysdale, assistant director of the challenge, credits the university’s work on voter engagement outside of election seasons.

“The excitement we saw in 2018 and 2020 may dissipate in the future,” Drysdale said. “When that current events variable diminishes, the work campuses do year-round needs to be strong to make sure turnout remains high.”

Doing that is less challenging in Colorado, Drysdale said, because it’s so easy to register and vote in the state. That also means advocacy groups can focus their efforts on educating voters about the candidates and the issues.

That’s the experience Mayra Valdez, a 22-year-old senior at MSU, had as she helped others register and learn about the election. She’s part of IGNITE, an organization that encourages women to become politically engaged.

Valdez, a DACA recipient, isn’t eligible to vote herself, but she made it her mission to help others, particularly voters of color. Young people were motivated this year, she said.

“I think they finally realized we have the power to dictate the direction this country goes to,” she said.