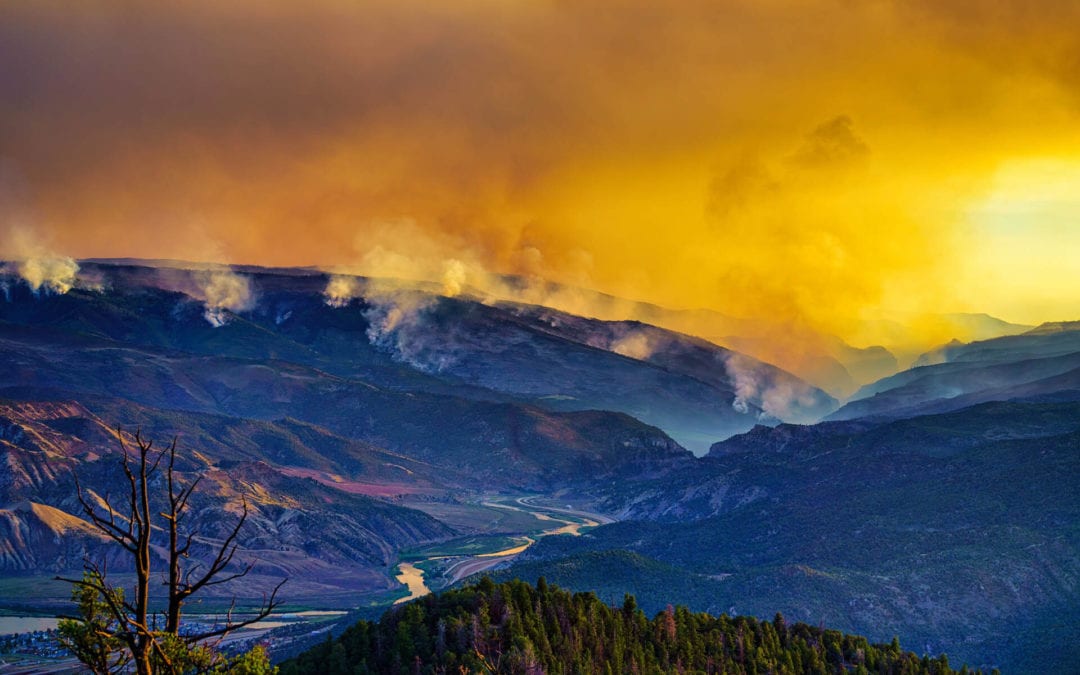 On August 27, the Pine Gulch Fire became the largest wildfire in Colorado’s history. It started from a lightning strike on July 31, and over the course of a month, it had burned more than 130,000 acres in the western part of the state. The blaze hasn’t claimed any lives, but it blanketed the surrounding area in smoke, including the nearby Palisade wine region, where two-thirds of Colorado’s vineyards and a quarter of the state’s wineries are located.

Kaibab Sauvage, the owner of Colorado Vineyard Specialists and Sauvage Spectrum in Grand Valley, described the worst weeks of the fire as feeling like, “you’re in a campfire. It was dropping ash out of the sky and onto the vines,” Sauvage says. “Literally ash on the grapes and on the leaves.”

Sauvage and his team harvested Marquette grapes in mid-August when the smoke from the fires was near its worst and he recalls shaking the ash off the plants.

Bruce Talbott, of Talbott Farms in Palisade, also saw a dusting of ash on the vineyards. He noticed a significant level of smoke haze for about a week, “and if you smelled inside the vineyard canopy, you could pick up a smoke smell for a few days,” he says.

This level of wildfire smoke isn’t normal for Colorado’s winemakers. Smoke taint is the biggest concern for the grapes, says Miranda Ulmer, a viticulture extension specialist with Colorado State University. You can wash the ash off berries, but that doesn’t stop volatile phenols in the smoke from binding to the grape’s sugars. The grapes are most susceptible near harvest, which typically spans from September through October in Colorado.

“[We’re] trying to keep an eye on the visibility, because that can give us an idea of how much smoke we’re dealing with,” says Ulmer. “The figure I’ve seen is that if the visibility is higher than 10 to 15 kilometers (about six to nine miles), then there’s not too much concern. But there have been some days where you couldn’t see a mile down the road.”

In addition to rinsing the grapes and leaves, wineries also had to watch out for watering too much to keep the plants from being shocked by a change in the pH level from the ash.

But it’s not just the grapes that are affected. Talbott says that workers—especially those with respiratory issues—struggled with the poor air quality day and night.

Colorado’s wineries were already facing a tough year after on-premise consumption was shut down in March due to COVID-19. In addition to poor air quality and possibly affected grapes, the Grizzly Creek Fire farther east, which started in early August, was raging at the same time as the Pine Gulch Fire. The former shut down I-70, throttling the main entry to Colorado wine country from Denver and the eastern half of the state.

There’s significantly less research on how wildfire smoke influences than there is for wine grapes, but Colorado’s fires have also impacted its outdoor cannabis farms. Airborne toxins from man-made structures that catch fire pose a risk if those toxins land on cannabis’ flowers. Additionally, much of Colorado’s outdoor cannabis is grown around Pueblo, which is much farther than Colorado’s primary wine region from the epicenter of the fire and smoke.

Shawn Honaker, the founder of Yeti Farms in Pueblo, Colorado, says this is the second time he’s had to deal with fires. The first was in 2017, when flames were mere miles from his farm. This year wasn’t such a close call. As a business that primarily sells concentrates, he has found the ash and smoke doesn’t degrade the product, though the smoke did shade his plants from the intense ultraviolet rays of the summer sun.

The biggest problem for outdoor cannabis farms is the health of the workers. One of Honaker’s employees has asthma, and the smoke reached a point where he had to stay home because it was hard for him to breathe in the field as well as inside with the air conditioner going.

The cannabis harvest is typically in September before the first frost, so fortunately workers at Yeti Farms and others were spared from having to harvest outdoors during the smokiest days. The tightly controlled environment of indoor farms, where much of Colorado’s cannabis is grown, protects from the worst effects of smoke.

Thankfully, the worst of Colorado’s August fires seems to have passed. The first grape data that Talbott and Sauvage received from the lab showed no to low risk of smoke taint. They’ve submitted further samples, as have other wineries, to learn more. Still, the risks aren’t over just because the worst of the fires are.

“We are entirely dependent on irrigation from the Colorado River as our water source,” says Talbott. “We are concerned that when we get the first thunderstorms in the burn areas, which are part of our watershed, that we will have extensive amounts of mud and ash coming down the river. We will have to shut off all our irrigation systems and wait for the river to clear up. We will likely shut off preemptively if those conditions become likely.”

By the end of August, the Pine Gulch Fire was more than 75% contained.

“I think at a light level, the smoke is part of the terroir,” says Sauvage. “The time and place when these grapes were grown and the conditions they were subjected to—the wildfire was definitely part of that. But at a higher level it becomes a flaw, and that’s the problem.”

Ulmer and CSU’s research viticulture specialist, Horst Caspari, are working with wineries to collect as much data as possible to better understand what the impact of this and future fires will be.

“We have a really different climate than all the other growing regions that are experiencing fires, such as Australia and California,” says Ulmer, “so it’ll be interesting to see how smoke taint acts in our really hot, dry climate.”