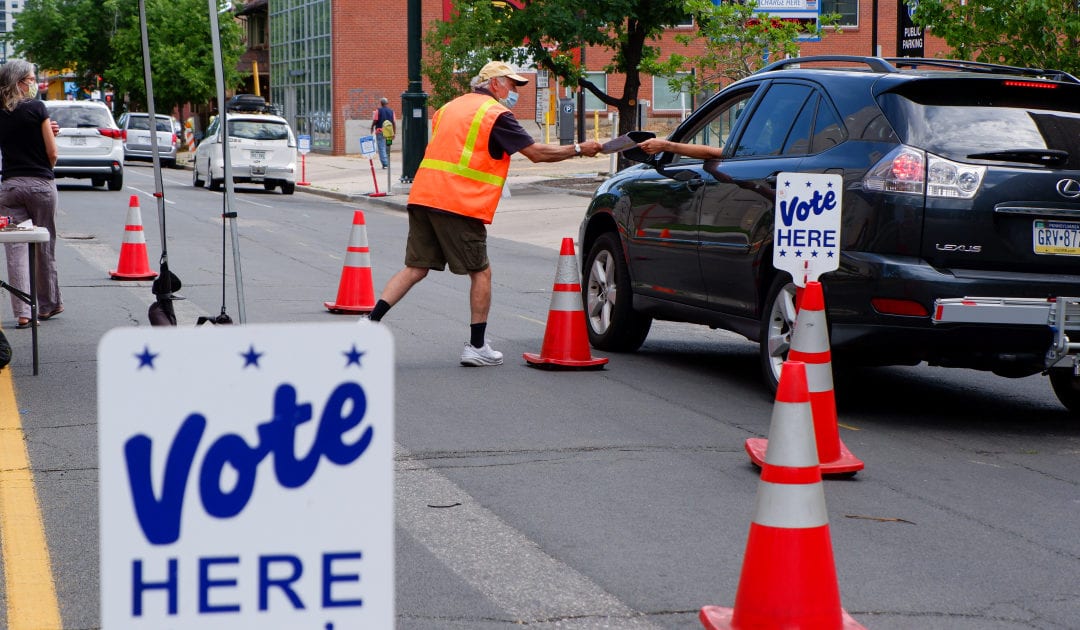 Colorado Secretary of State Jena Griswold on Saturday sued the U.S. Postal Service, accusing the agency of attempting voter suppression through an informational postcard it’s sending to voters about how to cast their ballots through the mail.

Griswold, a Democrat, says the postcard presents false information in the four bullet points included on the flyer, including telling Colorado voters they must request a mail-in ballot.

That’s not the case. Under Colorado’s universal mail-in ballot system, every registered voter receives a ballot in the mail. There is no need to request a ballot.

“These false statements will confuse Colorado voters, likely causing otherwise-eligible voters to wrongly believe that they may not participate in the upcoming election,” the lawsuit says. “This attempt at voter suppression violates the United States Constitution and federal statutes and must be stopped immediately.”

The legal action, filed in federal court, asks that the Postal Service be barred from continuing to deliver the postcards to Colorado voters. It lists Louis DeJoy, the controversial Postmaster General appointed by President Donald Trump, and the regional postmasters for Denver and Albuquerque, as defendants. (Mail delivered to the Four Corners region of Colorado is routed through Albuquerque.)

Some of the postcards have already been received by Colorado voters, including some in Larimer and Denver counties.

In addition to the guidance that Colorado voters must request a mail-in ballot, Griswold’s office also takes issue with a recommendation that voters mail back their ballots at least a week before Election Day. That’s guidance the Secretary of State’s Office normally gives, but Griswold fears it may lead people to believe they must mail their ballot back in.

“Colorado voters do not need to mail their ballot to vote at all. Colorado voters may elect to instead vote in-person, return their voted ballots to voter service polling centers staffed by local election officials, or conveniently located, secure drop -boxes,” the lawsuit says.

The legal action is the latest friction between Colorado elections officials and the Trump administration over mail-in ballots. Trump has baselessly said that mail-in voting in rife with fraud, and anxieties across the nation about potential tampering with voting peaked when DeJoy began implementing changes at the Postal Service that slowed down mail processing and delivery.

Those changes have since been stopped, but Colorado Attorney General Phil Weiser is still suing the agency to reverse any actions taken that may slow down mail service.

Weiser, a Democrat, is representing Griswold in the lawsuit over the informational postcard.

Griswold has become a national defender of vote-by-mail in recent weeks, appearing in national news articles and on television to defend the practice. She recently threatened to refer Trump for prosecution after he appeared to encourage voters in North Carolina to vote twice.

The Postal Service defended the postcard Saturday in a statement to The Colorado Sun, saying that it was intended to clear up any confusion around mail-in voting that people may have.

“Our mail-piece provides general, all-purpose guidance on the use of the mail, and not guidance on state election rules,” James Boxrud, a Postal Service spokesman, said in a written statement.  “The mail-piece – which has already been delivered to most households and will reach every American residential mailing and P.O. Box addresses in the coming week – contains a single set of simple recommendations for voters throughout the nation, regardless of where they live and where they vote.”

Boxrud adde that the Postal Service “recognizes that not every state requires a voter to request a ballot in order to obtain one by mail for the November election.”

The statement from the agency did not say if it notified Colorado elections officials before mailing out the postcard or say why the mailer contains incorrect information.

Ballots will start being mailed to Coloradans on Oct. 9.