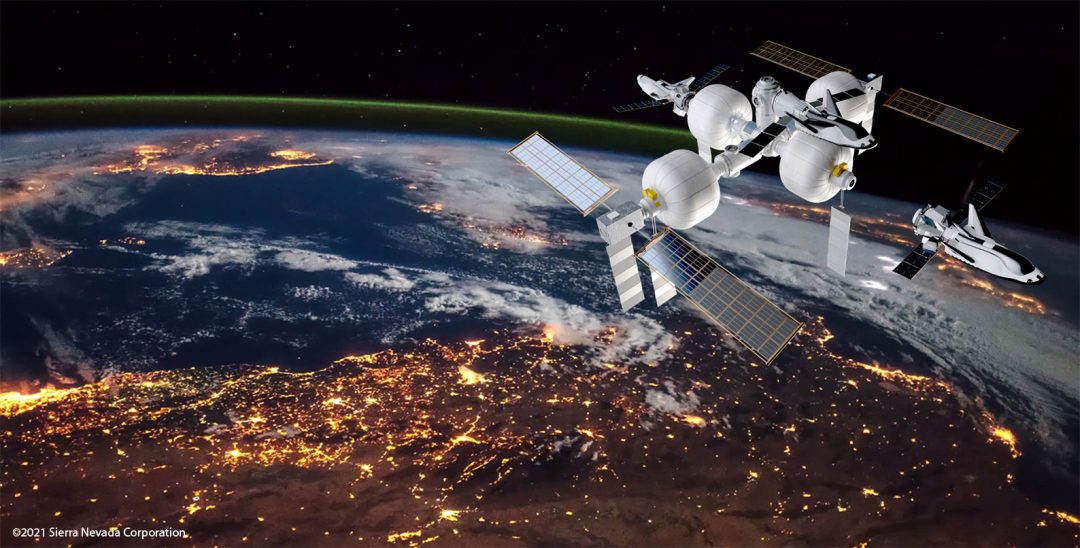 Sierra Nevada Corporation’s Space Systems division has spent years developing habitats for life in Earth’s orbit and the vehicle to get people there. On Wednesday, the aerospace contractor announced plans to put the two together and build a space station.

Sierra Nevada’s station will be a commercial successor to NASA’s soon-to-be retired International Space Station. For its mission, the Louisville-based division is combining its key projects — the Dream Chaser spaceplane and a large, inflatable fabric environment called LIFE. The new facility could open up research, tourism and agriculture, among a host of other extraterrestrial opportunities.

Sierra Nevada hopes to have a full circle launch program that can “take people to the space station, come back… and then land safely on a runway,” said former astronaut Janet Kavandi, the company’s executive vice president.

The Dream Chaser resembles a futuristic space shuttle, but at one-fourth of its size. The spacecraft’s design, manufacturing and assembly takes place in Louisville. It will be launched on the tip of a Vulcan Centaur rocket developed by the Centennial-based United Launch Alliance. The spaceplane itself can be used more than 15 times and is able to land at runways worldwide that are at least 10,000 feet in length.

The LIFE habitat resembles a paper lantern, covered with an outer mesh made of heavy duty materials including Vectran and Kevlar, tough fabrics used in bulletproof vests. The habitat is launched deflated, inside the nose cone of a rocket. After entering Earth’s orbit, the cylindrical capsule is inflated to 27-feet in diameter.

These habitats were originally developed for missions to the moon and Mars. Sierra Nevada has maintained those long-term goals, and will use habitat pods to make the body of the planned space station. The facilities can be constructed for a number of uses and can be joined together. Some spaces are designed for living and work, while others could house research labs or robotics stations.

“And we did that on purpose. We’ve looked at the end users, all the different types of activities we want to take place on this commercial space station,” said Neeraj Gupta, Sierra Nevada’s director of programs.

The company said its space station offers more flexibility compared to the international space station. The Dream Chaser is scheduled for a mission to NASA’s space station in 2022, the craft’s first official flight.

Built in 1998, the international space station was designed for a 15-year life span, but has continued operations with repairs and extensions. Stress cracks from over two decades of orbit will eventually force the aging station to retire. NASA has cleared the station to orbit until 2028.

“Congress may decide when they’re going to stop funding ISS, but the reality of space may decide when ISS really gets retired,” Vice President of Business Development Jon Roth said.

One of these services available in LEO is medical research. On Earth, gravity can be a frustrating variable for researchers. Space’s low-gravity environment makes it easier to study cancer-related cells as they behave in the body. According to Sierra Nevada, the Dream Chaser makes it far easier to retrieve results because of its gentler landing capabilities compared to a traditional space capsule’s reentry to Earth.

Sierra Nevada also sees space tourism on the horizon. After setting up a space station, Sierra Nevada aims to use its Dream Chaser for cargo and crew transports of up to seven people. In the future, it hopes that everyday people can use its developments to experience space themselves.

“Think of us as your space travel agent for the best space experience,” said Eren Ozmen, the company’s chairwoman and president.

Sierra Nevada has even experimented with agriculture in space. LIFE habitats are being developed to grow crops from tomatoes to lettuce, meant to provide future astronauts with a fresher local option.

Colorado is home to the country’s second largest aerospace economy, valued at $15.4 billion by the Colorado Office of Economic Development and International Trade. The Colorado Space Coalition estimates 190,290 Coloradans work in space-related jobs.