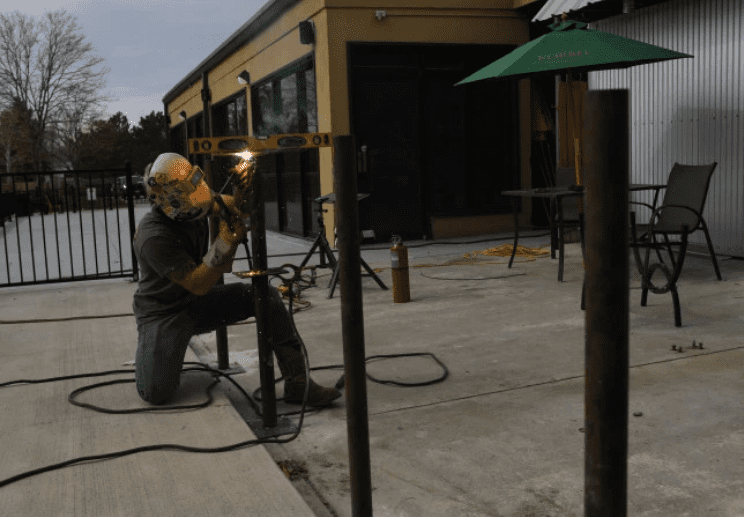 Like many who make a living in Colorado’s oil fields, life has slowed to a crawl for Chris Golding, a mobile welder who makes repairs to rigs and pipelines throughout the oil-rich Denver-Julesburg Basin northeast of Denver.

His productivity has plummeted from a breakneck pace of up to 100 hours of work weekly to perhaps 20 to 30 hours a week.

“I’ve been about trying to seek small jobs to stay afloat,” said Golding, who last week took his metalwork talents to a Greeley restaurant undergoing a renovation. “That’s how I built my business — out on the oil field.”

The state’s petroleum industry employs about 90,000 people, directly and indirectly, generates $13.5 billion in economic activity, and provides $1 billion in taxes to state and local governments, according to an analysis from the University of Colorado Boulder.

Jobs in the oil patch are disappearing amid the double whammy of the coronavirus pandemic and a global oil price war. Weld County produces nearly 9 of every 10 barrels of oil in Colorado, and it’s safe to say there are few here who won’t be touched by the historic crash in energy prices.

For Justin Mapes, a laid-off quality control manager for a bankrupt oil and gas firm, there may be no return to the industry after nine years of making a living that way in Weld County. He lost his job in January as the virus crossed into the United States and the price of oil began teetering.

“It’s scary — I never thought I’d see it this bad in my lifetime,” he said. “It feels surreal.”

Mapes is pivoting away from the oil fields and trying his hand in the screenprinting business. He bought an existing company in Greeley and is trying to make it his own. His wife is working for food delivery service DoorDash to bring in some cash while Mapes tries to get the new enterprise going.

The 37-year-old father of three just bought a house in LaSalle at the end of last year.

“There’s a lot of despair, a lot of fear,” Mapes said. “You get laid off in the oil and gas industry, and you could always find another job. That’s not the case anymore.”

Mapes and Golding are just two of thousands of Colorado oil and gas-related workers who have seen hours cut or been handed the dreaded pink slip. The price of oil has plunged from more than $60 a barrel in the early days of January to $15 a barrel last week, as the coronavirus pandemic has battered air and auto travel and silenced factories around the world.

At the same time, Russia and Saudi Arabia have been locked in a devastating oil price war that helped temporarily drag prices into negative territory in April. Even before prices went subterranean, oil and gas companies had drastically cut spending and let workers go as the world economy started showing signs of slowing even before coronavirus, which causes the respiratory disease COVID-19, appeared in China late last year.

April saw 96% fewer oil and gas permits filed in Colorado — just 21 — compared with April 2019. The number of rigs actively drilling in the state has fallen from 22 at the start of the year to 15 at the end of April, according to energy technology firm Baker-Hughes.

More than 2,000 mining jobs in Colorado — predominantly in oil and gas — have disappeared in the last year. Halliburton, the oilfield services giant, laid off 130 employees in Weld County last month, which came on the heels of a decision by Liberty Oilfield Services to let go 183 workers based in Adams County.

“It’s been a tough year, not just these last few months,” Weld County Commissioner Barbara Kirkmeyer said. “Those are families, those are real people getting laid off and they’re out of jobs.”

The damage isn’t limited to the rig workers, truck drivers and industry executives — ancillary businesses like restaurants and lodging are taking a big hit, too.

Jose Casillas, who owns Mi Gallo Giro in Evans, said his daily orders for burritos have dropped from more than 1,000 to around 600, as energy companies cut back spending and oil field workers are displaced. The big burrito orders for breakfast meetings are dwindling, he said.

“The oil and gas industry is vital to our business,” Casillas said. “We’re busy beyond capacity when they’re busy.”

Casillas had to let a couple of his employees go in recent weeks as volume slowed, but he is surviving on takeout business.

“It’s pretty difficult and it’s harder to operate that way — but we’re operating,” he said.

The hospitality sector in Weld County, where area hotels had for years been filled with oil and gas workers, has been one of the biggest victims of the energy industry’s misfortunes.

“For the past three or four years, every single month we’ve been in the top two or three (spots) in lodging tax” in Colorado, Greeley Mayor John Gates said. “That’s primarily due to oil and gas. You could always tell by driving by our hotels and seeing the predominance of white trucks.”

This time of year, the Homewood Suites by Hilton is usually sold out, said Pam Evans, the hotel’s general manager and operations director.

“In the past five weeks, we’ve been between 20% and 40% occupancy,” she said. “At the beginning of March, we started seeing everything decline. It’s hard to tell if it’s COVID-19 or oil and gas. It all sort of happened at the same time.”

The uncertainty around the industry worries Gates. Although wells are found mainly in the rural parts of Weld County, he said the economic benefits ripple through his city.

The oil and industry is also a huge underwriter of schools and local governments. Reduced production means the property and mineral severance paid by the industry will drop, cascading out across cities, counties and special districts. In 2019, more than half the $890 million in property taxes paid to all government bodies in Weld County came from oil and gas.

“We have about a $400 million budget right now, and we’re talking that we may have to cut a fourth of it next year,” Kirkmeyer said. “We can do that without reducing services because we’ve kept our level of services appropriate with the amount of funds that we bring in and we haven’t over-expanded.”

Because of a lag in when property taxes are paid, Weld County figures its big financial hit will come in 2022.

That will also be the case for school districts in the county. Glenn McClain, superintendent of 1,200-student Platte Valley School District Weld RE-7 in Kersey, said 90% of the district’s budget comes from oil and gas property taxes.

He worries about financial stability going forward because unlike past downturns in the energy sector, this one came with a once-in-a-lifetime global health pandemic attached.

He takes comfort in the four mill levy overrides and bond issues that voters have passed over the last 20 years, giving Platte Valley a $5 million reserve in its general fund. He says that rainy day money “gives us time.”

“But this is about as rainy as it is going to get,” McClain said.

When might the clouds part is a big discussion in Weld County. Rich Werner, president and CEO of Upstate Colorado Economic Development, said in northern Colorado the oil and gas industry accounts for approximately 8% of the workforce.

“There is a tremendous amount of concern regionwide about the industry,” Werner said.

The travails in the oil patch are just starting to bleed down to county social service agencies, which serve the most vulnerable segments of the population. United Way Weld County is concerned that as oil and gas continues to take a body blow, the effects will inevitably trickle down to the charitable organization.

“Oil and gas has been very generous to the nonprofit community,” said Jeannine Truswell, president and CEO of United Way Weld County. “When oil and gas isn’t doing as well, they can’t be as generous.”

The agency launched a Weld Recovers COVID-19 Relief Fund in March and has secured $250,000 in commitments to help support families and children impacted by the downturn and the pandemic. But Truswell said that is less than half of what United Way took in seven years ago during the 2013 floods.

“They just can’t be there — the industry has been impacted,” she said.

At the Weld Food Bank, the number of individuals who came in for food jumped to more than 37,000 in the mid-March to mid-April period, well above the nearly 23,000 people who picked up food during the same period last year, according to Stephanie Gausch, the pantry’s chief development officer.

“We anticipate we’ll maintain that level or increase,” she said. “I couldn’t have imagined such a significant increase. We don’t know what to expect.”

Or just how long the dire situation will continue. Even after the COVID-19 crisis clears, there’s no assurance that commodity prices will regain their luster any time soon.

“We’re not just concerned about the next month, but the next six months,” Gausch said. “It’s not going to only impact drastically the people we’re serving but it’s going to impact our fundraising, too.”

The post Colorado’s oil and gas country – and its people – suffer from twin hits to industry appeared first on Greeley Tribune.