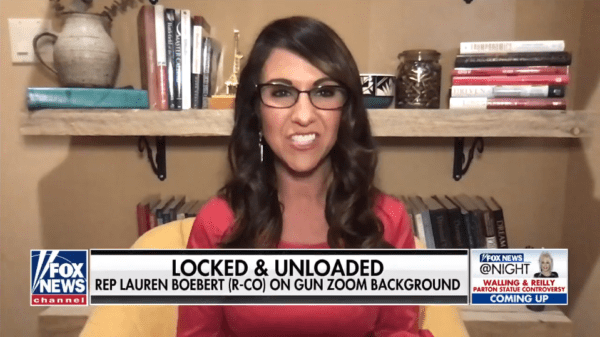 Less than two months into her freshman congressional term, Rep. Lauren Boebert (R-CO3) has become the GOPs newest , whether she’s talking about packing a concealed handgun on Capitol Hill to declaring over the weekend that labeling the fenced-in Capitol building as “Fort Pelosi.”

“Feisty” may not do justice to the 34-year-old first-time politician who won the 2020 primary over an incumbent Republican with a right-tilting campaign message that sold well along Colorado’s entire West Slope. She arrived in Washington, D.C. promising to take on the far-left “Squad” headed by Rep. Alexandria Ocasio-Cortez (D-NY) and she got into trouble Jan. 6 for allegedly trying to help Capitol Hill protesters, which she denies.

She is hardly a fan of the Biden administration, as illustrated by this message on Twitter:

It’s March 1, 2021 and most of us still have no idea who is actually running the Biden White House.

But her willingness to criticize House Speaker Nancy Pelosi for keeping National Guard troopers around the Capitol Hill area, and maintaining the fence has hit some nerves among conservatives. The situation is dripping with irony because the same people who want to keep the capitol fenced in are the ones who hypocritically oppose the continuation of the southern border wall.

Barriers are either good or bad, they cannot be both. If a fence around the Capitol is a good idea, why is a fence along the nation’s southern border a bad idea, many wonder.

Over the weekend at the Conservative Political Action Conference in Orlando, Boebert sat on a panel, where she said it would not be surprising if soldiers were suddenly quartered in committee hearing rooms inside the House and Senate buildings. Pelosi and other Democrats evidently do not want to lose the security barrier, but the New York Post reported over the weekend “A growing number of lawmakers have begun to question the optics of the continued security measures.”

Meanwhile, she was quoted by when she tweeted Sunday that she was looking forward to an appearance by former President Donald Trump as delivering a “State of the Union” address.

The Democrats blew their chance at “unity” by passing the first major piece of Biden legislation on a completely partisan basis. They’ve even brought back earmarks.

In other words, the swamp is back and deeper than ever before.

Boebert first made a name for herself as the proprietor of a restaurant in her hometown of Rifle, in northwest Colorado, where the waitresses carried sidearms openly. Two years ago, she raised her profile even more by driving for about three hours across the Rockies to eastern Colorado just to confront then-presidential candidate Robert Francis “Beto” O’Rourke to simply tell him “Hell, no, you’re not taking our guns.”

She also tweeted about the necessity of electing more “America First Republicans” in order to protect the Second Amendment.

Democrats are poised to attack the right to keep and bear arms, and the country appears to be waiting for Joe Biden to announce his promised gun control scheme.

If you haven’t checked out and liked our Facebook page, please go here and do so.  You can also follow us on Twitter at @co_firing_line and be sure to check out our MeWe page here and our new PatrioticSpace group here.

If you appreciate independent conservative reports like this, please go here and support us on Patreon.

And while you’re at it, be sure to check out our friends at Whatfinger News, the Internet’s conservative front-page founded by ex-military!