Colorado’s latest proposal to divert water from the Western Slope is a complex, disputed set of pipes 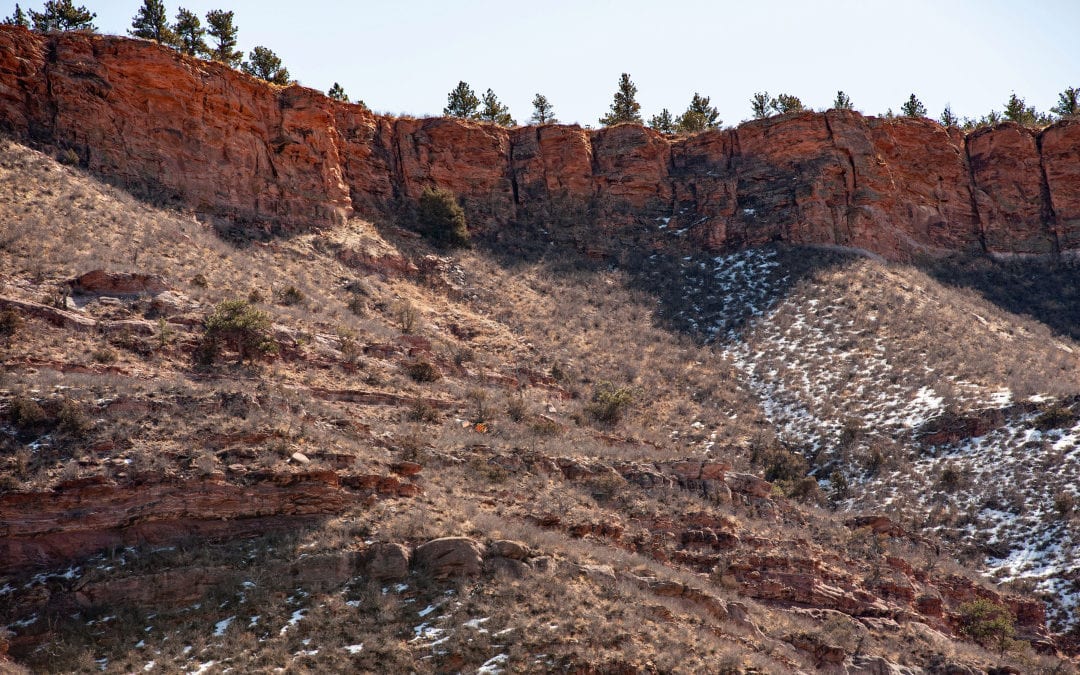 CHIMNEY HOLLOW — Sometime in the middle of next year, if Northern Water gets its way, the bulldozers will start piling earth and rock 25 stories high to plug this dry basin southwest of Loveland forever.

Four miles to the south, they’ll build another dam to keep their newly-made bathtub from leaking out the back toward Lyons. Drill crews will bore a massive pipeline through the hogback making up the east edge of the bathtub, in order to feed Carter Lake a few hundred yards to the east.

Then the hard part begins.

To fill this new water bucket, enough snow must fall on the west side of Rocky Mountain National Park, 50 miles away, to first fill Lake Granby and give those holding more senior water rights their due. Water left over for Northern, paid for in the 1980s, would then spill into the Colorado River. Then into Northern Water’s Windy Gap Reservoir, which infuriated Grand County anglers when it dammed their sacred stretch of the Colorado in 1985.

Then the water would get pumped back uphill to Lake Granby, into Shadow Mountain Reservoir, and finally flow into Grand Lake. There it would drain into the 13-mile Alva B. Adams Tunnel carved under the Continental Divide. The newly-captured water would spill out of that tunnel and through three more lakes of the Colorado-Big Thompson pipeline and a couple of hydropower plants on the way downhill to hundreds of thousands of Front Range water taps.

Finally, the Western Slope water would squeeze through a valve house and start filling Chimney Hollow.

In the meantime, back in Grand County, Northern Water would have dug a whole new channel for the Colorado River, around Windy Gap, to let the fish and their food of choice flow free once again. Only this river restoration will land the support of those same furious anglers, part of a project they acknowledge is a devil’s bargain.

Buying water bound for Glenwood Canyon and the Grand Canyon, and sending it toward Greeley, to water suburban lawn grass and dry Plains farms in between, is a lot of work. Colorado’s environmental community might be forgiven for thinking water engineers had given up on this level of God-play three decades ago.

The entire project, which actually constitutes the smaller of two river system overhauls Northern Water hopes to launch by next year, “will only spur growth and feed the unsustainable system of water use and development we are addicted to in the West,” said Jen Pelz, Wild Rivers Program Director for WildEarth Guardians, part of a coalition suing to block the dams.

“Ecosystem collapse, extinction of native species, and sacrifice in quality of life for both people and the environment is on the horizon if we don’t stop the madness and find a new path forward,” Pelz said.

Northern Water is a faucet tapped by more than 1 million residents across eight northeastern counties. The provider and its 17 member cities say they need to divert the Colorado River water to Chimney Hollow, and Cache la Poudre water at two other controversial reservoirs, to supply burgeoning housing subdivisions and growing industry. They say conservation in the form of low-flow toilets, dry landscaping, and recycling, has reached its limits. The only other alternative, they say, is buying up more agricultural water and ending farming as a Colorado way of life.

“We recognize that this is a pretty complex mechanism for how we deal with water in Colorado,” Northern Water spokesman Jeff Stahla said, standing near a dry stream bed that will be 200 feet underwater if the dam gets built. “And it’s unlike other parts of the country where you have to worry about too much water and get rid of it. We recognize we need to hold on to every drop we can.”

Northern Water’s opponents respond that Chimney Hollow and its proposed dam siblings are examples of the kind of destructive water projects that more progressive providers gave up in 1990, when the EPA stunned the West by vetoing Denver Water’s long-planned Two Forks Dam on the South Platte.

Northern Water should have learned long before now, said noted nature photographer and open rivers proponent John Fielder, that “nature manages us, not the other way around.”

Even Denver Water has moved on from massive new water basins, calling the Two Forks trauma its “crucible” that forever changed how it looks at dams and water diversions. Denver’s biggest storage project now is expanding existing Gross Reservoir by raising the dam, the main Two Forks alternative backed at the time by Trout Unlimited and other environmental groups.

Northern Water has been looking for a place to move more Grand County water since it closed the gates on Windy Gap Reservoir in 1985. They jumped on the opportunity to buy Chimney Hollow when Hewlett Packard, then a major northern Colorado employer, gave up on the idea of using the former ranch’s quiet slopes as a corporate retreat.

Decades of planning, persuasion and paperwork on environmental impacts resulted in final building approval from the U.S. Army Corps of Engineers in 2017. Save the Colorado, an offshoot of Save the Poudre that has been fighting the dams farther north for years, joined with WildEarth Guardians and others to sue, delaying Chimney Hollow years longer.

A federal judge ruled against the opponents in December, saying the environmental studies were enough and the dam could go ahead. Fire up the bulldozers? No. The coalition immediately went to the 10th U.S. Circuit Court of Appeals. There it sits. Northern Water first started applying for Chimney Hollow permits in 2003.

Northern Water has sought reservoirs for the Cache la Poudre since the late 1980s, and the formal permitting applications for NISP began in 2004. Northern Water could receive a U.S. Army Corps permit this year, which environmental groups will likely challenge in federal court.

Those groups are also suing the Larimer County Commissioners for their approval of a separate construction permit for Glade. If work starts later this year, NISP may be completed by 2029. Water officials are lucky to finish a dam within three decades of starting.

To sell new dams to a skeptical public, water developers lean heavily on mitigating collateral damages large and small. Looking up-valley from the spot where the massive Chimney Hollow dam abutments will be built, Stahla points to an area where the former volcanic rock of the Rockies meets the sediment that used to be the inland ocean covering Colorado. That geologic crossroads makes for a good quarry. Northern Water will move stone from there right down the dry creek bed to build the dam, saving thousands of loud truck trips through surrounding subdivisions.

A far larger mitigation took a decade of negotiations with Grand County, over the divide.

Trout Unlimited’s Headwaters chapter first opposed Chimney Hollow, since it would pull yet more water out of the Colorado. Members were still furious about Windy Gap ruining one of the best fishing stretches in America. It blocks the flow of trout and their winged food in both directions, and Northern Water even keeps a fence around it so no one can use the pool for recreation.

“It took us 10 years to convince them the river biomass is crashing,” said Kirk Klancke, president of the headwaters chapter. Eventually Northern Water agreed to rebuild the river channel around the Windy Gap dam if Trout Unlimited and Grand County officials would sign on.

“The ‘devil’ has doubled the money they committed,” he said. “The Colorado is dying, and the only way we’re going to save it is to work with the people who are creating the biggest impact.”

The opponents who are suing Northern Water decline that bargain, saying the Front Range is draining the Colorado River and its tributaries of the majority of their west-flowing water. Building a new drainage ditch around Windy Gap is not restoring wildlife — it’s just more of the same developer mentality that “turned rivers into plumbing systems,” Fielder said.

When dam-and-divert critics list water projects as another example of a pave-the-earth mentality that has led to global warming, Northern Water cites other impacts of global warming that their dam projects would actually improve. The record-breaking, drought-driven wildfires in northern Colorado last year disrupted forests and will send tainted water into the plumbing, Stahla said. Fort Collins breweries had to rely on reserve water instead of Northern Water plumbing after past wildfire runoff upstream threatened to make their beer taste like smoke.

If Chimney Hollow existed now, Stahla said, the reservoir would have stored clean water and the system could send water tainted by the East Troublesome fire on down the river for nature to purify, bypassing the beer makers.

“It would have given the Front Range a little more resilience,” Stahla said.

Dam opponents scoff at the idea that more engineering can make up for the hundreds of years of over-engineering draining the life from Colorado’s river network. And it’s not just Northern Water among the developers that deserve scorn, said Gary Wockner, whose Save the Poudre and Save the Colorado nonprofits help lead the battle against the dams. Denver Water shouldn’t be patted on the back for expanding Gross Reservoir in Boulder County, since it would divert more Fraser River water from the Western Slope into metro Denver houses, he said.