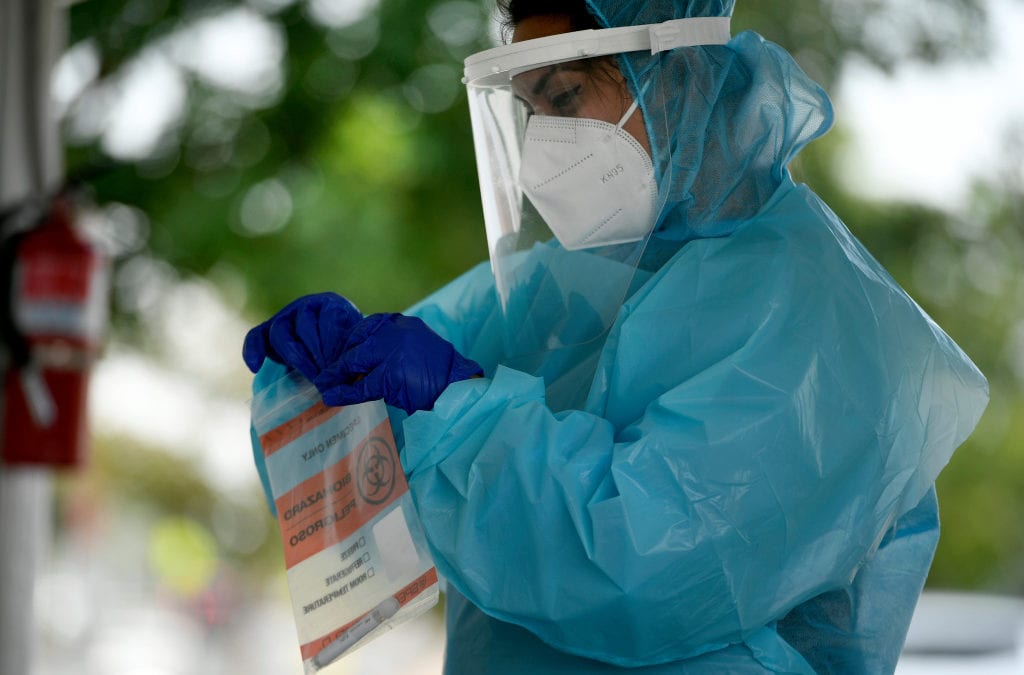 Colorado’s COVID-19 restriction dial is designed to be data-driven and binary. If a county crosses certain thresholds that indicate worsening spread of the coronavirus, tougher restrictions follow via an order from the state.

But data and interviews with county health officials and political leaders throughout Colorado reveal that the dial system turns out to be highly fungible, delivering citizens and businesses a patchwork of regulations informed partly by data and partly by politics.

A person can run errands in two counties with roughly similar virus metrics and expect different levels of protection because of differences in relationships between the state and local officials in those counties. The rules are different not only for retailers but for other businesses, schools and private gatherings.

That means they must suspend in-person dining and heavily restrict capacity inside offices and gyms, among a slew of other requirements.

The revision of the dial to create Level Red was itself indication of the elasticity of the rules: If the state had strictly followed the dial in recent weeks, many counties would already be under stay-at-home orders. By revising the dial, the state protected counties from a full lockdown.

Ray Beck, a county commissioner in Moffat County in northwest Colorado, said that hours before those 15 counties were named, his commission spoke with the staff of Gov. Jared Polis. He described it as a positive, collaborative interaction.

“The governor’s office was encouraging us to go to red,” he said. “I asked if we could go to orange (the level below red) instead, because red pretty much shuts us down. They said, ‘Yeah, that’s an option.’”

Moffat borders Routt County, and the state’s COVID dial site shows that the two are at roughly equal levels on the three indicators the dial relies upon: incidence of new COVID cases, percentage of positive results over 14 days and hospitalization rate over 14 days.

Routt’s moving up to red, and Moffat isn’t.

Said Routt County Commissioner Beth Melton, “I don’t think there’s much about this pandemic response that hasn’t been influenced by politics in some way.

“My experience and the conversations I’ve had with the state are that they believe — and I think understand, rightfully so — that if there’s a situation where local elected officials disagree with what they have done, that puts them in a situation where the measures taken are not going to be as effective,” she said.

“I can appreciate their efforts to have these decisions to be collaborative with the counties,” Melton said, but added, “a piecemeal or patchwork kind of approach to this is unlikely to be effective, and I think it’s critical that the state move those conversations forward as quickly as they can.”

Last week, the Greeley Tribune detailed a call between state officials including Polis and Weld County commissioners. If the director of the Colorado Department of Public Health & Environment directed Weld to move up the dial, one commissioner reportedly said after the call, “Tell her no.”

Weld County was not among the first 15 counties moving to Level Red, even though it’s in the red zone on two of the three dial indicators. Boulder, Broomfield, Clear Creek, La Plata, Logan, Routt and Summit counties were in the first group despite having just one red indicator each.

“I don’t know if there are reasons why, but from what I’ve heard, it sounds political,” she said. “It’s very frustrating for us at a local level for things to not be applied equally. When we have someone in another county saying, ‘Well, I don’t have to do it, it’s really, really difficult for us.”

The upshot of a patchwork approach, Goussetis added, “is increased transmission, of course.”

“We’re very concerned about neighboring counties not having the same rules. It doesn’t work if we don’t all do it,” she said.

The Colorado Department of Public Health & Environment’s communication office did not grant The Denver Post an interview for this story. But in an email statement, it indicated movement on the dial can be subject to negotiation, not just data.

“We are still in talks with several counties regarding where they fall on the dial,” the email stated.

Polis has not addressed the discrepancies in how the dial is applied. What use is the dial if the state doesn’t enforce it consistently, The Denver Post asked him in an interview last week. He did not directly answer the question, instead discussing various precautions he hopes citizens take to protect themselves and others.

Pueblo County was not among the 15 named Tuesday, but it was one of the counties the state was “in talks” with. The county was one of two in Colorado — Adams being the other — that was in the red zone in all three indicators on the dial as of Thursday.

Asked why Pueblo wasn’t included on the initial list, Sarah Joseph, spokeswoman for the county health department, said, “I don’t think we understand. I was talking to some of my colleagues, other communicators throughout Pueblo County, and we were trying to understand how this works.”

Again, it seems no coincidence that Adams moved up the dial first even though Pueblo’s numbers were similarly high. The Denver metro area counties have mostly been more welcoming of a tougher approach.

“For us, it is clear: We need more restrictions,” said Adams County Commissioner Emma Pinter. “We’re red on all three metrics, and I’m getting constant calls from nurses, folks that work in hospitals, that things are tenuous at best.”

Elisabeth Lawrence, a Summit County commissioner, noted that her county earlier this fall went above and beyond the restrictions the state imposed, limiting gatherings to six people while the state’s recommended number was still at 10. Though she believes bold action is needed now to protect the economy and public health, she said it’s not necessarily a bad thing for the dial to have some flexibility to it, particularly to accommodate counties that have their own, tough regulations in place.

Denver Mayor Michael Hancock went as far last week as to call the dial — pre-revision — “archaic” and not reflective of all that the state and its counties have learned and improved upon since the pandemic began.

But Hancock said he’s also convinced that stricter rules are needed now in Denver, and he joined Polis for a press conference announcing the new Level Red.

Though there are many officials who share Hancock’s general mindset on dial flexibility, there remains significant concern about just how flexible it seems to have gotten.

“The data is there, and that cannot be argued with,” Lawrence said. “But I believe some counties are interested in fighting against that.”