Colorado’s 6th District, once a political battleground, is quiet now 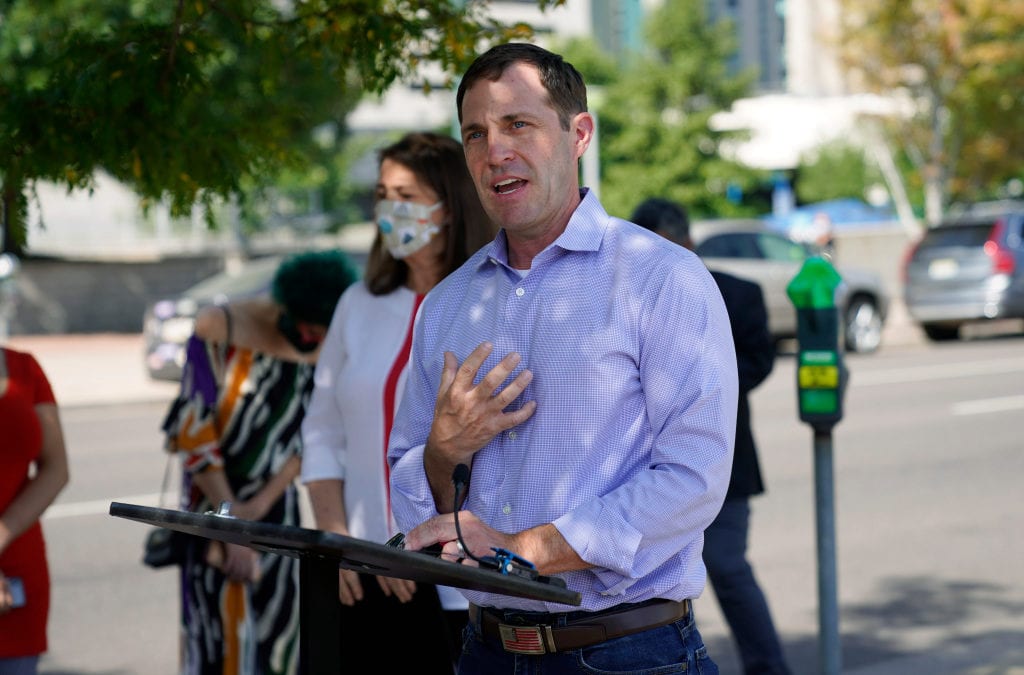 On a recent Wednesday afternoon, congressional candidate Steve House walked into a cluttered pawn shop along East Colfax Avenue in Aurora as an employee, recognizing his incoming customer, playfully shouted, “Hey, no politics in here!”

Wearing a suit and tie, and speaking genially behind a black mask, the Republican underdog for Congress is known in many of the eclectic storefronts that line East Colfax, near his campaign office. Earlier in the day, he met with local business owners, most of whom were Black, for an impromptu and wide-ranging talk about the issues of the day, primarily systemic struggles in the city’s Black community.

On Nov. 3, House will try to do what Republicans did without exception for decades: win an election in Colorado’s 6th Congressional District. But since Democratic Rep. Jason Crow’s 11-point victory here in 2018, political oddsmakers have written it off as a lost cause for Republicans. Cook Political Report rates it “Solid Democrat” and Crystal Ball rates it “Safe Democrat.” Calculations from FiveThirtyEight, the popular statistics website, say House has a 3% chance.

For the first time in several election cycles, there has not been an influx of outside money into the 6th District this year. There has been no public polling and no debate. All is quiet in what was once a well-trodden political battleground.

The 6th District is shaped like a backward C surrounding Denver on three sides. It includes the northern suburbs, such as Brighton, where House lives; the southern suburbs, such as Centennial and Littleton; and the eastern parts of the metro area, such as Aurora, where Crow lives. Republicans fare best in the wealthier Douglas County sections; Democrats are strongest in Aurora and Arapahoe County.

“Eight-nine percent of the time, the House candidate with the most money wins the race, especially if they’re an incumbent,” House said in an interview, referring to Crow’s money advantage. “So, we automatically only have an 11% chance of beating him. However, when you’re a freshman in Congress, your biggest risk is your first reelect. So, if we’re going to beat Jason Crow, now is the time to do it.”

Crow is wrapping up a high-profile freshman term that hopped from crisis to crisis. He entered Congress during a record-long federal government shutdown, was a prosecutor in the impeachment trial of President Donald Trump and self-quarantined after exposure to coronavirus.

“Maybe I have a knack for timing in public service, that I end up going into government and public service work during very turbulent times,” he said with a laugh Tuesday, thinking back to his three combat tours in Iraq and Afghanistan. “It does seem to be my history.”

House, a former health care executive, has tried to make health care the central issue of the race, an unusual strategy for a Republican in 2020. His campaign website says he wants to repeal the Affordable Care Act, but he said in a recent interview that he’s open to reforming the 2010 law instead.

House believes price transparency and increased U.S. drug manufacturing will begin to lower the cost of care. Under House’s plan, medical savings accounts would then be created and insurers would pay bonuses into the accounts of people who remain healthy and hit wellness goals. Late in life, if people have remained healthy, they can move that money into a retirement account, under his plan.

Crow supports Medicare X, a reform favored by moderate Democrats that would allow Americans to either keep private insurance plans they currently have or purchase a government health insurance plan similar to Medicare. It would include benefits Medicare does not, such as pediatrics and maternity care. A recent House TV ad accuses Crow of wanting to gut medical benefits and cut Medicare.

“When I saw it, it just made me sad,” Crow said of the ad. “I’ve always gotten along with my opponent, and it’s sad to see him give in to what I think of as Trumpism — straight out lies and distortions — during a political campaign. That’s what people dislike about politics.”

Crow has run only positive television ads — a common tactic among incumbents who expect to win easily — that have highlighted his work on health care, the environment and coronavirus relief. Over the summer, he took his volunteers off the campaign trail and put them to work sending 67,000 text messages with COVID-19 resources and information to 6th District residents.

House, an unsuccessful 2014 gubernatorial candidate who went on to chair the Colorado Republican Party, has made some missteps. In August, his campaign removed a photo of Elijah McClain from a flyer after the McClain family said it did not have permission to use it. Last month, his campaign deleted social media posts that incorrectly claimed he had been endorsed by an OBGYN group.

Win or lose, House plans to keep his campaign office on Colfax through the rest of the year. He has bought decks of Scrummy, a vocabulary game developed in Denver, and plans to host tournaments there for local kids after the election.

Crow, meanwhile, is hoping for a sophomore term less chaotic than his first.

“I am looking forward to an opportunity that I hope to get,” the congressman said in an interview last week, “where we don’t have to spend all this time responding to crises manufactured by President Trump.”