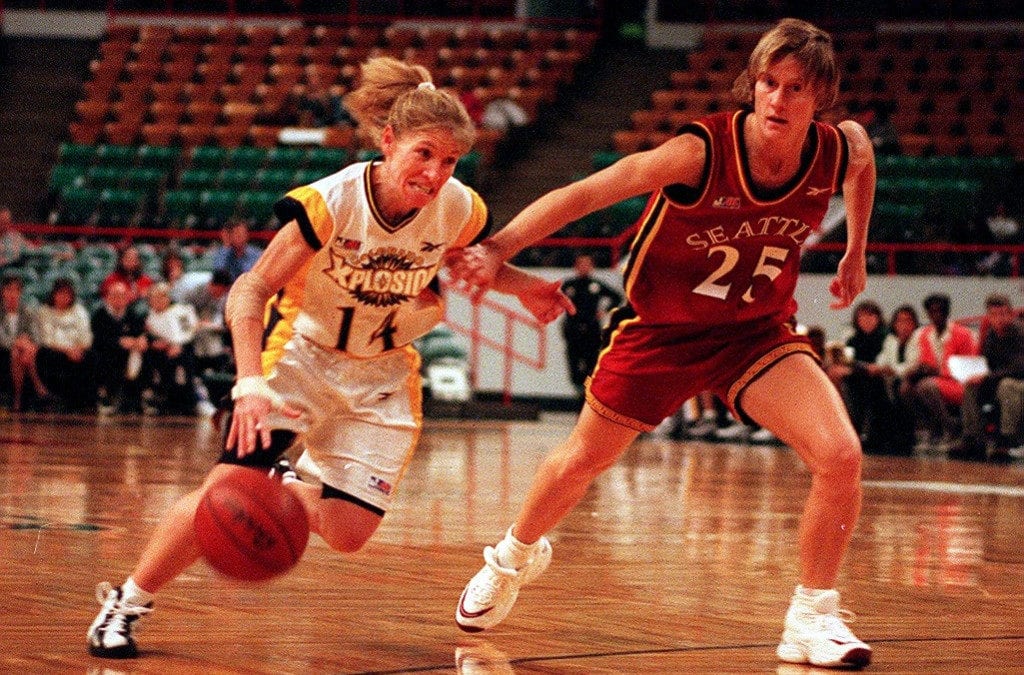 Amid the dust, dinginess and sparse crowds of Denver Coliseum, the Colorado Xplosion planted seeds for the growth and stabilization of women’s professional basketball.

The unheralded team was at the center of momentum in women’s basketball in 1996 as one of eight original franchises in the American Basketball League. The ABL launched that October as the country’s first women’s pro basketball league, following the spike in the sport’s popularity following Team USA’s gold medal run at the Atlanta Games.

And even 21 years after the ABL folded, former all-star guard Debbie Black reminds Colorado sports fans of the indelible, albeit overlooked, impact of the Xplosion. The team won the Western Conference its first season and made the playoffs again in its second in a league that initially dominated the WNBA, which began a year later, in talent.

“Straight up, we were the better league,” said Black, now an assistant coach at UT Chattanooga. “It was a whole different level of women’s basketball that no one in the country had seen at that time, besides the Olympics … The ABL was competitive, and we were one of the best teams. The Xplosion helped set the standard you see in the WNBA now.”

When the ABL was founded in 1995, the 11 players from the 1996 Olympic team and rights to the nation’s top college players were to be dispersed among each of the original eight teams in the winter league. But four of the Olympians — Lisa Leslie, Rebecca Lobo, Ruthie Bolton and Sheryl Swoopes — held out to play in the WNBA, which began in the summer of 1997.

That proved problematic for the Xplosion, who were in line to get Swoopes. As a result, Colorado ended up as the only team in the league without an Olympic player and was thus awarded two picks ahead of the inaugural 1996 draft as compensation. But without a bona fide star, the franchise’s initial prospects appeared bleak.

“We were 3-8 at Christmas, then we won 12 in a row,” original Xplosion head coach Sheryl Estes said. “We turned it around completely. We won the conference championship that first year with a lot of players that other coaches weren’t looking at (in the scouting process).”

Keisha Anderson of the Colorado Xplosion controls the ball against Media All Stars Chris Dempsey in the 1st half on Tuesday, Oct. 13, 1998 at the Regis University field house in Denver.

With those compensatory picks, the Xplosion selected guard Edna Campbell, who turned into a 1997 all-star, and Sylvia Crawley, a talented 6-foot-5 forward who made national headlines with a blindfolded slam in the league’s 1998 dunk contest.

Colorado’s original starting five was rounded out by forward Charlotte Smith (third-round selection), Black (sixth-round) and Robinson (eighth-round). Black was named the 1997 ABL Defensive Player of the Year, and Robinson earned Rookie of the Year honors as the Xplosion finished 25-15.

“We weren’t supposed to be very good,” Estes said. “But it helped we didn’t have a lot of egos — everybody was just there to play and prove themselves.”

That was especially the case for Black and Robinson. Black played eight years professionally in Australia prior to her time with the Xplosion, and unlike the Olympians and high-profile Division I stars who were guaranteed a spot in the start-up league, the scrappy 5-foot-3 guard endured a rigorous tryout.

“The tryouts were in Georgia, and there were about 500 women trying out,” Black recalled. “I flew there from Tasmania and I would’ve thought it was a hoax. They started me in the ‘C’ group with all the other unknowns, and I had to work my way all the way up to the ‘A’ group and then just hope I got drafted for a chance to play in the states.”

In the case of Robinson, an unknown talent out of the NAIA level at Southeast Oklahoma State, she was playing for the intertwined fates of her own career as well as the overall growth of women’s basketball.

“The ABL ingrained the idea in people that this can be a profitable thing — we just had to figure out how to do it the right way,” said Robinson, now an assistant for the Dallas Wings. “At that point, our focus as players was not to make money. Our focus was to make a sustainable, viable league to give us opportunities to play professionally in this country and build the sport in the United States.”

Money gave the ABL a competitive edge over the WNBA. And it was also money, or the lack of it, that led to the ABL’s sudden folding one-third of the way through its third season, with the majority of its players eventually landing in the WNBA.

Robinson described the ABL as “a player’s league,” and the financials backed that up. The players owned 10% of the league and were paid well, with the minimum salary set at $40,000 for the first season. Olympic players made as much as $150,000 that season, and salaries went up across the board in the second season.

“Our league had the heart, it had the family feel, and most importantly it had a commitment behind paying the players fairly and putting the emphasis on the players,” Estes said.

But with the WNBA in direct competition — and with the NBA’s marketing and money behind that rival venture — the ABL was all but assured to be short-lived.

“Everybody wanted it to keep going, but revenues didn’t meet expenses,” said John Nillen, the team’s second general manager. “It’s that simple. The quality of the play, the talent, it was all there but the revenue stream to support it wasn’t.”

While the ABL had the distinct advantage in overall talent, the WNBA dominated in big-name sponsorships and high-visibility TV contracts with NBC, ESPN and Lifetime. Meanwhile, the ABL’s much more modest TV package only featured two championship series games on CBS, plus 16 regular-season games on Fox SportsNet.

“In retrospect, the ABL tried to do the league the right way and have it during the basketball season, but didn’t realize the obstacles the league would face in competing with college football, professional football, college basketball and men’s pro basketball,” Estes said. “There’s not enough TV time in the winter for a women’s professional league.”

Attendance also waned league-wide. For the Xplosion, who split their home games between the Coliseum and McNichols Arena, attendance dipped from an average of 4,103 in the first year to 2,484 in the third season.

The disparity in TV contracts and decline in attendance was accompanied by other obvious bad omens for the ABL, such as when the league’s first MVP, Nikki McCray of the Columbus Quest, bolted for the WNBA after one season. Even still, the league going bankrupt and suspending operations 13 games into the Xplosion’s third season blindsided many.

“We were getting paid very well, so we would’ve taken cuts in our salary to keep the league going,” Black said. “I just wish the league would’ve come to the players and we could have all tried to figure something out.”

No WNBA franchise came to Denver in the wake of the ABL’s folding, although the Colorado Chill of the now-defunct National Women’s Basketball League played in Loveland from 2004-06. Despite the absence of top-tier professional women’s basketball in a city that was once a pillar of it, Estes argues the ultimate legacy of the Xplosion and the ABL is that the league not only competed against the WNBA — it laid the base for its rival league in the first place.

“Both the NBA and the ABL saw the opportunity after the ’96 Olympics in Atlanta — the gold medal, and the year the national team spent on the road and all the attention they had gotten,” Estes said. “They both saw the opportunity, but I believe the formation of ABL spurred the NBA to start the WNBA. And the early success of the ABL led to what we all wanted — women’s professional basketball in the United States.”

A glimpse at other professional sports teams in the state that were part of leagues that folded.