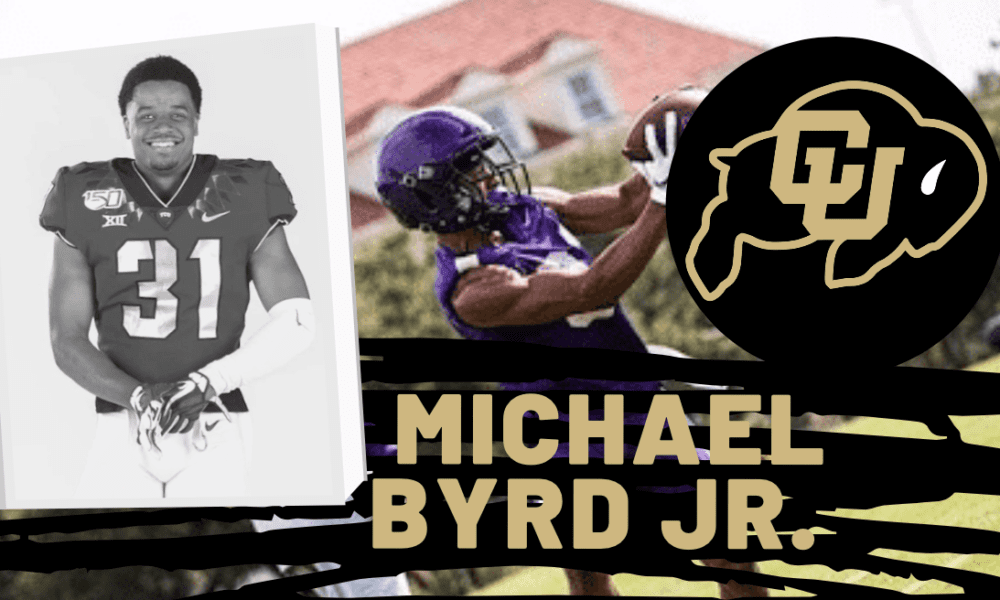 Colorado wide-out, Michael Byrd Jr., is a legit weapon. He just needs the opportunity and the ball. When you watch the tape on this young up and comer, it is easy to fall in love with the potential he brings a team. Blessed, with true speed, a clean route runner, and the skill set to turn into a running back with the ball in his hands. The former, TCU weapon, can be a real headache for defenses.

I sat down with the 5’7 170 LB, receiver and picked his brain on his take, on the state of football, dealing with covid-19, who he was outside of football? and a few other things. But before I did so, I asked an old friend of mines, and scouting source currently in the NFC East, and asked him his thoughts on Byrd, and what he felt he could bring to an NFL roster?

“Well, it’s tougher with his guy, for me. See it isn’t that he isn’t talented, I just haven’t gotten to see a ton of film on him. I think he needs more opportunity, give the kid more chances and he has the skill set to stand out. I like him in Colorado, I liked him at TCU. He just hasn’t had the chances we would like to see. But the positives. he is sharp, very intelligent, you hear it from all his coaches. I don’t think there is a route he can’t run, and you like that in your guys. He is a real runner, nice speed on him, and I think he can help all over the field. You let him catch a screen get him in open space, you let him return punts or kickoffs, and I think you got something here. Kids got some real talent, so, give him a real shot, we could be having a much different conversation. He has the potential you look for, so give it time, and we will see.”

The football world has been shaking up, by the covid-19, pandemic. It has been tough knowing who is and isn’t going to play, week to week. I truly feel for these guys, as this is their livelihood, and are looking to make careers, out of playing this game. I asked Byrd, what it was like dealing with this pandemic? and how he stays ready to go?

” Yeah man, it’s been a weird year, weird times around us. Around the world really. You see it every day, the effect, it has on the game, in schools, and on people. it’s been a tough kind of guessing every day what’s going to happen. I mean the best we can do is stay prepared. You stay prepared, you don’t have to get prepared. Honestly, I just stay in my playbook, I work out when I can, and I stay ready for what we can and can’t do. It has been tough, but you kind of have to just deal, and keep it moving. That is basically what I am doing. ”

Being blessed with pure hands, true speed, and a willingness to do whatever it takes, on the field. Byrd has the potential to be a game-breaker. I asked him who he was outside of football, and what he felt he could bring to a team, as a player, and as a man?

“Outside of football, you probably hear this all the time, but I am just a normal guy. I like to relax and chill. I am not gonna get into a lot of wild stuff, or anything crazy really. I like being low-key and staying to myself. I am a family man, I love my family and I love my friends. As far as what they will get as a man and a player? In the locker room, they will get the same guy I always am. I don’t switch up, and never will. They will get a guy who is a locker room guy. Someone who is trustworthy on and off the field. I love my teammates, those are my brothers. And when I move on to another team in the NFL, I will be the same man. But as far as the player a team will get? Hard worker! I will bust my butt for my team and my teammates. I don’t like to be outworked, ever, so I will give it all. Blood sweat and tears, I am leaving that all on the field, and that’ll never change for me man. So on the field, they got a guy who is going to work hard for everyone, try to make myself better every day. I will try to make my teammates better every day. They will always know they have a guy who is 100 Miles an hour, all the time. I can’t give any less.”

In last year’s NFL Draft, Byrd’s former teammate, WR Jalen Reagor, was drafted to the Philadelphia Eagles. I asked him if he ever reached out to Reagor for advice, while he gets ready for the year?

“Yeah, I talk to Reagor, once in a while via social media. I know he is a busy guy Like I am, and he was dealing with the hand issue, so I didn’t want to bother him lately. But yeah, he gives me quick words all the time, we keep up with each other there. I won’t get too deep into everything we talk about, but as far as advice goes. he just says stay the course really, take it day by day, and control what you can control. He has been an inspiration watching him, and he has been a great guy to talk to and pick his brain.”

Put on the tape. Watch whatever film you can get on Byrd. Highschool, practice, whatever it takes. You will see a guy with immense potential, and a man who could be a game-breaker on any play. He has the tools to be a weapon at the next level. All he really needs is a chance and get out of his way.