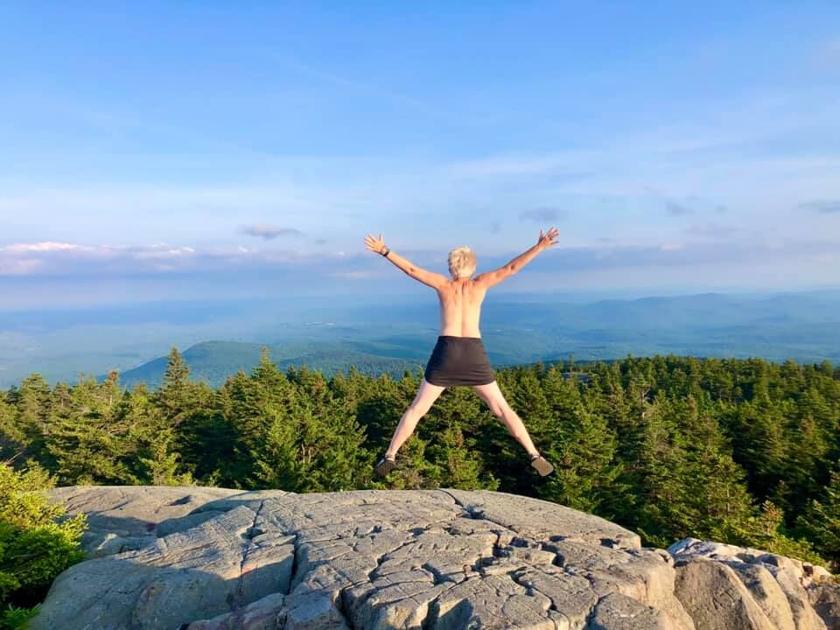 Lauren Robison had been waiting for the right moment.

In awe of the views near the end of a hike through Black Canyon in Gunnison, she thought, “Yup, this is the one.”

It helped, too, that no one else was around.

Robison planted her feet among some wildflowers. She took her shirt off. And her sports bra. She lifted up her arms and stood with her body facing the big, beautiful canyon.

As a friend took her photo, the Colorado Springs woman was nervous.

“Oh my gosh,” she thought at first. “I have my shirt off in public.”

Seconds later, all she could think about was how free she felt.

“Obviously, I’m not used to going topless anywhere in public,” Robison said. “It was exhilarating and awesome.”

Taking a photo like that had been on Robison’s bucket list for a while, since seeing woman after woman post their own topless photos on a Facebook group for women who hike in Colorado.

The group, which has 20,000 members, shows dispatches from remote lakes in Montana to the Grand Canyon to fourteeners and trails in Colorado. It’s become common for women to accompany a hiking tale with a shirtless photo, always showing off their bare backs and the magnificent views around them.

As the captions say, these photos can be frivolous and fun. They also often document some of the most powerful seconds of a woman’s life.

“This body might not be the smallest or the prettiest, but it got me up a mountain today,” wrote one woman.

“Over the years, I’ve come to love my body for what it can do (versus) what it looks like,” wrote another.

Inspired by taking her topless photo, one hiker wrote a hymn to herself. In part, she wrote, “Trembling, terrified, I strip away my insecurities and expose my tenderest self to the lash and bite of the upslope wind.”

They share stories about what their bodies have been through: being shamed, bad relationships, cancer, motherhood, eating disorders. They share how they see themselves now. In taking the photo, they’re saying, “I’m confident now.”

Robison likens the photo to “giving the middle finger” to whoever made you feel less than.

“It was awesome to see so many women who have been through things in life that they have overcome,” Robison said. “And have that confidence in themselves to do such a bold thing.”

The posts “really spoke” to Lottie Looney, who lives in Arvada. But that didn’t mean she was going to take her own photo.

That changed on top of a mountain in New Hampshire, where Looney was hiking with her best friend. The typically bustling summit was empty.

Looney mentioned “those photos” to her friend and said, “Why don’t we just go for it?”

Her friend replied by tossing off her shirt and asking, “Where do you want me?”

They snapped pictures of each other. And then they posed for one together, while joining hands and leaping into the air.

”It was just incredible,” Looney said. “Instead of being bashful or shy or embarrassed, it was more a feeling of empowerment and freedom.”

Looney says she turns to nature when she needs a mental reset. When she looks at the photos, she sees a a celebration of the body “can take you all these different places that your soul needs to go.”

She doesn’t consider the photo shoot a “one and done.”

”I want to feel that free and that empowered again,” she said.

It’s hard to say when this trend started. It got some official branding in 2011, after a Telluride woman, Maddie Crowell, celebrated summiting Long Peaks by taking a photo in just her hiking boots. She was inspired to start a movement called Mountain Babes, or “Mtn Babes” for short, inviting women from Colorado and beyond to submit similar photos of themselves.

The Mountain Babes mission is simply to “inspire as many mountain ladies as possible,” according to its website.

An Instagram page for Mtn Babes, which has 55,000 followers, puts it even simpler: “Climb Mountains. Get Naked.”

The group welcomes submissions. But there are rules. “We aren’t looking for mountain pornography here,” the website reads. “We are looking for a free spirited, epically taken, artistic summit pic that demonstrates what being a mountain lady is all about.”

Not every photo is received with instant “likes.” After Robison posted her photo on social media, she said a stranger messaged her, saying it was inappropriate. In response, Robison contemplated taking the photo down.

“It took me a few hours to realize like I shouldn’t be ashamed of my body ever,” she said. “And that was an empowering moment and experience.”

When Robison posted on the Facebook group, hundreds of comments rolled in. Collectively, it was like a mountain-sized thumbs up.

“It’s amazing to see how many women support you when you post the picture,” she said. “It’s what we need more of in the world. Self love and women empowering women.”