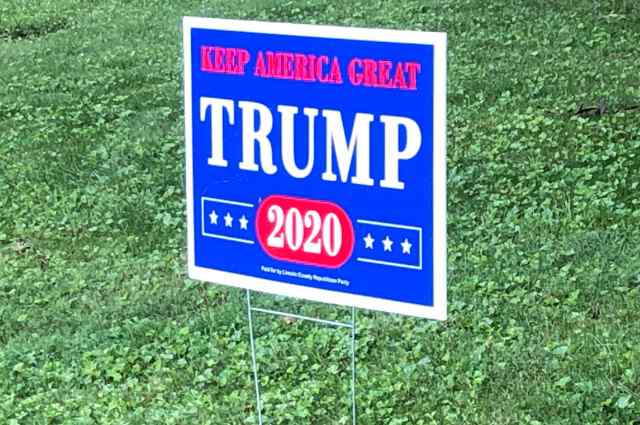 (Gateway Pundit) – A woman on Monday violently assaulted a 12-year-old boy over a Trump yard sign.

The Denver Post reported that Boulder police spokeswoman Shannon Aulabaugh said the woman was driving a moped when she spotted the boy on his bike and did a u-turn to confront him over the Trump sign.

The liberal woman approached the boy and said something to the effect of “you want something to look at,” and used a closed fist to beat the boy in the back of the head and arms several times, and scratched him.

According to the police report, a woman riding a moped passed the boy and saw the sign.

“The suspect made a U-turn and approached the victim and began assaulting him because of his political banner. The suspect then attempted to take the banner but was unsuccessful,” investigators stated.

The suspect was described as a white female, in her 20s or 30s, wearing a tan jacket, blue shirt, and blue jeans. The moped was blue or grey.

The assault is still under investigation.

The assault is under investigation and Boulder police are still looking for the woman.

Trump Supporter Kicked In The Head, Chased Down Street By BLM Mob (Video)

Video from Kenosha, Wisconsin shows a Trump supporter being viciously kicked in the head and then chased down the street by a Black Lives Matter mob in yet another example of political violence.

The confrontation began with loud arguments between the two sides but soon spiraled into physical attacks.

A short clip shows a man on the ground before he is booted in the head by a leftist. Thankfully, the man only sustained relatively minor injuries, but the force of the blow could have caused brain damage or even death in another instance.

Trump supporter gets into a fight with a few Black lives matter supporters but many shielded him from other protesters pic.twitter.com/NPxyT8dbGD

Another clip then shows the baying mob chasing the same man down the street.

“I was attacked by numerous people at the same time,” the victim told a local CBS news station, who described the confrontation as “mostly peaceful”.

“Kick to the head, one really good blow to the face. They surrounded me and attacked me and started chanting things, they were completely out of control.”

Before arriving in Kenosha, President Trump chided the media for misreporting the execution of Trump supporter Aaron Danielson in Portland last weekend as well as completely failing to report that Antifa leftists celebrated his murder.