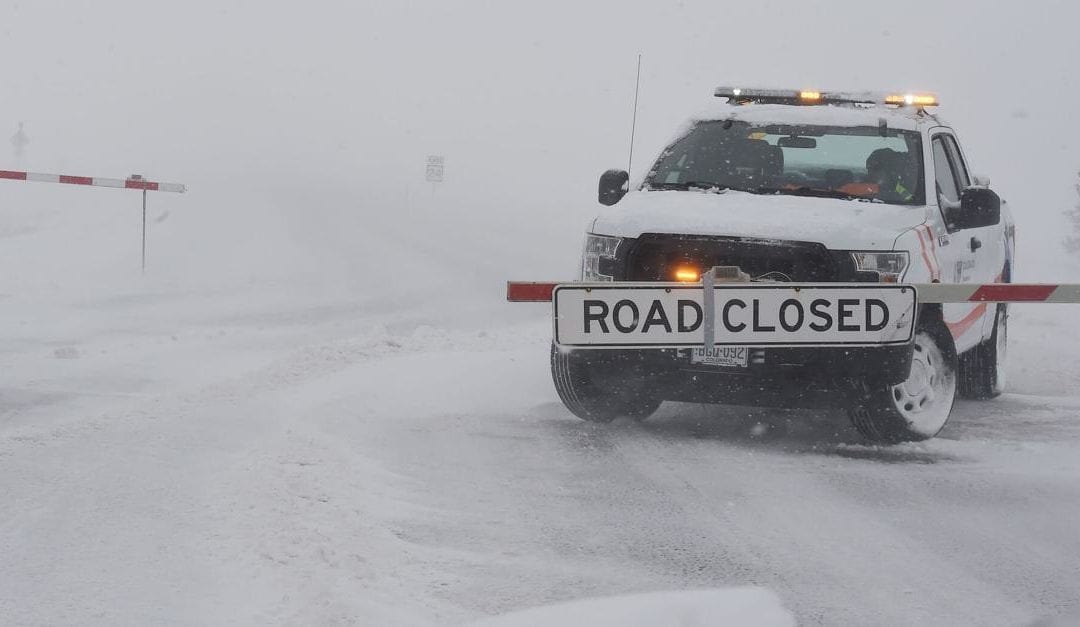 Stay with this story for updates on Colorado weather Sunday:

The Storm: Front Range communities face a second day of snow from a winter storm that’s still pounding Colorado. Denver could see another seven inches of snow while Colorado Springs faced up to five inches.

Overnight, the storm left neighborhoods around Denver with about three inches of snow and a similar amount was on the ground in the Pikes Peak region, the weather agency said.

The biggest snow totals in Colorado from the storm came near Fort Collins, with nearly a foot reported by spotters and more on the way.

Snow began falling across the Front Range just before 10 a.m. Saturday and forecasters expect snow to stick around through Sunday.

12:25 p.m.: Storm-battered Longmont will close all its public facilities Monday, including the public library and its youth and senior centers.

“Longmont was hit with 8 to 10 inches of snow overnight,” City Manager Harold Dominguez said. “Although our city snow crews are doing a great job of clearing main drive lanes, the best thing to do is close our facilities to the public on Monday. That will help keep cars off the roads and allow the plows to continue to do their job.”

The city was expecting another 8 to 10 inches of accumulation on Sunday and Monday. High winds could cause snow drifts, affecting travel.

“The best thing for the public to do is to stay off the roads,” Dominguez added.

Noon: Interstate 25 is closed in both directions between north Colorado Springs and Castle Rock due to adverse conditions, the Colorado State Patrol said.

Traffic is barred from traveling a 30-mile stretch of the interstate from Interquest Parkway, exit 153, and Plum Creek Parkway, exit 181. Highways 93 and 105 are also closed.

There is no suitable alternate route, and no estimate for reopening, the agency said.

In the Denver area, white-out conditions have likewise closed Interstate 70 between eastAurora and Limon, starting at Airpark Road.

Near Idaho Springs, eastbound I-70 is closed at the bottom of Floyd Hill — mile post 244 — because the hill is “covered with vehicles unable to make it up,” the Colorado State Patrol said. Drivers are urged to detour through U.S. Highway 6 through Clear Creek Canyon.

11:50 a.m. Some updates from Gazette journalists across the region:

Parts of Woodland Park have been already been slammed with up 16 inches of snow, as Features editor Nathan Van Dyne documents with his handy deck-side ruler.

Fellow Woodland Park resident and longtime reporter Debbie Kelley shared this pic of a bird seeking shelter in her yard. Follow her at @inkywoman for more.

11:05 a.m.: An update on conditions at Denver International Airport, courtesy of our Hannah Metzger:

The Denver International Airport made extensive cancellations and delays Sunday as the area accumulated nearly one foot of snow in the early morning.

In response to these conditions, 1,313 Sunday flights at DIA have been canceled as of 10:30 a.m., according to flightaware.com. In addition, 51 flights have been delayed.

10:24 AM: Here is a look at our updated snow reports. Additional accumulation is likely for Colorado Springs, Monument and Woodland Park over the next few hours. #COwx pic.twitter.com/KnZMoPp8cL

10:30 a.m.: Preparatory actions are being taken to potentially close I-25, according to a Sunday morning email from the Pikes Peak Regional Office of Emergency Management. The office and the state transportation department are monitoring the situation, a spokeswoman for the office said. No further details were immediately available.

10:15 a.m.: The west side of Rocky Mountain National Park is closed at the U.S. Highway 34 and Grand Lake entrance, along with Kawuneeche Visitor Center, due to worsening weather conditions, officials said Sunday.

10 a.m.: Denver International Airport officials expect as much as another foot of snow Sunday to go with the the 11 inches that has already fallen there.

All that snow has tangled travel through the facility with more than 800 flights cancelled and more than 50 delays so far.

“Airlines are operating a limited number of flights today, with the majority of flights operating late this afternoon or early evening,” the airport said in a statement.

Don’t risk a drive to DIA for a flight that’s not happening, the airport warned.

“Travelers should confirm their flight status with their airline before heading to the airport,” officials said.

9:30 a.m.: State leaders say the storm is hitting Colorado harder Sunday that it did on Saturday, making driving dicey.

“While the storm took some time to pick up yesterday, it is much more intense today — and just as it arrived a little later than anticipated, it will be with us for longer than originally expected, through today and tonight,” Shoshana Lew, who heads the Colorado Department of Transportation, said in a statement. “We ask motorists not to let their guard down; today’s conditions are worse than yesterday.”

“We saw great partnership from the public as this storm slowly moved in yesterday,” Colorado State Patrol Chief Matthew Packard said in a statement. “Now we need people’s continued help and cooperation to keep everyone safe—stay home if you can and limit travel for only essential or emergency needs.”

9 a.m.: An avalanche has closed Colorado Highway 14 from Ted’s Place north of Fort Collins to Cameron Pass, the state Department of Transportation said.

Highways 24 and 94 east of Colorado Springs are also closed due to blowing snow.

8:45 a.m.: Snow is picking up across the Front Range, bedeviling snow plow crews trying to clean up streets.

In Denver, traffic on Interstate 25 was slogging along at an average speed of 37 mph, the Colorado Department of Transportation said.

8:30 a.m.: Light snow in Colorado Springs is falling and heavy snow is hitting Denver and more and more communities ask drivers to stay off the roads.

The latest is from Fort Collins where plow crews are having to rescue stranded drivers rather than clearing streets.

“Roads are treacherous: Please do not travel unless it’s an absolute emergency,” Fort Collins officials said on Twitter. “Our snow plow crews are helping many residents with travel issues, which diverts resources from snow removal of our city’s emergency routes. Please stay at home for everyone’s safety.”

Lots of triple axels and double salchows are being accidentally completed on the roads, and wreckage is piling up on arterial streets from the Wyoming border to Pueblo.

“Please stay home and off the roads if you can,” Boulder police said in Twitter Sunday morning. “The roads are snow packed, slick and vehicles are getting stuck.”

8 a.m.: The Colorado Department of Transportation has invoked vehicle traction laws on Interstate 25 from Lonetree to Monument.

That means cars will need snow tires or chains to navigate the route.

To keep up with Sunday’s closings and delays in the Pikes Peak region, visit https://gazette.com/closings/.

7:45 a.m.: Highway 6 was closed over snowbound Loveland Pass on Sunday morning. Other high country attractions shut down amid heavy snow.

“Due to winter storm conditions, Florissant Fossil Beds will be closed today,” the National Parks Service said on Twitter.

7:30 a.m.: Travel of every kind was difficult along the Front Range Sunday. More than 1,300 flights have been cancelled for Denver International Airport.

Just under a foot of snow had fallen in Woodland Park by early Sunday morning. (Nathan Van Dyne/The Gazette)

In Woodland Park, nearly a foot of snow had fallen.

Among those opting for online Services was First Presbyterian Church in downtown Colorado Springs.

Temperatures along the Front Range were expected to hang near freezing amid Sunday’s snow, but hope was on the way.

Most communities can expect temperatures in the high 30s to mid-40s Monday and Tuesday before another, smaller storm rolls in Tuesday night.

7 a.m.: Plow crews were at work in Denver to clear icy roads, but officials warned getting streets cleaned up will take some time.

“Roads are snow covered and we’ll have our drivers on duty throughout the day to make consecutive passes and drop deicing material on the main streets, as needed,” Denver officials said in a news release. “We continue to ask residents not to drive if they don’t have to, given the challenging driving conditions. “

To the south in Parker, residents awoke to more than five inches of wet snow blanketing neighborhoods. In Colorado Springs, wind gusts were causing snow drifts.

“Avalanches will be easy for backcountry travelers to trigger and can run naturally during periods of high intensity snowfall,” the Colorado Avalanche Information Center warned Saturday morning. “Backcountry travel is dangerous and not recommended. Avoid travel on or under all steep slopes.”

6:30 a.m.: Roads were like rinks around the front range and that had fire crews hopping.

In Colorado Springs passengers were pulled from a wrecked car on Academy Boulevard near Rebecca Lane just after 3 a.m., firefighters said.

The injured were taken to hospitals for treatment, firefighters said.

6:15 a.m.: Wind gusts of up to 20 mph were cutting visibility for Front Range drivers while a layer of ice underneath the snow made for troublesome traction.

In Colorado Springs, the plow crews advised people to spend the day on the couch.

“Travel could be difficult,” the city said in a news release. “If you must travel, keep a flashlight, food and water in your vehicle in case of an emergency.”

Highways 24 and 94 were closed east of Colorado Springs and Interstate 70 was closed from Limon to Burlington.

I-25 was closed from Wellington to the Wyoming line.

Airlines are operating a limited number of flights today, with the majority of flights operating late this afternoon or early evening.