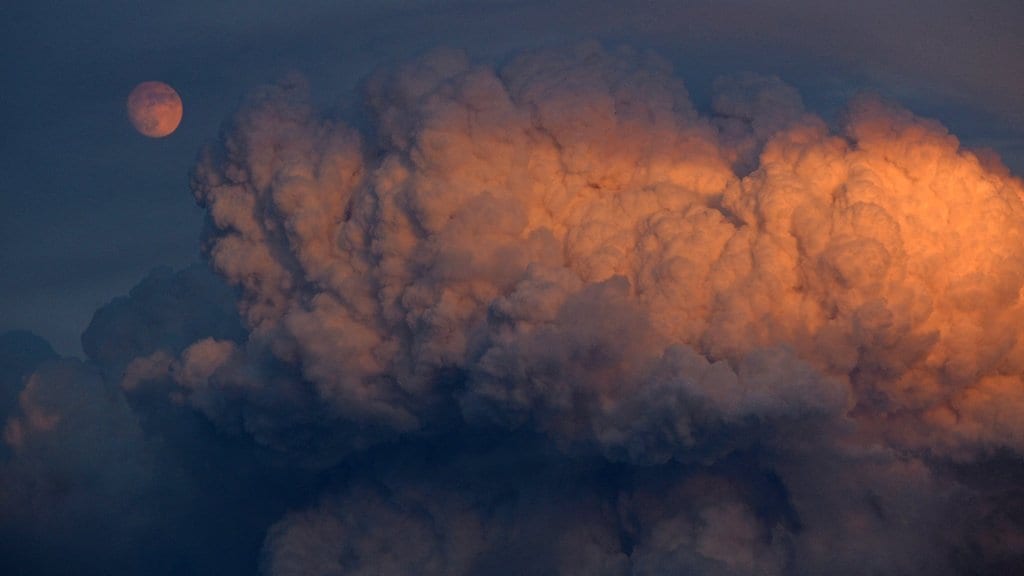 Some of the smoke from that fire, along from other blazes, has moved into Denver.

Currently, 50 large fires have burned 543,099 acres across the country, according to the National Interagency Fire Center.

In Colorado, five active fires have burned a combined 14,639 acres, according to the NIFC, which has not yet been updated to include data from the Muddy Slide fire.

The National Weather Service in Boulder issued a red flag warning on Wednesday for northern parts of the state. Rain could be on the way Friday or this weekend.

The #MuddySlideFire was a big smoke producer last night. This was the sky over Steamboat Springs.
📷 by Larry Pierce pic.twitter.com/b9B1i0qorZ

Here’s the latest on some of the fires burning in Colorado:

As of Wednesday morning, there has not been an update to the 1,025 acres of land that had been confirmed to be burned Tuesday evening. Officials are still calculating after the fire grew exponentially on Tuesday.

This Routt County blaze began Sunday and is burning on U.S. Forest Service land with no containment. More than 100 personnel are working the fire.

A mandatory evacuation order affects about a dozen homes with a shelter open at South Routt County High School. Routt County Road 16 is closed and the evacuation zone covers that road from mile marker 12 to Highway 134. The cause of the fire has not been determined.

Satellite imagery shows the #MuddySlideFire is still burning hot this evening while other fires in the state have seen fire activity diminish. The infrared data shows temperatures up to 138°C or 280°F. The #MuddySlideFire is the yellow spot south of Steamboat Springs. #COwx pic.twitter.com/73T0m3luMw

The Sylvan fire, which may have been started by lightning, is burning 12 miles south of Eagle. It grew to about 3,583 acres, as strong winds pushed it east where it reached Sylvan Lake. Nearly 115 people are working the blaze.

Mandatory evacuation orders have been issued in Eagle County for Hat Creek, Yeoman State Park and Fulford. Officials said Tuesday evening that everyone in these areas needs to get out immediately. The fire continues to burn near the town of Eagle.

The Pitkin County Sheriff’s Office said all people in the Ruedi, Meredith and Thomasville areas may be asked to evacuate if the Sylvan fire spreads. The upper Frying Pan from the dam to Hagerman Pass is under pre-evacuation notice. Evacuees can go to Basalt High School.

The largest of the wildfires currently burning in Colorado is the Oil Springs fire in Rio Blanco County. It stands at 7,395 acres and is at 0% containment, with lightning being the suspected spark on June 18. About 80 people are working the fire.

The West fire has grown to 3,107 acres and has no containment. The fire is burning mostly on Bureau of Land Management land on Middle Mountain, about 100 miles northwest of Craig, crossing over into Wyoming near the Utah border.

The fire exploded Monday, growing nearly its entire size in about 24 hours ago. About 123 people are working the fire.

Nearly 248 acres have burned south of Baxter Pass in Garfield County in far western Colorado. The fire began Monday naturally, officials believe. It is burning on federal land. There is no containment.

Wild Cow Fire has erupted northwest of Fruita. Crews will be traveling on Hwy 6&50 between Fruita and Mack to fight the fire. For those going to #CountryJam please use I-70 as your primary route pic.twitter.com/bkkI6yQokr

#WildCowFire Update as of 3 pm June 22: fire is located to the south of Baxter Pass in Garfield County and estimated at 248 acres with high fire activity. Active suppression operations are occurring. Expected to transition to the UCR Type 3 Team tonight. #FireYear2021 #UCRFire pic.twitter.com/M5F8ihkE4x