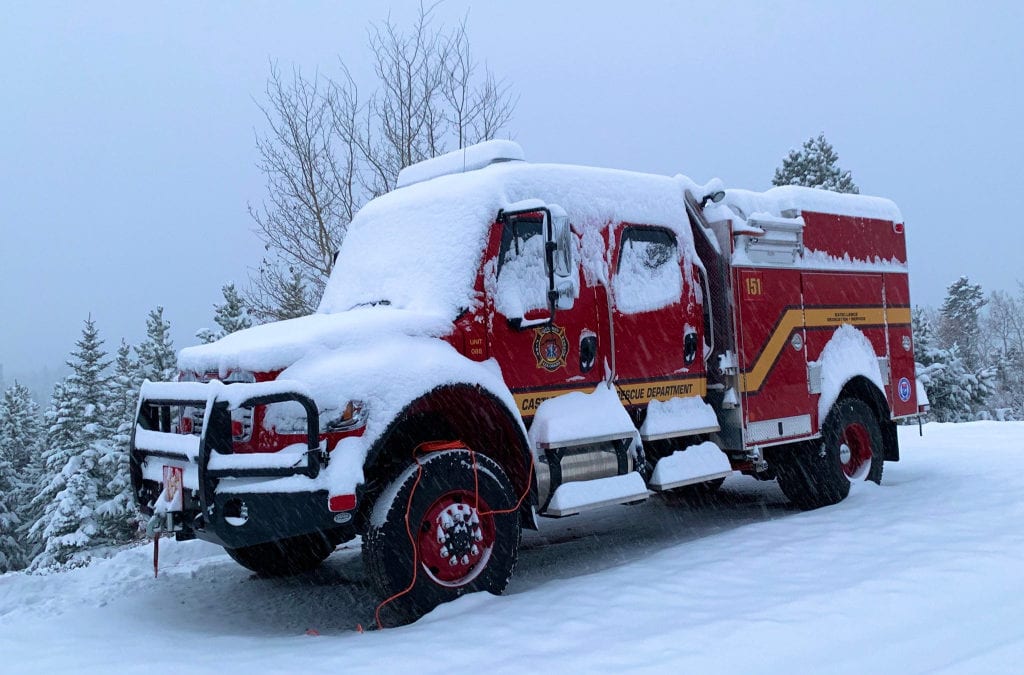 The Cameron Peak fire, burning in Larimer County and the biggest fire in state history, has burned 208,663 acres, about 326 square miles, and is 64% contained.

The East Troublesome fire, the second-largest fire in state history burning just north of Granby and into Rocky Mountain National Park, has burned 192,560 acres, almost 301 acres, and is 15% contained.

Both wildfires, hit Sunday and overnight by snow and frigidly cold weather, are not expected to grow on Monday and the moisture will likely calm the fires for at least a couple days, fire officials said.

Noel Livingston, the East Troublesome fire incident commander, gave the Monday “morning briefing in the snow, one of those things that doesn’t happen to us that frequently, but we are really happy to see it.”

“We are really happy to see the snow and we are going to take advantage of it,” he said.

Structure and home damage assessments are underway in the fire zone and the snow is making some areas hard to access.

On Sunday and Monday, many firefighters were able to catch a much-needed rest. Fire engines have a hard time traveling back roads that are snow packed and temperatures in the single digits and teens impacted firefighters efforts and raised safety concerns.

Primary focus on the East Troublesome fire on Monday will be to “get people back into their homes,” Livingston said.

The fire’s “footprint” is not expected to grow in the short term, but “it is not going to put the fire out,” Livingston said.

On the Cameron Peak fire, up to 2 feet of snow fell in some areas, said operations section chief Paul Delmerico at a Monday morning briefing.

It snowed across the entire fire area “which is a huge plus for all of the firefighters who have been engaged for the past 76 days,” Delmerico said.

The snowstorm limited the fire Sunday and overnight, with no growth of the massive perimeter. Fire officials expect little to no growth on Monday.

Winds chills, frigid weather and road conditions are a concern for firefighters. Fire crews will monitor the fire and work in areas “where access is safe,” according to a morning update.

“Precipitation received over the fire the past two days will significantly diminish fire behavior in the short term but may not be enough to end fire season for the year,” fire officials said.

Monday’s weather will remain very cold, below freezing, with frigid temperatures overnight, but the extended forecast calls for a drying trend with seasonal temperatures, above freezing, during the day, and no precipitation.

For now, in the aftermath of the snowstorm, “I do think we are in a very good spot,” Delmerico said.