Colorado wildfire took hold ‘in blink of an eye’: governor 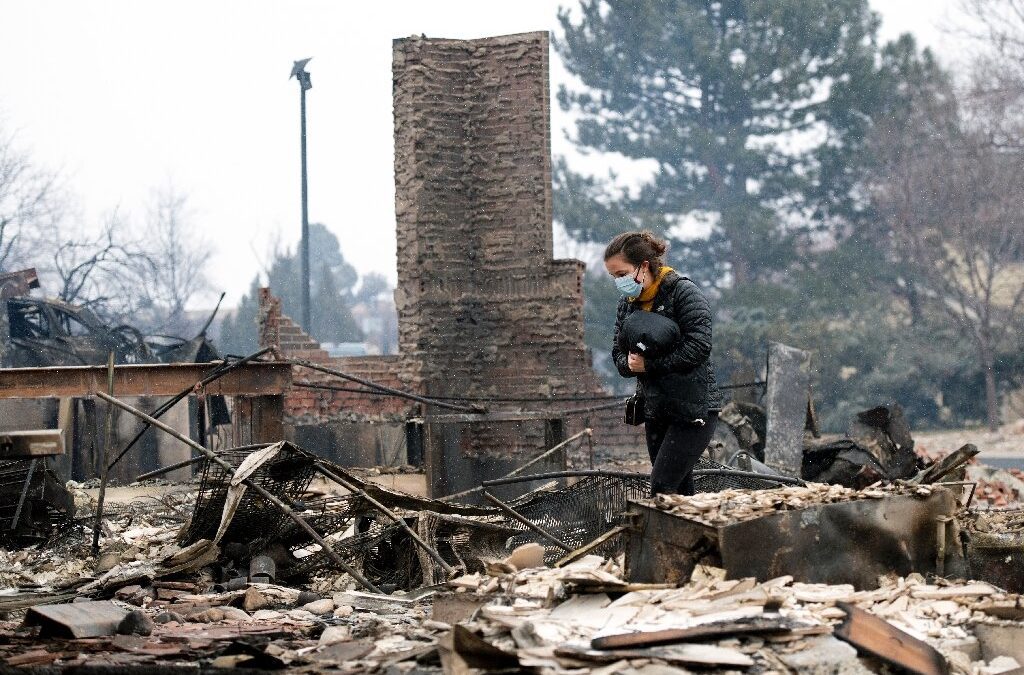 A fast-spreading wildfire that tore through several Colorado towns—laying waste to entire neighborhoods “in the blink of an eye,” according to the governor—had largely burned itself out Friday, with heavy snow expected to douse any remaining embers.

At least 500 homes were thought to have been destroyed as the blaze took hold of the town of Superior, just outside the state’s biggest city Denver, forcing tens of thousands of people to flee but there were no deaths reported so far.

“This was a disaster in fast motion… over the course of half a day. Many families having minutes to get whatever they could—their pets, their kids—into the car and leave,” state Governor Jared Polis said. “Just as in the blink of an eye.”

Downed power lines are believed to have sparked grassfires in the tinder-dry landscape that were then fanned by winds gusting at more than 100 miles (160 kilometers) an hour on Thursday.

At least 33,000 people in the towns of Superior and Louisville were told to flee, many doing so with little more than the clothes on their backs.

Boulder County Sheriff Joe Pelle told a press conference on Friday that he had seen swathes of the town utterly destroyed, while other areas had been spared.

“We won’t have final numbers until late tonight or tomorrow, but we are fully expecting this to be 500 or more homes that were lost,” he said.

Pelle said the fire had burned in a “mosaic,” leapfrogging some streets but laying waste to others.

It “devastated some neighborhoods and some blocks,” and left others “untouched,” he added.

Pelle, who said Thursday he expected injuries and deaths as a result of the wildfires, praised the community response in quickly heeding evacuation orders, which he said had saved lives.

“It’s unbelievable when you look at the devastation that we don’t have a list of 100 missing persons, but we don’t,” he said.

“I am hoping that’s a miracle because it would be given the circumstances.”

A powerful storm system bringing heavy snowfall was blowing into Colorado on Friday.

Up to a foot (30 centimeters) of snow is expected in some parts of the state, in a blizzard that should help to extinguish the fires, which have largely burned themselves out through lack of available fuel now that the winds have dropped.

“There’s still areas burning inside the fire zone, around homes and shrubbery, but we’re not expecting to see any growth of the fire,” Pelle said. “I think we’re pretty well contained.”

Around 6,000 acres (2,400 hectares) were affected, much of it in urban and suburban areas. Homes, shopping centers and hotels were impacted.

Colorado media outlets reported a handful of people had been treated for burn injuries, but there were no reports of any deaths.

The area’s infrastructure remained under strain, with residents ordered to boil water before drinking it.

President Joe Biden has declared that a major disaster was underway in Colorado and ordered federal aid be provided to the state, the White House said.

Like much of the American West, Colorado is in the grip of a years-long drought that has left the area parched and vulnerable to wildfire.

Although fires are a natural part of the climate cycle and help to clear dead brush, their scale and intensity are increasing.

Scientists say a warming climate, chiefly caused by human activities such as the unchecked burning of fossil fuels, is altering weather patterns.

This prolongs droughts in some areas and provokes unseasonably large storms in other places.

Daniel Swain, a meteorologist at the University of California, tweeted that it was “hard to believe” these fires were taking hold in December, usually a quieter time for blazes.

“But take a record warm & dry fall, only 1 inch of snow so far this season, & add an extreme (100mph+) downslope windstorm…and extremely fast moving/dangerous fires are the result,” he said.

Citation:
Colorado wildfire took hold ‘in blink of an eye’: governor (2022, January 1)
retrieved 2 January 2022
from https://phys.org/news/2022-01-colorado-wildfire-eye-governor.html
This document is subject to copyright. Apart from any fair dealing for the purpose of private study or research, no
part may be reproduced without the written permission. The content is provided for information purposes only.