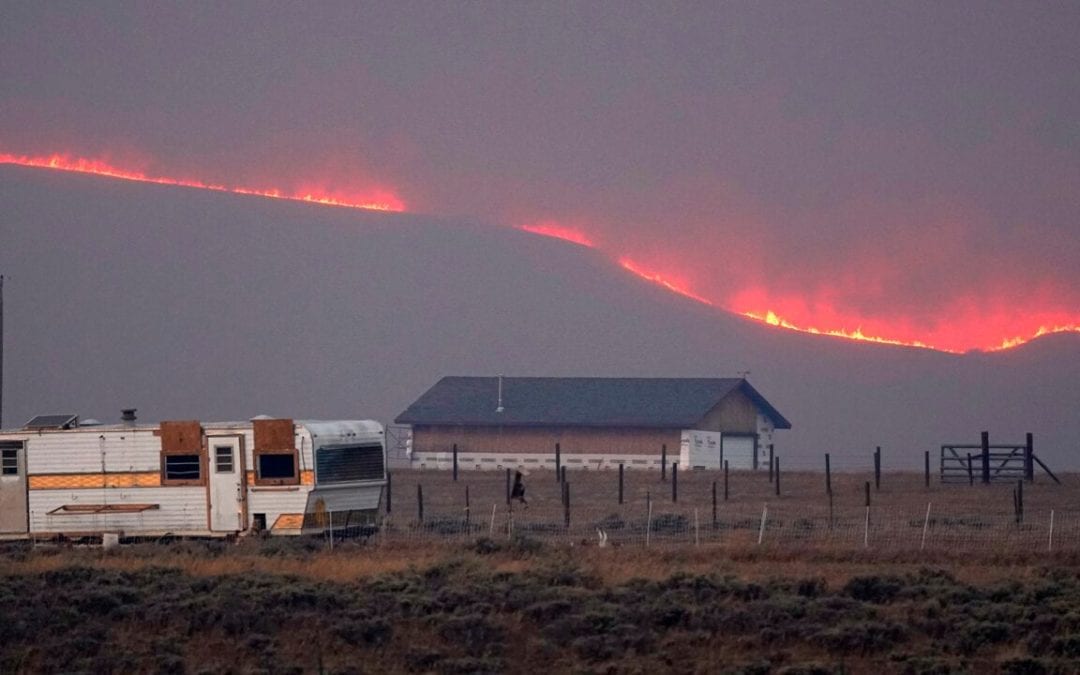 New evacuations were ordered in parts of Colorado on Saturday as high winds pushed the second-largest wildfire in state history toward homes as officials hope approaching winter weather can help slow the advancing blaze.

The East Troublesome Fire is 10% contained as of Sunday morning after scorching at least 192,560 acres, according to the U.S. Forest Service.

The blaze started Oct. 14 and exploded in size due to gusty winds and dry conditions allowing for rapid fire growth.

High winds and low relative humidity on Saturday led to red flag warnings, as officials said the blaze made a “significant run” toward the YMCA camp in Estes Park.

Flames rise from mountain ridges near a farmstead as the East Troublesome Fire burns near Granby, Colo.
(AP Photo/David Zalubowski))

Mandatory evacuations were ordered for the town of 6,300 people in the Rocky Mountain National Park as firefighters worked to hold fire lines.

Incident commander Noel Livingston said Saturday that crews had a “very active” day, trying to keep the blaze from crossing a highway.

Those forced to evacuate from the blazes have described harrowing scenes, as smoke blanketed towns and residents fled on crowded mountain roads.

Phillip Adams told Reuters the East Troublesome Fire “roared like a freight train” as it moved toward Estes Park.

“I looked out to the west and could see flames 300 feet high over the mountain,” he said.

Fire officials are hopeful that a storm system moving into the area will bring snow that will help them contain the blaze.

A Colorado State Patrol trooper turns away a motorist with a trailer at a roadblock as Smoke rises from mountain ridges as a wildfire burns, Thursday, Oct. 22, 2020, near Granby, Colo.
(AP Photo/David Zalubowski)

The National Weather Service (NWS) said that moderate to heavy snow is expected over the Rockies, where up to a foot or more could fall in higher terrain as extreme cold temperatures follow.

“These thousand-hour fuels are going to burn for a long time,” he said. “It has to have a season-ending event like a big snowstorm to put it out. We’re all hoping and praying that we get a lot of snow.”

Officials said Sunday that the fire is expected to “creep and smolder,” with minimal growth expected due to the snow.

Officials said at least two people — an elderly couple whose home was consumed by the blaze — had died in the fire. Lyle and Marilyn Hileman, who were in their mid-80s and married for almost 70 years, chose not to leave their home, local officials said after finding their bodies on Friday.

“Our parents left this world together and on their own terms. They leave a legacy of hard work and determination to overcome – something all of Grand County will need,” the family said in a statement released to local media.

Colorado has joined other states out West in experiencing a devastating wildfire season in 2020 but may get help from a shot of colder weather.

The largest fire in state history, the Cameron Peak Fire, is now 61% contained and has burned 208,663 acres. That blaze has sent smoke over the Fort Collins area, destroyed 100 structures, and forced hundreds to evacuate their homes.

Another fire that has destroyed dozens of homes near Boulder has burned 10,095 acres and is now 76% contained, according to officials. Boulder County officials said the CalWood Fire has damaged or destroyed at least 26 properties, with at least 20 homes a “total loss.”

The Colorado Department of Transportation (CDOT) urged motorists to reconsider travel due to the season’s first major storm and ongoing fires near major highways.

CDOT said the main focus for personnel and resources is assistance in road closures for fire evacuations and icy conditions from snowfall.