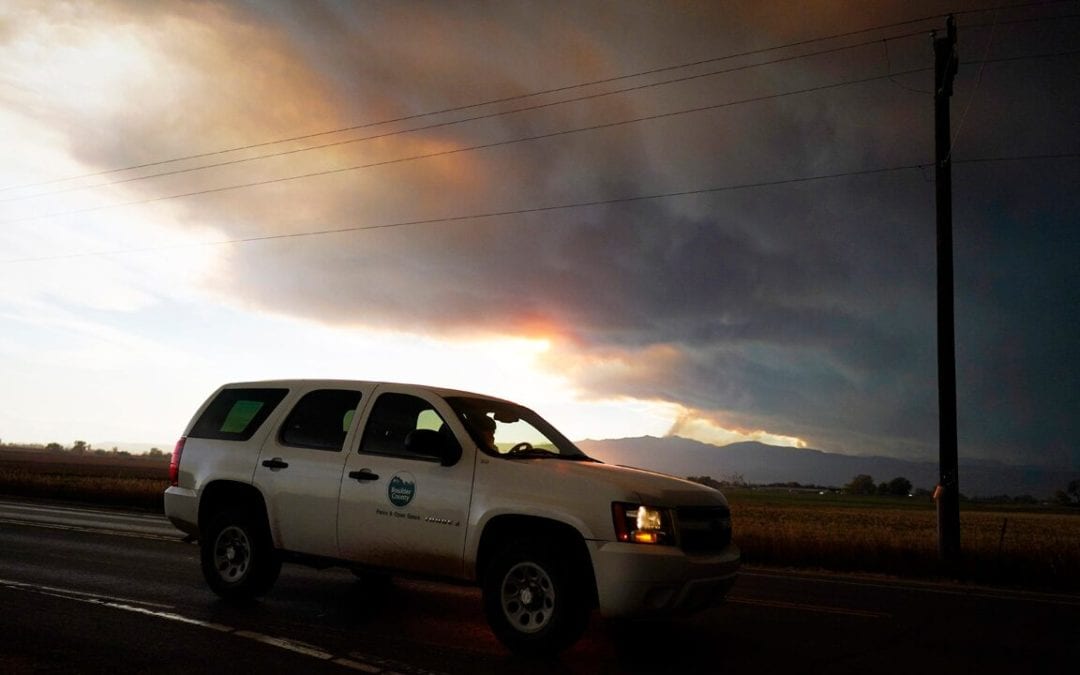 Hundreds of people were forced to evacuate from a Colorado town on Wednesday as gusty winds fanned an out-of-control wildfire that exploded in size.

The U.S. Forest Service said the East Troublesome Fire “increased significantly” in size, growing to over 125,602 acres and being only 5% contained as of Thursday morning.

“It was a challenging day,” Grand County Sheriff Brett Schroetlin said in a message posted to Facebook.

The blaze started on Oct. 14 but exploded in size on Wednesday as the region was under a red flag warning due to low humidity and gusty winds.

According to Schroetlin, the fire grew at a rate of 6,000 acres per hour on Wednesday. It was originally estimated at only 19,086 acres before winds fanned the flames.

“The winds were strong,” he said. “The fire behavior was strong.”

The fire forced the entire evacuation of the town of Grand Lake, located about 30 miles northwest of Boulder in the Rockies that has a population of around 400 people. Evacuation orders were also issued to surrounding areas.

No injures have been reported, but officials feared the blaze could have torched entire neighborhoods.

“I don’t know what we’ll see in the morning, to be honest,” Schroetlin said late Wednesday. “But you know what? Together, as a community, we’re going to get through this.”

The blaze has closed the western areas of Rocky Mountain National Park and has been impacting areas along the Highway 34 corridor in addition to the Grand Lake Area.

Those who evacuated said they didn’t have much time to grab anything.

“So we’re just hoping that it doesn’t hit our house. Nothing to do but hope right now,” a Grand Lake resident told FOX31.

The fire also forced the closure of the west side of Rocky Mountain National Park.

“The safety of the communities being impacted and our firefighters remains our highest priority,” fire officials said on the interagency site InciWeb.

The smoke plume obscures the sun as smoke tops a ridge in this view from 75th Street as several wildfires burn in the state Wednesday, Oct. 21, 2020, in Niwot, Colo.
(AP Photo/David Zalubowski)

The state of Colorado has joined other states out West in experiencing a devastating wildfire season in 2020.

The largest fire in state history, the Cameron Peak Fire, is only 55% contained and has burned 206,977 acres. That blaze has sent smoke over the Fort Collins area, destroyed 100 structures, and forced hundreds to evacuate their homes.

A funnel of smoke builds over a roadblock into a housing area along Highway 7 as several wildfires burn in the state Wednesday, Oct. 21, 2020, in Lyons, Colo.
(AP Photo/David Zalubowski)

Another fire that has destroyed dozens of homes near Boulder has burned 9,978 acres and is only 24% contained, according to officials. Boulder County officials said the CalWood Fire has damaged or destroyed at least 26 properties, with at least 20 homes a “total loss.”

Due to the ongoing fire danger, officials have closed vast areas of national forest from areas west of Denver all the way to the Wyoming border.

The risk for fire danger remains high in Colorado on Thursday, with dry, warm, breezy conditions not helping the situation.

Gusty winds and warm temperatures will not budge, even as areas to the north see snow.

Gusty winds and warm air to the south are fueling the risk of wildfires out West.
(Fox News)

“So, unfortunately, we’re not getting any of that moisture into areas that need to see it where we have the wildfires that continue to burn,” Fox News senior meteorologist Janice Dean said on “Fox & Friends.”

Fox News’ Janice Dean and The Associated Press contributed to this report.