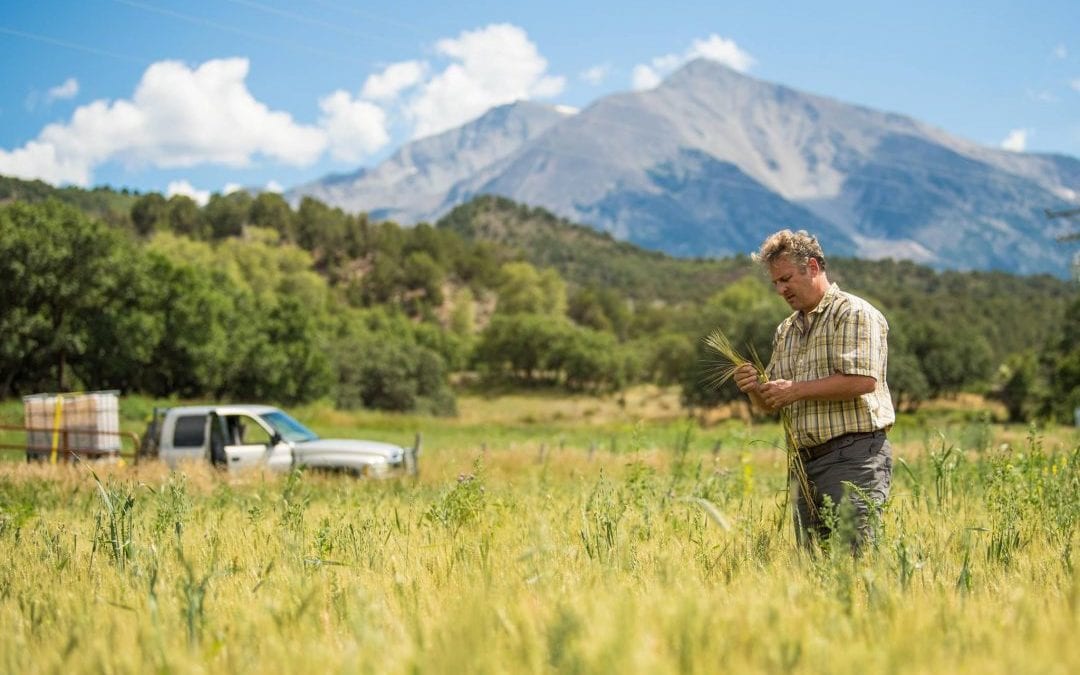 Usually, when you take a sip of rye whiskey, you’re left with a slightly spicy taste that lingers for a few seconds after you swallow.

But when you drink Laws Whiskey House’s rye whiskey, you get more of a light, pleasant hint of vegetables — like serrano peppers — instead.

“That’s from the soil,” said Alan Laws, the distillery’s founder. “It matters. These flavors come from somewhere. We’re like dirt-to-glass instead of grain-to-glass.”

The reason for this distinct flavor difference: The rye used to make the whiskey was grown in Colorado’s San Luis Valley, which has its own terroir, the French term usually associated with wine that describes the impact of soil, climate, weather and other hyper-local growing conditions on the finished product.

Craft distillers across the state are using local ingredients — often partnering directly with growers and producers — to create spirits that are not only made in Colorado, but also grown in Colorado, with flavors that are unique to the Centennial State.

With their highly trained palates, Colorado’s craft distillers say they can taste the influence of our cool nights, hot days, abundant sunshine, high altitude and dry climate, among other environmental and climatological factors, in every batch.

In addition to making tasty spirits, these relationships with Colorado growers are leading to some pretty cool experiments with different grain varieties, malts and more. As an added bonus, craft distillers are helping to support small, family-owned farms at a time when that profession is exceedingly challenging.

“We like to say we’ve shaken the hand of every farmer we’ve ever bought grain from, and that is the absolute truth — some of them are becoming close friends,” said Rob Masters, head distiller for Family Jones in Loveland. “You can tell the difference in flavor, and flavor is most important.”

When Laws first launched his Denver distillery nearly 10 years ago, he knew he wanted to make spirits exclusively with Colorado-grown grains. But at that time, it was tricky to find local growers interested in working with a distillery.

Over time, however, that began to change.

One person driving that shift was Jason Cody, a fourth-generation farmer in the San Luis Valley who in 2008 started a small malting business using the family’s old, unused dairy tanks and grains grown on the farm. Laws stumbled upon a bag of Cody’s malted wheat in a homebrew shop, tried it out and loved it. He tracked down Cody’s phone number and gave him a call.

“He said, ‘Hey, I need to buy like 6,000 or 8,000 pounds of malted rye, can you do it?’ That was a huge order; I didn’t know if I could do it,” said Cody, who co-owns Colorado Malting Company with his dad, brother and uncle. “But we figured out how to pull it off, and we’ve pretty much been connected at the hip ever since. It’s a great relationship.”

The benefits go both ways. Working with local farmers, Colorado distillers get the peace of mind of knowing exactly where their raw ingredients are grown and how. (Many are grown without the use of pesticides and herbicides, and the grains themselves are often not genetically modified.)

For farmers and producers, these partnerships are more lucrative than selling grains to a co-op for commodity purposes like cattle feed and high-fructose corn syrup; distillers and brewers often pay up to two or three times the going rate for grains.

By partnering with local craft maltsters — who often grow grains themselves or work directly with farmers — distillers and brewers have access to a dizzying array of malts, which can produce big differences in flavor and open the door for experimentation. (Malting is the process that converts grains’ starches into fermentable sugars, which later become alcohol.)

Depending on the location of the farmer or maltster, buying local can also help lower a distillery’s environmental impact. Marble Distilling in Carbondale partners with the Nieslanik family, which runs a third-generation ranch a mile from the distillery. The ranchers not only grow much of the grain used to make the distillery’s spirits, but they also feed Marble’s spent mash to their cattle and helped convert their potato cellar into a rickhouse; the distillery sells Nieslanik beef in its tasting room.

“We just want to support them,” said Connie Baker, co-founder and head distiller. “It’s a beautiful relationship and all happening within a mile of the distillery, so it’s a low carbon footprint and a win-win for everybody.”

Plus, in Baker’s mind, these Carbondale grains just taste better.

“We want all high-elevation grains,” she said. “We know where they’re coming from.”

The partnerships also have spawned grain-to-glass experiments that are leading to new and innovative spirits.

In Northern Colorado, the growers behind Root Shoot Malting and Olander Farms planted and harvested 11 different varieties of corn this summer. Soon, the team at Family Jones Distillery in Loveland, led by Masters, will make a barrel of bourbon using each variety. Together, they’ll taste and assess the various bourbons for flavor, while also taking into account factors like each corn variety’s yield, starch content and maturity date.

“We’re trying to pioneer the small grains and specialty grains for distilling and brewing, and we’re not really being led in a certain direction by anyone. We’re trying to figure it out on our own,” said Todd Olander, co-owner of Olander Farms and Root Shoot Malting. “It’s a really big experiment that’s going to take a lot of time. But it’s important to continually try different things to make sure you’re not missing out on something.”

The focus on local ingredients extends beyond whiskey, too. Dry Land Distillers in Longmont makes its gin with 100 percent native Colorado botanicals, no easy feat in a state with harsh growing conditions and very few useful native plants. (Dry Land also makes whiskey with a special antero wheat — grown within 30 miles of the distillery at Arnusch Farms  — that was developed by Colorado State University and Colorado growers.)

It took a long time to find the right mix of native botanicals grown on private land or farms — things like bee balm, single-seed juniper, elderberry, rose hips and crabapple — and even longer to get the recipe and process right.

But it was all worth it in the end, said Nels Wroe, one of the distillery’s founders. The result is a delicate, light, sipping gin, he said.

“We had to finally just say, ‘Let Colorado be Colorado,’ ” he said. “You can’t force it to be something it’s not. Once we let the botanicals speak for themselves, we got there. That’s why we’re really proud of our gin. It’s not a traditional gin. It’s just Colorado in a bottle.”