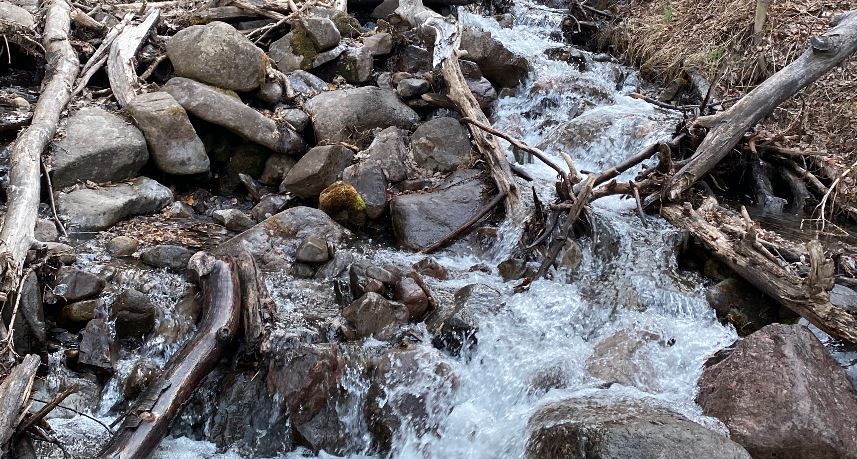 One of Colorado’s driest Aprils on record has led to diminished mountain streamflow and snow at 76% of the norm for this time of year as warmer temperatures accelerate melting.

Melting snow fed streams such as this one in the Sangre de Cristo mountains of southern Colorado as seen May 8. Federal snow surveyors say one of the driest springs on record is leading to drought.

The paltry snowpack and lack of rain over the past month resulted in lagging flows in all the major river basins, more than a month before summer, the latest federal surveys show.

River basins in southern Colorado received less than half of average precipitation, with the Rio Grande River Basin registering 16% of the norm between 1981 and 2010, according to U.S. Department of Agriculture Natural Resources Conservation Service data.

Most survey sites in the San Juan Mountains and Sangre de Cristo Mountains recorded the lowest or second-lowest April precipitation on record, the data show.

Northern Colorado river basins received more water but measured well below the norm at 77% to 84%.

Federal monitoring now shows more than half of Colorado facing drought, extreme on the southeast plains and in the upper Rio Grande Basin.

“Dry soils underlying the snowpack can absorb much of the snowmelt in the spring, which has the potential to substantially decrease the amount of water that actually makes it to a stream channel to contribute to runoff,” federal hydrologist Karl Wetlaufer said.

“Because of this effect, it is anticipated that streamflows will be less than are commonly observed in other years with a similar snowpack peak — particularly in the southern half of the state,” Wetlaufer said.

It’s been a roller-coaster year, in line with a climate-driven trend toward increased variability. As recently as April 20, federal data showed snowpack statewide measuring 104% of the norm.

And in Colorado’s central and southern mountains, snow in the Arkansas River Basin measured 69% of the norm and 33% along headwaters of the Rio Grande River. Gunnison River Basin snow has decreased to 57%, and snow along the San Miguel, Dolores, Animas and San Juan rivers decreased to 48% of the norm for this time of year.

Snow in Colorado’s high mountains serves as a natural reservoir, holding water until spring, when rising temperatures melt the snow. This sends water into streams, then rivers — and manmade reservoirs.

Federal data showed reservoirs around the state mostly full. Their purpose has been to help people endure dry times. Agriculture in Colorado uses about 85% of water supplies.