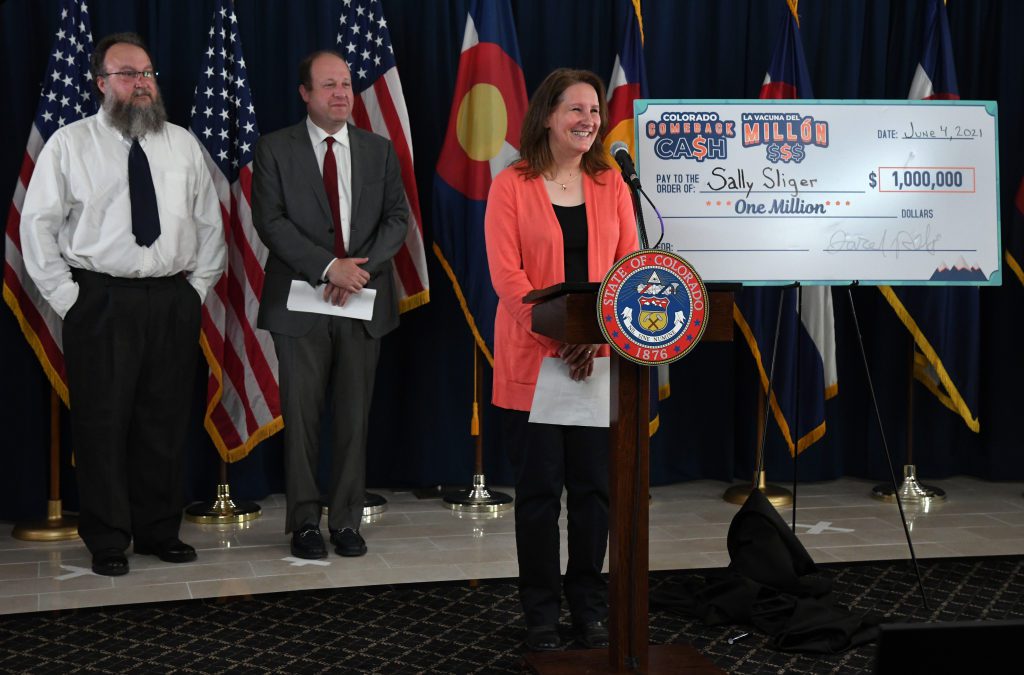 A health care worker from Weld County won the first $1 million drawing in Colorado’s vaccine lottery, and urged those who haven’t been immunized against COVID-19 to get the shot now.

Sally Sliger, of Mead, said she got vaccinated in April so her family could get back to gathering for birthdays and other celebrations. Winning the lottery was a “surreal” bonus, and she and her husband will use the money to pay off their sons’ student loans and take care of some home projects, she said.

“A stable future is worth all the money in the world, but it doesn’t hurt to take your chance at a lottery,” she said at a news conference with Gov. Jared Polis on Friday afternoon.

The state will draw four additional winners over the next four weeks. A separate drawing, for kids ages 12 to 17 who’ve been vaccinated, will chose 25 winners who each will receive a $50,000 college scholarship. People who want to be eligible for next week’s drawings need to get their first shot by Sunday.

The prize money comes from federal funds to promote vaccination. The funds also pay for vaccine advertising and mobile units that bring the shot to underserved areas.

Polis said the chance to win $1 million is a way to get procrastinators “off the bench,” so their protection will start sooner, and was more effective than just putting more money into advertising.

“We always look at how we get the best return on the money the federal government gave us,” he said.

So far, the lottery hasn’t led to a surge in people getting vaccinated, though Polis argued it might have helped avoid a bigger slide. In Ohio, the number of shots newly administered jumped about 33% after the state announced its vaccine lottery, but it’s worth noting that Ohio is still giving out fewer shots compared to population than Colorado.

Colorado’s COVID-19 vaccinations peaked in the first week of April, with more than 423,000 shots going into arms. The number has dropped every week since, with about 144,000 doses administered in the week ending May 23.

It appears that Black and Latino Coloradans still have received fewer vaccinations than their share of the population, though it’s difficult to know exactly how big the gap is. More than 12% of immunization records don’t include any information about race and ethnicity.

Age-based disparities are less stark than they were in earlier months, with only people under 30 still underrepresented in the pool of those vaccinated. The shots were initially only available to people who are 16 or older, but anyone 12 or older can now get the Pfizer vaccine.

On Friday, the Centers for Disease Control and Prevention released a statement urging parents to get their teenagers vaccinated, after a study found teens may be at a higher risk of severe COVID-19 than previously believed. The study was small, looking at about 200 hospitalized young people, but found about one-third of them needed intensive care, according to The Washington Post.

Colorado’s counties differ widely in their level of protection.

While most counties are seeing sustained declines in COVID-19 cases, the virus is spreading widely in Mesa County, and has pushed hospitals toward capacity. As of Friday afternoon, 431 people were hospitalized statewide with the virus, Polis said.

“It’s so unnecessary at this point,” the governor said. “There’s simply no need for this ongoing pandemic when we have the tools to stop it.”