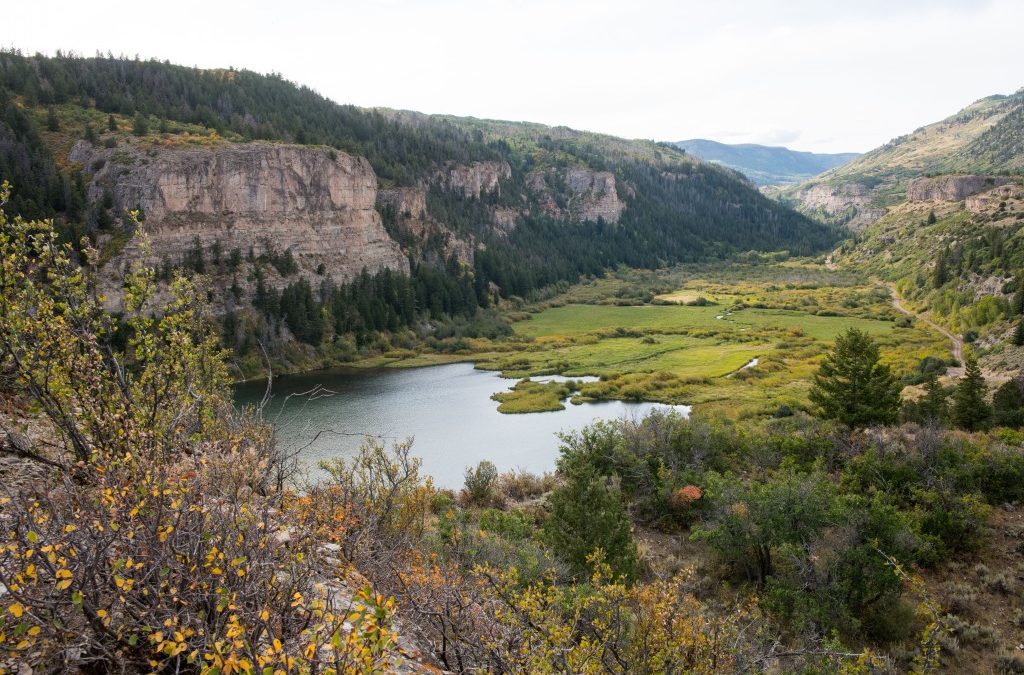 A 488-acre parcel of land adjacent to the Flat Tops Wilderness Area that includes one of the state’s largest natural lakes will be Colorado’s 43rd state park.

Gov. Jared Polis and other state and federal officials announced Wednesday that Sweetwater Lake in Garfield County, about 30 miles north of Dotsero, will be managed under a first-of-its-kind arrangement with the U.S. Forest Service.

The formerly private site, whose owners through several decades included a Denver Post cartoonist and illustrator in the 1940s, a U.S. ambassador to NATO and a Chicago gangster, will be managed as a state park on national forest land.

In an interview with The Denver Post on Tuesday, Polis noted that Sweetwater Lake, which is in the White River National Forest, is the second new park his administration has approved. The first was Fishers Peak State Park near Trinidad.

Scott Fitzwilliams, supervisor of the White River National Forest, said there are a couple of examples in Arkansas and Arizona of the state taking over management of recreation areas on national forest land.

The transfer of the land from private to public lands began when The Conservation Fund, which works with private, public and nonprofit partners to conserve land, acquired the Sweetwater Ranch. A loan from Great Outdoors Colorado, funded by state lottery revenue, and local fundraising that included a campaign by the Eagle Valley Land Trust, made the acquisition possible.

The Conservation Fund transferred the land to the Forest Service, which received $8.5 million from the Land and Water Conservation Fund for the purchase. The congressionally approved LWCF money comes from a portion of revenues generated by offshore oil and gas development.

Fitzwilliams said the application for money to buy Sweetwater Lake was supported by Colorado’s congressional delegation and rose to the top of the requests. But Fitzwilliams said the Forest Service doesn’t have the resources, staff or funding to manage the site as a park and began talking to Colorado Parks and Wildlife about running it.

An agreement signed in 2019 by Polis and the U.S. Department of Agriculture, which oversees the Forest Service, helped clear the way for the partnership, said Dan Gibbs, executive director of the Colorado Department of Natural Resources.

“It spelled out how we would collaborate on a broad range of topics, including forest health, working on landscapes and natural resources,” Gibbs said. “This is a great example of this partnership.”

The Sweetwater Lake area is at 7,740 feet in elevation. Limestone cliffs tower above two sides of the 70-acre lake. The area has important wildlife habitat, including for the White River elk herd, the state’s largest, and for what is historically the state’s largest migratory deer herd, said Dan Prenzlow, director of Colorado Parks and Wildlife.

The area is also used by water fowl, raptors and has “robust fisheries,” Prenzlow added.

Sweetwater Lake serves as a staging point for hunters going into the Flat Tops wilderness. A.J. Brink Outfitters has run a hunting-guide business there. Fitzwiliams said state and federal officials will work with the business and with tribal members on conserving the cultural and historic resources. The Ute Indians were in the area for centuries, he said.

Prenzlow said hunting and other recreation are important to the local economy and local residents are excited about the land being maintained for those activities.

“But they also don’t want to see a city brought to their little mountain valley. So that’s something that we’ll contend with and make sure that we’re really sensitive to, as the governor talked about, providing just world-class recreation, but making sure we take care of those conservation values,” Prenzlow said.

Conservation was at the heart of putting the site in public hands, Fitzwilliams said. A small part of the area that touched national forest land was open to the public. However, several proposals for major developments were made through the years.

“There have been proposals for golf courses, a water-bottling company, condominiums,” Fitzwilliams said. “Any time you have that much private land with water, both irrigated and the lake, the potential for development is high.”

State and federal officials said they will write a long-term management plan. The goal is to have a new boat ramp in place and available to the public by June 2022 and add more amenities later.

Colorado’s parks and public lands provide the foundation for the state’s $12.2 billion outdoor recreation and tourism economy, according to the governor’s office.

“This is a great opportunity for conservation, for recreation and our economy,” Polis said. “Our state parks are really a critical part of who we are and this is going to be a fitting and exceptional addition to our state park system.”