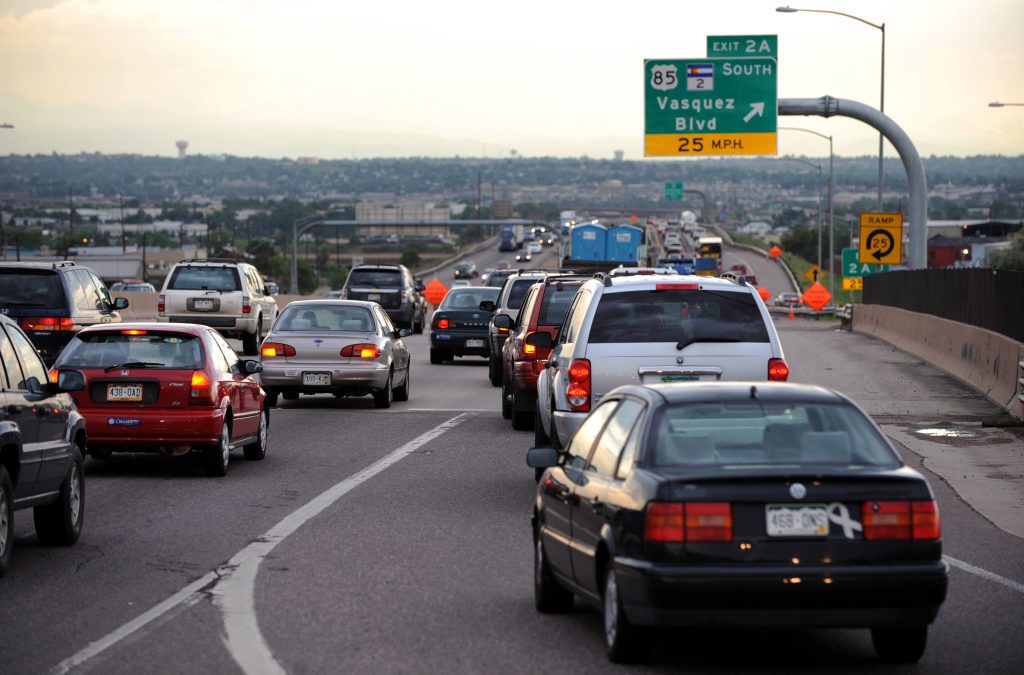 Past attempts by the Colorado legislature to boost funding for the transportation system have looked firmly toward the future, charting out ways to expand or improve roads and transit.

This time, lawmakers debating the latest and most ambitious proposal have one eye on the past — at the ways decades-old highways have divided neighborhoods and sent air pollution wafting toward nearby homes, including in some of Denver’s older neighborhoods.

Often those houses and apartments are still occupied by low-income families or racial and ethnic minorities, whose predecessors lacked political clout to fight the original construction.

A relatively small part of the now-$5.4 billion transportation bill being debated by state lawmakers aims to help right some of those past wrongs. Tucked into the sprawling 200-plus page Senate Bill 260 are plans for a $209 million fund that would pay for pollution- and traffic-reduction initiatives in the Denver metro area and the northern Front Range over the coming decade, with a particular focus on the marginalized communities that bear the brunt of the impact from highways.

That amount of money is significant for a first-of-its kind program in Colorado, advocates say — even as some environmental and community activists are skeptical.

They worry any positive effect would be outweighed by the effects of some new highway projects set to be unleashed by the bill, including the Colorado Department of Transportation’s plan to reconstruct and widen Interstate 270 through industrial sections of Denver and Commerce City.

“The way my community sees it is that this is loading a gun that will be put to our head on I-270,” said Ean Thomas Tafoya, a field advocate with GreenLatinos and co-chair of the Colorado Latino Forum. He’s also a veteran of the years-long community fight to stop the Central 70 project, which is underway now on Interstate 70 in northeast Denver.

But Sen. Julie Gonzales, who represents northwest Denver, said in an interview that the new state fund, coupled with more stringent planning requirements throughout the bill, would mark “a sea change” from the kind of approach taken by the Colorado Department of Transportation in the past. She pointed to the I-70 project, in which activists fought hard for concessions meant to soften the project’s impact.

“This bill forces CDOT to take particular care to focus on disproportionately impacted communities — poor people. People who live a couple hundred feet from a highway,” the Democrat said on the floor last week before SB-260 won approval in a 20-15 vote, mostly along party lines.

Gonzales pushed to beef up provisions in the bill that would require transportation planners at CDOT and the regional level to take community-impact considerations much more seriously as they put billions of dollars to use for road projects and other spending in coming years. Any major projects that would expand highway capacity would face a new level of reviews to evaluate how they would affect air quality and vehicle traffic levels, on top of federal requirements.

Rueben Sanchez, who has asthma, speaks in March 2018 about health problems in neighborhoods near the Interstate 70 viaduct through north Denver neighborhoods during a “Ditch the Ditch” news conference. The $1.2 billion Central 70 project that he and other activists opposed began later that year.

CDOT executive director Shoshana Lew has embraced many of the changes publicly, telling lawmakers that some of them reflect the department’s evolving approach toward projects.

“It was done too late in the game on (the Central 70) project, but I think a lot of the lessons from those hard conversations are pushing CDOT as we think about the investments of the future,” Lew told a House committee Monday night before it advanced the bill on a 7-4 vote.

Gonzales also successfully amended the bill to bolster the new Nonattainment Area Pollution Mitigation Enterprise by $25 million in contributions from the highway fund over several years. It’s named after the federal designation for areas that exceed limits for pollutants, in this case ozone. Last year, the Environmental Protection Agency declared Colorado a “serious” violator of air quality standards, based on Denver and the northern Front Range’s readings.

The rest of the fund’s money would come from proceeds of new fees on deliveries and ride-hailing services including Uber and Lyft — part of a larger package of fees that would raise $3.8 billion for various aspects of the bill.

It’s still a little hazy how the nonattainment fund’s money would be spent, but the decisions would be made by a board that includes representatives of hard-hit communities. Potential projects could pay for programs that give drivers bus passes for their commutes, for example, or directly reduce pollution by retrofitting construction equipment, installing roadside vegetation and planting trees in medians.

The proposed fund is modeled in part on the federal Congestion Mitigation and Air Quality Program.

Under the bill, another state fund geared toward supporting alternatives to driving — including transit and bikeways projects — would get a projected $450 million over the next decade, along with an expanded mission of helping to minimize or offset the pollution effects of new highway projects.

Danny Katz, director of the Colorado Public Interest Research Group, said he was not yet supportive of the overall bill but praised the components worked on by Gonzales and other lawmakers.

“I think the big goal we need to have is a transportation system that isn’t poisoning our air and negatively impacting our communities,” he said. “So much of our transportation system, we’re stuck with decisions made 20 or 30 years ago” — and the bill attempts to grapple with their effects.

Tafoya was among advocates who aided Gonzales’ effort by lobbying the governor’s office and other lawmakers to make the planning provisions more stringent. But he’s among those who feel the bill still tilts too heavily toward road projects.

Morning rush-hour traffic moves along on Interstate 25 near Speer Boulevard and West 23rd Avenue on Sept. 25, 2019.

Another potential CDOT project that worries him is loose plans to reconstruct Interstate 25 near downtown Denver, which also passes near low-income communities such as Sun Valley.

“Additional funds for mitigation in communities that are already harmed is positive,” he said. “But we’re not going to trade crumbs for more harm.”

As for the potential I-270 expansion, for which CDOT is planning but lacks the full $400 million in funding, Lew defended the need this week.

“Modernizing it is due in part to the timing of its decay,” she said.

But such projects — and the huge transportation bill — still face skepticism among some residents, including Shaina Oliver, who lives in northeast Denver and testified against the bill Monday.

“Our air has not improved and it is only getting worse,” said Oliver, a self-described Indigenous rights advocate who nodded to the effects of past highway projects. “Our communities are not against road maintenance or repairs, accessible (electric vehicles) or increased public transit, but Senate Bill 260 does not ensure the economics of disproportionately impacted communities.”